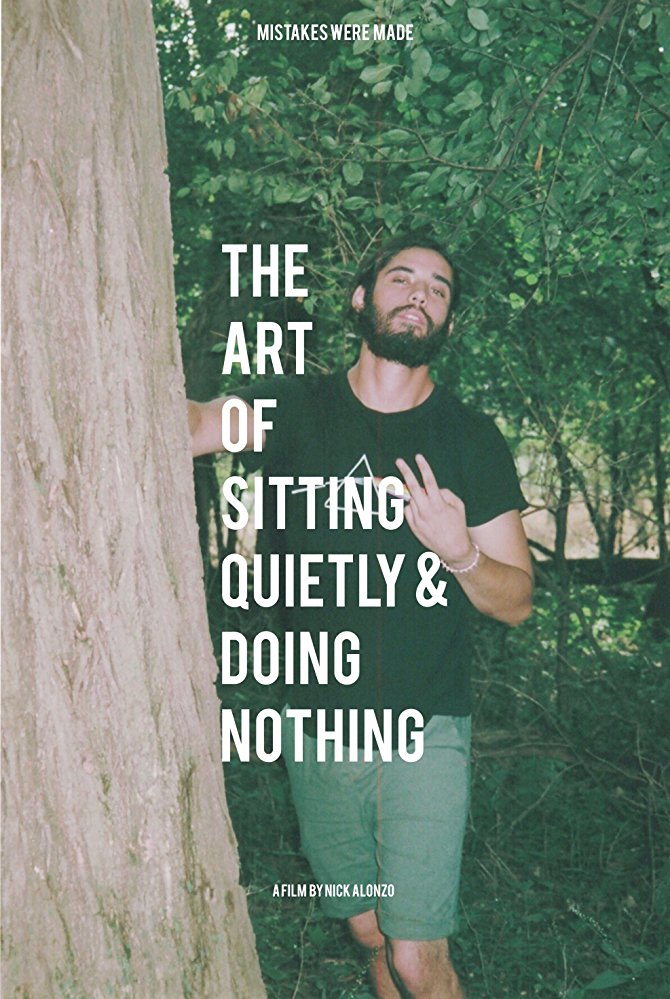 A forest can be an independent filmmaker’s best friend. Lush greenery provides production value like nothing else, and the sense of isolation and remove from urban life can be effectively used for peaceful, low-key drama or tense horror equally well. There is a strain of “man alone in the wild” movies that has become more popular in the last several years as digital filmmaking technology has made it much easier to head off into the woods with a camera and a game cast member or two and come out with enough footage for a complete movie in the can. Trevor Juras’s The Interior used gorgeous forests to comedic and horrific effect with basically one actor and some excellent cinematography, and Daniel Robinson made his directorial debut Nestor entirely on his own with no one else either behind or in front of the camera. Chicago-based filmmaker Nick Alonzo’s The Art of Sitting Quietly and Doing Nothing enters the pantheon of “man alone” films with its own highly unique style and deadpan humor.

Carl (Alex Serrato) is roughing it for an unknown period of time. When the audience first meets him, he’s keeping a journal of how poorly things are going out in the woods–there’s no food and it’s really hot. Worse, he can’t even masturbate without thinking of Gloria (Alycya Magana), the woman who just dumped him, and immediately losing his erection. He wanders around a forest which is pretty clearly not far removed from civilization. He sets up camp near a fence, and occasionally a hiker can be seen and vehicles or planes heard in the background. While he half-assedly tries to make a go of it with his copy of Bradford Angier’s How to Survive in the Woods, the film cuts back and forth between his present and the time leading up to his self-imposed exile from society. Unsurprisingly, it doesn’t seem like he was doing a great job living an actual life among other people, either. As his supply of food (mostly consisting of canned lychees) dwindles Carl decides to turn to some mushrooms his drug-dealing neighbor gave him for sustenance, which goes much worse than one might expect.

Nick Alonzo’s debut feature Shitcago was a black and white tour around the city where Alonzo lives (shot entirely without permits!), and his new film has an element of that as well. Shot largely in nature preserves and parks around Chicago, The Art of Sitting Quietly and Doing Nothing also uses a handful of locations in the city to establish a strong sense of place. For example, Carl works in a shared office space where the frames on the facade of each space recall prison bars as he makes his way endlessly back and forth from his desk to the kitchen where he makes instant coffee. It’s a location that will be immediately familiar to many viewers who have worked for small tech companies and/or temp agencies, and along with his nighttime wanderings around his neighborhood tells the audience quite a bit about him without relying too much on exposition. Alonzo takes the maxim to “show, not tell” to heart and presents a fine example of just how it’s done.

While its scope is somewhat more narrow, this is a much more ambitious production than Shitcago and accordingly Alonzo enlisted more help behind the scenes to realize his vision. Cinematographer Nicholas Daniel Sledge does fine work in making the forest and Carl’s everyday life equally “real” while establishing them as distinct visual entities, and David Avalos’s sound work really makes the woods feel like an enveloping space. In addition to shooting the film in color, Alonzo also includes an animated sequence by Dominique Bloink that kicks off the film’s final act in which reality is constantly in question. Alex Serrato has the unenviable task of carrying the entire movie–he’s in virtually every frame of it aside from the animation–and walks a careful line between making Carl just relatable enough to keep watching while never being a sympathetic figure. Alonzo sneaks in a lot of dry, absurdist humor throughout the film and as weird as things get the tone never veers too dark. The Art of Sitting Quietly and Doing Nothing is a solid independent comedy and a tribute to its writer/director’s ingenuity, a worthy entry into the “man alone” subgenre and a highly unique “Chicago movie.” 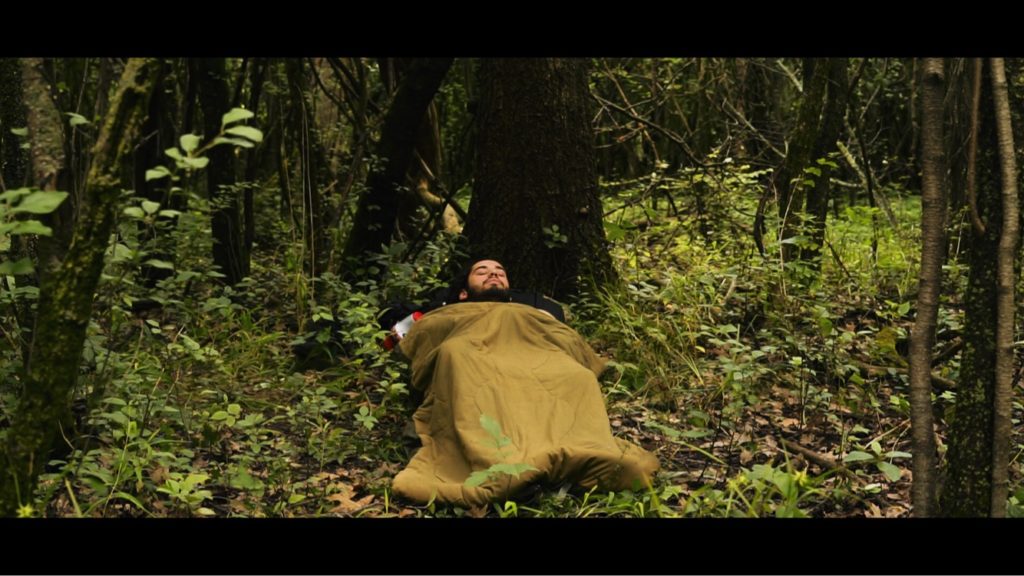 The Art of Sitting Quietly and Doing Nothing screens at The Nightingale in Chicago on Friday, May 4th at 7:30 p.m. Writer/director Nick Alonzo and members of the cast will be in attendance, and the Q&A for the screening will be moderated by Chicago-based filmmaker Michael Glover Smith (Cool Apocalypse, Mercury in Retrograde).