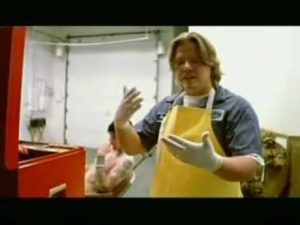 It’s funny how things sometimes work. DELUSIONS IN MODERN PRIMITIVISM was recommended to me a few weeks ago by DAILY GRINDHOUSE contributor Rob Dean (who has made me aware of so many great short films during this column’s lifespan, I almost feel like he should be running it). Despite thinking it was brilliant, I decided there were no overt grindhouse elements and therefore, not for the site. But while I took a break last week from working on this column, the film stuck in my mind and I only loved it more as I thought about it. Plus, I started to consider that we do regularly cover comedies, violent satires, and some straight-up art house fare. Why should mockumentaries be left out?

That is a long set up to present a short film that I will tell you not a single thing about so that I do not spoil any of the joy of watching it for the first time. It is a hilarious, scathing satire that dissects its subject with a razor-sharp scalpel. It is also proof that a comedy can amp up as much suspense as a thriller or horror film. Watch this one and enjoy.