Aria Emory is the co-writer and star of DRIFTER, described on its Indiegogo campaign site as “a micro-budget action/thriller feature film inspired by films such as THE PROPOSITION, WOLF CREEK and MAD MAX with a little bit of TEXAS CHAIN SAW MASSACRE thrown in for good measure.” The film follows a pair of outlaw brothers, Dominic and Miles Pierce, who take a detour through a post-apocalyptic wasteland to the town of Deml. They soon discover the town “is inhabited by a family of cannibalistic lunatics and their sadistic mayor, Doyle,” and have to fight for their lives to escape. Emory plays Miles Pierce, and DAILY GRINDHOUSE got the chance to chat to him a bit about this experience.

DG: Your Indiegogo campaign says DRIFTER was inspired by films such as THE PROPOSITION, WOLF CREEK and MAD MAX with a little bit of TEXAS CHAIN SAW MASSACRE thrown in. How did you incorporate all these influences while still creating a unique film?

AE: Well, we started in California, where there are a lot of deserts. In terms of the style, MAD MAX was a big influence, but the tone of the film is more like the TEXAS CHAIN SAW MASSACRE. But really the person responsible for setting that was the director, Chris von Hoffman.

DG: You co-wrote the film with director Chris von Hoffman. What was the collaborative process of writing the film like?

AE: Chris and I had been friends for a few years. We created the story and the characters together, and then he’d write something to me, and I’d write something and send it over to be edited. This was all happening around 2014-2015ish. First I would make sure I was writing the story I wanted to tell, and then I would try to make it feasible. But since we were friends and had that comfort level working together, there was a kind of shorthand. 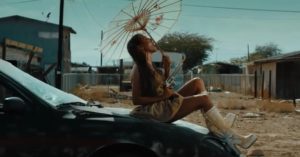 DG: Early on in the film, Miles is perceived as the weaker character, even though he ends up having to use a lot of survival skills. How did this evolution affect the way you played the character?

AE: In writing Miles’s character, we wanted to show it was his environment that tainted him. One of the most challenging things was shooting out of order, but we wanted him to be the result of all that had put him through. We only had thirteen days to shoot, so we all had to be very efficient. I think we all understood the character as a product of his circumstances.

DG: You have good on-screen chemistry with Monique Rosario, who wants to be Miles’s protector in the film. What was your working relationship like?

AE: I knew Monique before, and we became good friends, so it was very easy to work with each other. That relationship was very easy. There was a tough scene we had to do together with no dialogue, and we did it very naturally. It was a very calm environment.

DG: The film has at least a few scenes of drawn-out, intense violence. Why did you feel the violence was necessary to tell this story?

AE: I wanted to show the pain Miles had to go through to survive on his own. The violence is related to the intensity of his character and his entire character arc.

DG: Although the town in the story is populated by sadistic cannibals, they have developed their own mayor and code of existence. How did you and Chris von Hoffman go about developing this hierarchy and world?

AE: The film takes a left turn about halfway through. Chris always had a very specific vision for the visuals and the hierarchy created, with a military type overview. On set, we made sure everyone knew their place. In the writing process, we discussed the characters of the town and it was very important for everyone to have their own personality.

DG: The character Vijah in the film seems to have learned enough to peaceably co-exist with the cannibals while still removing herself from their excess. What did you envision as the backstory of her character?

AE: She has her own moral code. She lost her family within the town and got stuck there, but mentally didn’t fall into the same pitfalls. And the town mayor has fallen in love with her and wants to keep her around.

DG: Chris von Hoffman’s technique is very stylistic and draws from his influences. What was it like to work under his direction?

AE: Well, he really worked with every actor. We only had thirteen days to shoot so everyone had to be really efficient, but Chris is a strong leader, and he makes you want to work harder.

DG: You have a background in theater. How did that channel into playing a character like Miles?

AE: I had written a play a year or two before, and I think the best training for an actor is on the stage. I grew a lot as an actor there, which made the film much easier.