Clearly, we love the PHANTASM films around these parts. But for such an iconic franchise, it has been difficult to find decent home video presentations of the films. The first four all received DVD releases—most at barebones standards, but until last December’s Blu-ray releases of the first film and PHANTASM: RAVAGER, only the studio-backed PHANTASM II had received an HD presentation. 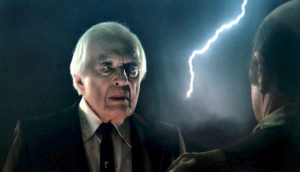 Sometimes, good things come to those who wait, and phans of Reggie, Mike, Jody, and The Tall Man are being gifted with two Blu-ray box sets of the entire series this spring. In the meantime, as of yesterday’s addition of RAVAGER, () four of the five films (with the exception of PHANTASM II) are now available on SHUDDER. Even better, the version of the first film that is available is the painstakingly restored 4K remaster with a 5.1 surround sound mix. This remastered presentation is exclusive to Shudder.

To whet your appetite, you can check out this opening clip from RAVAGER that SHUDDER has made available.

RAVAGER  may be the end of the line for the long-running franchise, but you can now hit the remote and watch the surreal, dimension hopping adventures of Reggie and the gang anytime. What are you waiting for, Boooyyyy?