Admittedly, UNBROKEN GLASS is not the usual type of film we review here at DAILY GRINDHOUSE. But we love all good films and it does not hurt at times to expand our coverage beyond the grindhouse to the arthouse.

At the age of six, Sabu’s parents died within a few weeks of each other. They left behind not just Sabu, but four other children ranging from him as the youngest to an oldest sister of 21. Instead of breaking up the family to be raised by different aunts and uncles, the children more or less raised each other. Since all of the children are seen early on in the documentary as seemingly well-adjusted adults, the drama in their situation is not immediately apparent. But that changes when Dinesh, now in his mid 20’s, seeks to understand the forces that broke his mother and led to her death by suicide not long after his father died of cancer. 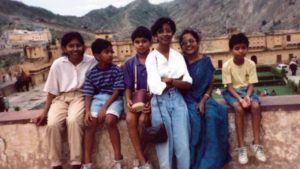 Sabu’s mother suffered from schizophrenia—a fact that he has always known, but that did not mean much to a six-year-old who just assumed it was normal for his mother to alternate between days of cold distance and the extreme paranoia that led her to constantly accuse her husband of having an affair. But as an adult who suffers from depression, Sabu wants to dig into the past and try to understand his parents as more than a mentally ill woman and an overwhelmed father with anger issues.

The journey of the film takes Sabu across America and his parents’ native India, talking not only to his siblings, but also aunts and uncles, a grandmother he barely knows, and a crackpot scientist who worked with his chemist father. What he uncovers is not exactly revelatory (he seems to have known most of the details he finds out before starting the film), but in this case, it is the journey that counts.

A striking scene early in the film involves Sabu’s brother Sandeep avoiding sharing much in his way of memories about their parents before requesting to question the director on camera. As soon as the roles are reversed, his brother explains that the past he is digging into is too painful and he does not want to be interviewed anymore. It is uncomfortable to watch and highlights the fact that Sabu is trying to deal with his parents’ legacy through art—filmmaking, in his case—but that way of dealing is not therapeutic for everyone. This is especially true when it is understood that schizophrenia can be a hereditary disease. Given the gradually reduced role of all but his sister Seema in the film, it may be that more of these types of conversations happened off camera. Such is the danger, but also the intriguing nature of a personal documentary like UNBROKEN GLASS. 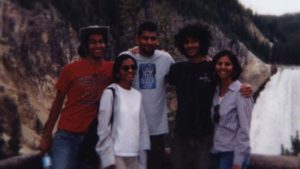 While the film deals with tough subject matter and does not shy away from the pain for everyone involved, it is also thankfully very funny at times. Sabu, having been born and raised in America, panics as he tries to learn traditional dance moves for a cousin’s wedding in India. An interview with his aunt and uncle is both funny, but also squirm inducing as his uncle fudges facts to make himself look better and his aunt angrily calls him out for every stretch of the truth. The best moment is meeting up with a professor who worked with his father to try and prove that the sun is mostly composed of iron and therefore global warming is an impossibility—a conversation that makes him question if his father was not the brilliant chemist he always believed him to be and was maybe kind of a loon.

UNBROKEN GLASS clocks in at just under an hour, ending on an uplifting note. It is a pity that Sabu did not see fit to extend the film by ten to fifteen minutes because I feel that the story of how the siblings stayed together with oldest sisters Didi and Seema taking care of three young boys is just as interesting as the story of their parents. This is touched on in the film, but it is an aspect that is quickly left behind as Sabu continues to dig deeper into the more distant past. 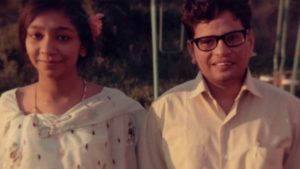 Where the film eventually runs into trouble is that there can be no real resolution to Sabu’s search for understanding. Schizophrenia changed his mother from the woman she was into someone completely different. It nearly wrecked her family and led her to take her life. This is undoubtedly a tragedy and it is sad that Sabu never really knew his mother because of this, but it is also close to a damn miracle that he and his siblings have turned out as well as they have. 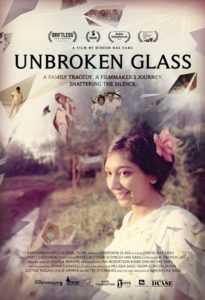