LAVENDER is a spooky psychological thriller featuring Abbie Cornish as Jane, a photographer of old houses who suffers severe memory loss after a traumatic accident and goes to visit her childhood home hoping to recover. Her home was once the site of a horrific crime that claimed the lives of her foster family members, and some strange clues have suggested that Jane may be responsible for their deaths. Co-writer and director Ed Gass-Donnelly keeps the tension and fear high and keeps the audience guessing until the end about Jane’s role in her own story, and what demons are real and which are just in her imagination. DAILY GRINDHOUSE got the chance to talk to him about what makes a strong psychological thriller.

DAILY GRINDHOUSE: What inspired you to come up with the story based on memory loss?

ED GASS-DONNELLY: [Co-writer] Colin [Frizzell] originated the idea and had the original script. A guy was the protagonist. We were trying to figure out what to do with the idea of memory loss. I liked the idea of it driving an obsession, like photographing houses because you have these repressed memories.

DG: Jane’s childhood home plays a big role in the story. How did you bring that haunting atmosphere to life?

EG: Well you get tax credits to shoot in certain areas, and the style of farmhouse I wanted we weren’t finding in those areas. I was looking for a certain style, and the space around them is very important—I just kind of wanted a stark house in the middle of nowhere. Finally we found the right house and after that, the single biggest thing became the lighting. If we had more money, we would have built a set. But Brendan [Steacy], our cinematographer, created space by knocking down walls and using these little LED lights. 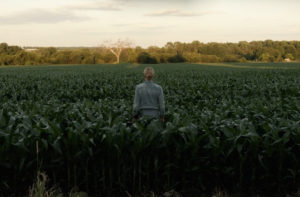 DG: You had some fairly recognizable names in the cast. What was it like to work with Abbie Cornish, Justin Long, and Dermot Mulroney?

EG: They’re all lovely people. When you work with good human beings, you have much more fun. We didn’t have a lot of money, so you have to hope they’d want to work on an artistic project. But I’ve always been lucky to work with good people.

DG: How did you set LAVENDER apart from other repressed-memory thrillers? Were there any cliches you were trying to avoid?

EG: Well, there’s always tropes and familiarities. We were originally going to shoot in the fall, and then I thought with these tall cornfields we were ripping off CHILDREN OF THE CORN. Then we ended up shooting in June, so I re-wrote it to be lush and green. The hay maze was originally going to be a cornfield maze, and that was supposed to be a nod to THE SHINING. What I really wanted to do was make a movie that evolved out of a character. But some people would watch it and say I was ripping off a movie I never heard of. Your tastes are always influenced by what you’ve seen, what’s in your subconscious since you were a kid, and why you think cornfields are creepy. If you know every movie and know every reference, you still have that.

DG: The supernatural elements are very subtle for a genre film. How would you classify this film, and why?