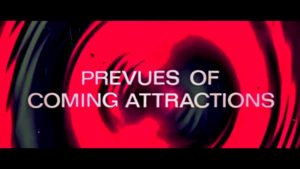 Made up of three EC Comics-style morality tales and a sinister wrap-around segment, Cundieff and Scott give the traditional horror anthology their own twist, focusing on socio-political stories that impact the African-American community. The film deals with such ugly topics as police brutality, domestic violence, and black-on-black crime with a tone that hovers between dark comedy, traditional scares, and bleak satire. Perhaps best remembered for Clarence Williams III’s truly unhinged performance as Mr. Simms, the mortician who uses three corpses in his funeral home as the jumping off point for each story, TALES FROM THE HOOD also benefits from a stacked cast of genre veterans including Rosalind Cash, David Alan Grier, Wings Hauser, Roger Guenveur Smith, Duane Whitaker, Corbin Bernsen, Art Evans, Michael Massee, and Anthony Griffith.

The film was a modest success when released, but has developed a large cult following in the last twenty years that makes the anticipation for this Blu-ray release very high. With that in mind, Scream Factory is not skimping on the bonus features:

(From the press release)

TALES FROM THE HOOD is currently available for pre-order from Scream Factory.