1977’s DRIVE-IN MASSACRE is one of those genre films that’s almost invisible in its omnipresence. Released on VHS multiple times by multiple labels (in the United States alone, the title cropped up via Cult Video, Paragon Video and Magnum Entertainment) and then issued even more times on DVD as part of multi-film bundles and on its own in cheap packaging, haunting the racks of bargain bins everywhere. If you’ve been any kind of a horror movie DVD collector, you most likely own a copy of DRIVE-IN MASSACRE whether or not you intended on purchasing it in the first place. It’s one of those movies, like SILENT NIGHT BLOODY NIGHT, DRILLER KILLER or THE TERROR, that’s just kind of there, so much that it’s easy to forget the film itself. (Heck, its public domain status means it’s even available on archive.org, so it’s no wonder that it’s commonly used to fill a vacant slot.)

Even with the myriad of venues to watch DRIVE-IN MASSACRE, however, viewings of the movie never quite felt complete. In part, this was due to the very half-assed nature of the film itself (and I’ll get to that in a bit), but virtually all of these increasingly cheap releases presented the film in such dire condition that seemed to be the result of a print being dragged through mudslide, stomped on, and then color-corrected into darkness to the point where certain scenes were outright impenetrable. Coupled with the film’s naturally incomplete nature that just created more questions than answers, an omnipresent movie with a fantastically lurid title and premise basically vanished via dismissal into thin air as even the stalwarts who could get through the murky viewing found themselves just confused by the movie itself. As a result, DRIVE-IN MASSACRE grew a reputation of not just being a “bad” movie, but an unwatchably bad one from which one could glean no sense of enjoyment, more a MONSTER A GO-GO than a MANOS. 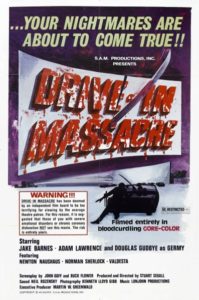 Severin Films, never one to shy away from a challenge, have taken on the task of rehabilitating DRIVE-IN MASSACRE with a new Blu-ray edition loaded with extras that delve deep into the mysterious nature of the film itself, and presenting the flick in a new light restored from an original camera negative that finally brings the contents out of the shadows. It’s a welcome release, because while DRIVE-IN MASSACRE is a bizarre jumble of a movie, most genre fans are just as fascinated by the world that created and released sleaze oddities as they are by the films themselves. In addition, it’s a release that finally allows the film to be appreciated for what it is, rather than the dingy, barely-visible puddle of cinematic sludge that’s represented it for the past forty years.

This doesn’t mean that actually being able to see it suddenly turns DRIVE-IN MASSACRE into an unseen classic, though it does live up to its name. Shot primarily at a drive-in theater, the film opens with a couple talking about moving in together, being pregnant, and looking forward to their future lives. Naturally, this peaceful duo finds their pleasant cinematic evening interrupted when the man is decapitated when he attempts to grab the speaker. It’s the type of brutal-yet-clumsy scene that ‘70s drive-in movie aficionados will love seeing in head-splitting color.

The rest of the film never quite lives up to the first five minutes, but no movie that takes place almost entirely at a drive-in can be all bad. The murders are investigated by a pair of detectives, one a schlubby, middle-aged white guy and the other a schlubby, middle-aged white guy. Among the suspects are the drive-in’s manager Austin, a spiteful persona about two bitchy insults shy of being a character in a John Waters movie, Germy, an ex-sword swallower who now works at the drive-in as a janitor, and Orville, a peeping tom who has a tendency to spy on the customers making out, usually just before they’re offed. 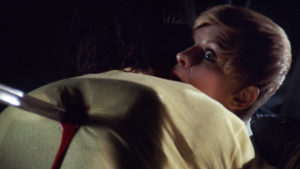 DRIVE-IN MASSACRE presents a bizarre issue in that the fact that the movie doesn’t have any kind of satisfying resolution – it ends with a notoriously absurd warning that killings like the ones depicted were happening in drive-ins across the nation and no revelation as to the killer within the film – that the plot synopsis above serves as, effectively, a complete spoiler as to what actually happens in the film. So is “nothing really happens after this point,” in fact, a spoiler? What sort of information about a film should be revealed in a movie that’s sort of unknown, but has been around for four decades? How the heck do you even write about something like DRIVE-IN MASSACRE to an audience that may or may not have seen it? Do you just keep asking rhetorical questions? Yes? Probably? No.

Clocking in at 74 minutes and featuring many scenes that contain way too much dialogue to warrant even that length (save for any scene with Robert E. Pearson’s vindictive Austin), DRIVE-IN MASSACRE is almost a minimalist grindhouse horror film, given the framework skeleton of a basic plot and virtually no flesh, muscle or circulatory system to give it life. It’s practically experimental in nature, and the behind-the-scenes recollections present on the disc attest to the fact that they just wanted to make a horror film that directly spoke to drive-in audiences, and didn’t really care about putting together a coherent result. It’s professionally shot, and the extensive backgrounds of those who worked on the project do show even in scenes when it’s clear that everyone involved is on autopilot. 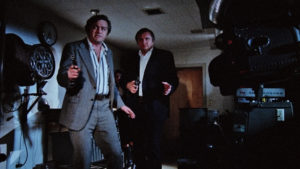 As much of a mess as DRIVE-IN MASSACRE is, with recurring themes that add nothing (strangely, the second murdered couple is also pregnant, a revelation that kind of loses its shock value by this point in the film) and nonsensical dialogue (“There is no overall pattern to a psychotic killer. If there is a pattern, it becomes an individual thing.”), it’s still a strangely entertaining film and it’s fantastic to finally see it in all of its gory detail. It’s truly a great restoration, and while having vivid colors is never going to propel the film into making sense, it’s good to finally be able to judge the film on its own merits rather than those foisted upon it by years of shoddy transfers.

While the mysteries within the plot of DRIVE-IN MASSACRE will never be fully answered, Severin has done a commendable job in making sure that the mysteries of its creation are addressed in full. The most valuable asset on the disc is a feature-length commentary track with director Stu Segall, the future “Silk Stalkings” and “Hunter” producer who also directed the Marilyn Chambers classic INSATIABLE as well as psychotronic flicks like THE SUCKERS (out from Vinegar Syndrome) and fellow bargain DVD staple C.B. HUSTLERS. Segall talks affably and candidly about both the film, noting that some scenes are “five times longer than it should be” and is quite frank about the addition of the final scene featuring writer George “Buck” Flower that was added just to make the film feature-length. He even talks about falling asleep during the shooting! Not limited to discussing the film itself, an occasionally-heard moderator also has Segall go into detail on his career, mentioning the trick of editing softcore versions of hardcore films, and pointing out how his hardcore career didn’t matter once he’d gotten successful enough. 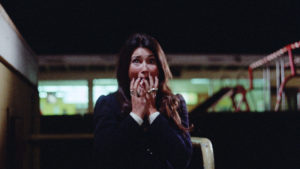 Segall is also on hand for an on-screen interview, adding more stories of the film’s creation. Also on the disc is an interview with John F. Goff, who co-wrote the film with Flower and stars as one of the detectives, including footage shot at a screening of the restored version of the film. The disc is rounded out by an interview with Norm Sheridan, who played the peeping tom Orville in the film – like much of the cast, using a pseudonym due to the non-union status of the film. All interviewees fondly recall character actor Flower, a familiar face in exploitation film – Goff in particular recalls him well, as the pair became good friends and appeared together in John Carpenter’s THE FOG and THEY LIVE as well as appearing in the Flower-penned Cinemax staple TAKIN’ IT ALL OFF. A trailer and a nifty reversible cover (allowing you to feature the completely misleading artwork of a hooded figure in your collection if you so desire) round out the disc’s components. 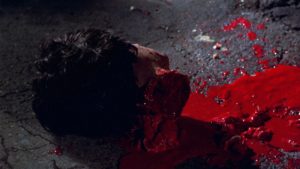 DRIVE-IN MASSACRE, the film, may never quite live up to the promise that the premise and deceptive artwork set up for it, and the film will always be a mess no matter how well it’s restored. However, DRIVE-IN MASSACRE, the Blu-ray, represents a fascinating and celebratory retrospective of such a notorious film, one that nullifies any of the previous releases with ease. It may not be a great film, but those with an interest in grindhouse film history will definitely want to add it to their shelves.