Home  ⁄  The Wire  ⁄  [Interview] Paul Davis, Author of BEWARE THE MOON: THE STORY OF AN AMERICAN WEREWOLF IN LONDON

John Landis’ AN AMERICAN WEREWOLF IN LONDON is still regarded as one of the greatest horror films of all time. It perfectly marries all the best things about the genre in one easy to digest bite. You’ve got the thrills and chills merging with the overt comedic aspects of Landis’ best work. It’s definitely one of the best examples of a horror-comedy, a sub-genre that usually falls flat on its face. Either it’s too funny, and not scary enough or it’s perfectly scary, but the humor is a resounding thud. AMERICAN WEREWOLF never makes this mistake. For years, the scariest sequences revolved around that terrifying subway pursuit of man and beast, or David’s surrealistic dream sequence involving his whole family being slaughtered. The comedic aspects fall in line brilliantly as well, from the hilarious cutaway to the Mickey Mouse toy while David suffers an agonizing transformation to the memorable daylight zoo encounter, the film deftly balances the light and the dark, and it’s all thanks to the ace filmmaking talents of John Landis.

Daily Grindhouse recently had some time to speak with Paul Davis, the author behind “Beware the Moon,” a two hundred page tome filled with the recollections of many of the key cast members of arguably the greatest werewolf film ever made.

DAILY GRINDHOUSE: :Paul, what’s your relationship with AN AMERICAN WEREWOLF IN LONDON BEGIN?

PAUL DAVIS: I first saw AN AMERICAN WEREWOLF IN LONDON back in February 1985 at the tender age of 3-years-old. I was a Michael Jackson fan at that age and had become aware of the film through the MAKING OF THRILLER. It was one of maybe five or six movies that I’d watch constantly on repeat and would never tire of.

Many years passed and I find myself writing for HORRORHOUND MAGAZINE putting together a 25th anniversary retrospective article to celebrate the film. It was while working on that particular article that I was inspired to make the feature documentary on the making of AN AMERICAN WEREWOLF IN LONDON titled BEWARE THE MOON. I worked on that, with fellow filmmaker Anthony Bueno, for close to two years before John Landis personally saw it included on the Blu-ray release of his film back in 2009.

The film has pretty much stuck with me for 30-years, and in all honesty, it’s a film I’m extremely proud to be associated to. 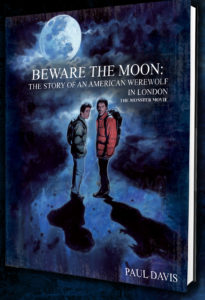 DG: It seems like horror fans are lucky these days with exhaustive books releasing and telling us the stories of our favorite films. What was the driving force behind getting BEWARE THE MOON into the hands of horror buffs?

PD: Even while we were wrapping on the documentary, I was already in talks with another publisher to release a book that would be a little more comprehensive. We were told so many great stories while filming that we just couldn’t include due to time restraints, so this would be my outlet for those. In addition, as soon as we wrapped the doc, several of key crew members that I couldn’t find suddenly reappeared – so I now had even more content to add.

For some reason or another, the book didn’t pan out as we finished the doc, however, earlier this year I saw the gorgeous 245 TRIOXIN – THE STORY OF RETURN OF THE LIVING DEAD by Gary Smart and Christian Sellars and loved its look and design. I got in touch with Gary and it turned out that he and his company, Dead Mouse Productions, self-published the book and before I knew it we had come to an agreement to adapt BEWARE THE MOON into a full color, 200 page, coffee table book.

With the deal in place and the blessing from John Landis, I then went about conducting new interviews with people that were not around for the documentary – most notably, Frank Oz, Brendan Hughes (one of the performers in the actual wolf costume), Gypsy Dave Cooper (from the SEE YOU NEXT WEDNESDAY porno) and members of Rick Baker’s crew, Steve Johnson, Shawn McEnroe and Kevin Brennan. In addition, I did brand new follow up interviews with both John and Rick to help round out everything that I needed for this to be the most complete chronicle on the making of AN AMERICAN WEREWOLF IN LONDON. In all it only took 15 weeks from the first conversation with Gary Smart to having a finished proof copy from the printers in my hand. 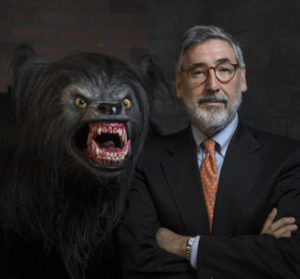 DG: What was the biggest revelation you learned while compiling interviews and writing the book?

PD: Jumping on to the book after a seven year break from the film, it was a lot of fun going back to the original unedited interviews that were shot for the documentary. Honestly, when I started talking to the new folks that I had compiled, I didn’t think I would learn anything particularly new that I hadn’t already been told by someone else who worked on it – but a 35-year-old movie can still surprise you. The biggest revelation for me was what the make-up crew went through on the pre-production of WEREWOLF. Back in 2007, when I first met and interviewed Rick Baker, he understandably wasn’t so keen to discuss the crossover between Werewolf and the abandoned Spielberg project NIGHT SKIES. However, since Rick posted a bunch of photos of the alien designs he did on Twitter, I felt the need to go back and find out exactly how much of an impact that had on the prep on American Werewolf. To my surprise it was HUGE! If you go and watch the BEWARE THE MOON documentary now, the pre-production is just too neat. The book gives the real story behind what the guys had to go through to pull off the amazing special effects that won Rick his first Academy Award.

DG: Was there anyone that you wanted to interview that you didn’t get to speak with, whether it was timing or an overall missed opportunity?

PD: While putting the doc together we did have correspondence with a couple of people that we couldn’t interview for one reason or another. In 2007 I had spoken to Lila Kaye on the phone (Lila played the barmaid in the Slaughtered Lamb) and while she was up for being interviewed, she was ill at the time and wasn’t comfortable being on camera. So unfortunately we couldn’t make that work and sadly, Lila passed away a couple of years later. The other person who graciously turned us down purely because of memory loss was Rik Mayall. He was ever so lovely and humbled that we asked him to participate in the documentary, but alas his memory was never the same after his quad bike accident in 1998. He wished us well and looked forward to the finished film.

DG: Was there any thought given to discussing the lamented and ill-received sequel, AN AMERICAN WEREWOLF IN PARIS?

PD: This is the easiest question to answer. No. 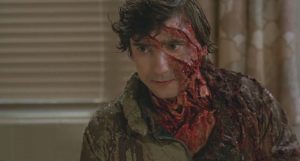 DG: Are there any other film-centric books on the horizon for you? Anything you’re ready to tackle next?

PD: Gary Smart and Dead Mouse Productions have pretty much asked me to name the movie and they’ll give me a deal for a second book. I’ve got an idea for another a new book but won’t get the chance to start work on it until late next year. It’ll be a huge undertaking that I’m sure would get as much, if not more, interest than BEWARE THE MOON – but assuredly, it would certainly get the same passion and attention as BEWARE THE MOON has.

In the meantime, I’ve got several movies that I’m attached to direct, some further along in development than others, so we’ll see what happens.

Many thanks to Paul for speaking with us.

BEWARE THE MOON is now sold out! Nice job, Paul. Let’s hope for a reprint!