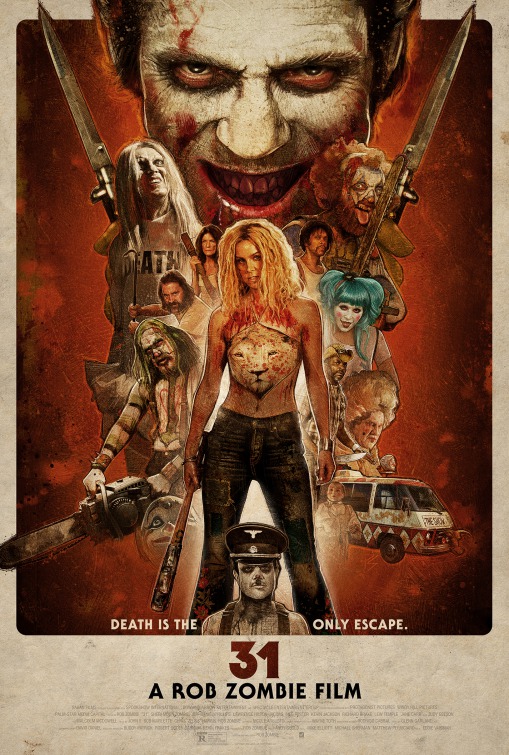 Is there a more divisive figure in genre filmmaking than Rob Zombie? Maybe Eli Roth, but that tends to come down to his personality, whereas while Zombie the man is generally pretty genial, his filmography splits people right down the middle. For myself, as long as I’ve been seriously watching movies, Zombie has always been present, and I’ve found myself in more than a few discussions defending his merits. But even my opinion varies; I think HOUSE OF 1000 CORPSES is okay, THE DEVILS REJECTS is a classic, his HALLOWEEN remake is pointless but I’ll ride or die for its sequel, and I believe THE LORDS OF SALEM is a beautiful failure. In all the valleys, though, I think his peaks are absolutely essential viewing, and the calling card for a legitimately important artist. 31, however, might just become the litmus test by which all other Rob Zombie films are judged. Because while 31 is presented as a straightforward film about murder clowns, it might actually be the closest we’ve ever gotten of Zombie’s pure id in all of its grimy fucked-up glory. Not only won’t it convert those who’ve already written him off, but it damn well might alienate his longtime fans. And frankly, after watching the film, I can’t help but wonder if that wasn’t exactly his intent. 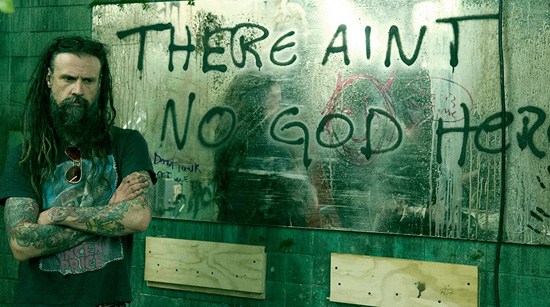 31’s plot, or what there is of one, basically revolves around a group of carnies whoare kidnapped on Halloween night and forced to play a game for the pleasure of a trio of flamboyant power brokers. The game is simple: Survive twelve hours while dealing with several waves of various “heads”, jacked up psycho clowns who each have their own distinctive grungy Zombie flavor. What follows isn’t so much a story as a stream of carnage peppered with distinctive characters and a real sense of Zombie throwing everything he loves at the wall and making a big ol’ Jackson Pollock of karo syrup and greasepaint.

In the recorded Q & A I watched after the film, a question brought up that 31 was born out of frustration with another film that just refused to get going, and Zombie basically said “well, shit I bet I could make a movie just from the first idea off my head,” and that idea was murder clowns. So on a certain level, this is the product of an artist who just wanted to create something, and that kind of approach can reap rewards creatively, but it’s a double edged sword if there ever was one. The production design is solid (even if its all located within what looks like an industrial plant), and all of Zombie’s usual touches of grime and neon are on full display. The proverbial “board” 31 is played on is filled with the kind of hellbilly aesthetics that Zombie has spent years constructing in his films and stage shows. There are doorways in the shapes of sex organs, dank jailhouses, grand demonic cathedrals, hallways stacked with Nazi memorabilia, and flickering hallways that would put an epileptic in a coma. The problem is that, although this world is filled with aesthetic details, it has no depth. We don’t know what the game of 31 ultimately is, outside your standard rich dicks playing with peoples’ lives, and even that seems like Zombie making it up as he goes along. 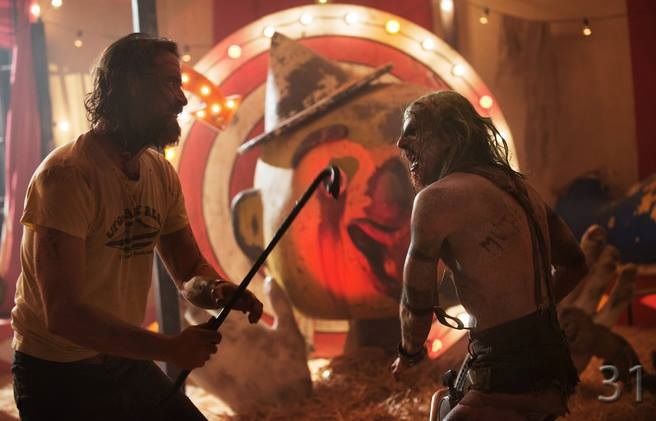 Look, I’m not a guy who needs things overly explained. I don’t need reasons explaining why a bunch of people are kidnapped to be hunted by psychos. I like ambiguity, and filmmakers allowing their audiences to make their own deductions within the text of their films, but 31 is not that kind of movie. Zombie is definitely operating in a heightened reality, and it works for him, but only so far. There’s a lot of talk of rules and odds, and viewership, but as the viewer we’re given no context for what any of this means. Sure, Zombie could be using this to throw us into the same kind of confusion to shake us up, just like the players forced into 31 against their will, but it’s also an omission that keeps us from fully engaging with the film, and instead of identifying with the characters and feeling like we’re going on a journey, you just keep getting ripped out of that feeling just as you’re becoming engaged, which results in an aloof viewing experience.

But the characters and their actors are the anchor of this piece, and they do their damnedest to keep the film right-side up. Zombie, much like Tarantino, has made a name for himself using underutilized character actors in exciting ways, elevating his films by virtue of being surprised at seeing what these actors can do when they dig deep. 31 definitely has that going for it with solid emotional work done by Meg Foster (THEY LIVE), Jeff Daniel Phillips (THE LORDS OF SALEM), Lawrence Hilton-Jacobs (WELCOME BACK, KOTTER), Kevin Jackson (ROSEWOOD), and Zombie’s constant leading lady Sheri Moon Zombie. The group gives off a genuine level of camaraderie before they’re abducted, a lived-in feeling that you believe, which is only accentuated when they start having to deal with their losses. There are at least four scenes that overcome the film’s pulpy roots and come close to being legitimately being emotionally devastating, and once again, you can appreciate Zombie’s eye for casting.

The flip side of that comes with the films “Heads,” who get such not-so-inspired monikers such as Sick-Head (Pancho Moler), Psycho-Head (Lew Temple), Schizo-Head (David Ury), Death-Head (Torsten Voges), and Sex-Head (Elizabeth Daily) who kind of run the gauntlet of Zombie’s particular affinity for deep-fried psychopaths. Like their more traditionally sympathetic counterparts, all the actors involved do solid work, but there’s barely any trace of the ragged humanity that Zombie brought to THE DEVILS REJECTS, so all involved are a bit more one-note than we expect from Zombie’s proper villains. There are moments, but the villains are ultimately just screaming loons who stay there until they’re dispatched — how long they stick around depends from clown to clown, although Zombie makes the head-scratching decision to bring a few back seemingly just because he came up with more jokes for them after the fact.

Of course, all these guys aren’t done any favors by the fact that the first one of them we see, and ostensibly the first figure in the whole movie we see is the lean snarling charismatic beast that is Richard Brake’s Doom-Head. Doom-Head is the kind of villain you expect from Zombie, and with Brake, he finds an actor he can use much in the same way as he did Bill Moseley, Sid Haig, or Tyler Mane. The guy’s a pure force of nature you can’t take your eyes off of, and in his greasepaint he inadvertently makes for a better Joker than Jared Leto could ever hope, with roughly the same amount of time he was given in SUICIDE SQUAD. Doom-Head doesn’t fix a lot of the larger problems in the film, but once he shows up he makes his namesake by infusing the last ten minutes of the film with a true sense of doom that you kind of wish the whole film was able to maintain instead of only during its memorable patches.

Like I said at the top, this film is not going to change anyone’s mind about Zombie’s work, but the hate I’ve been seeing doesn’t make a lot of sense to me. Although admittedly rawboned and maybe a little half-baked in some of its larger ideas, there’s something novel about seeing a bunch of middle-aged actors being able to get this down and bloody. Lest we forget, this was primarily a crowd-sourced project. the main selling point of which was to let Zombie really let loose — and whatever you might think of the final product, that’s exactly what you get. I can respect that. In fact, I think horror filmmakers ultimately need to make stuff like 31, because they allow their creators to shake out and see some of their indulgences for what they are, but also allow them to flex new muscles. I’m not saying this freedom ultimately created a great movie, but it’s entirely possible it’ll lead to one.

And hey, if nothing else, it gives you an excuse to see some clowns get destroyed, and who doesn’t want to see that? 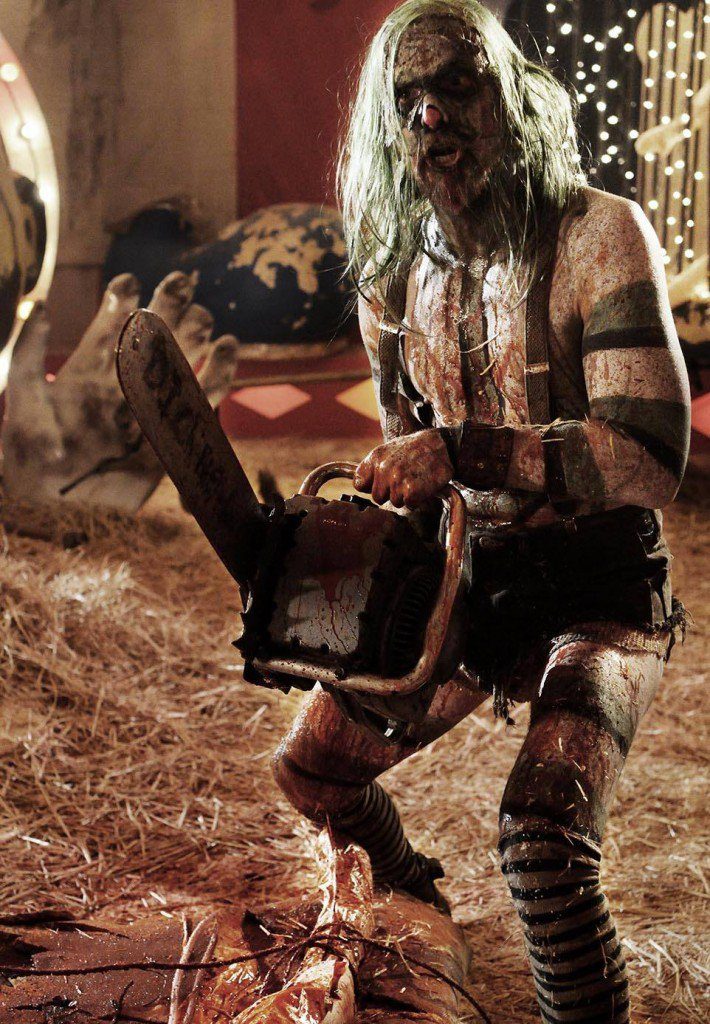