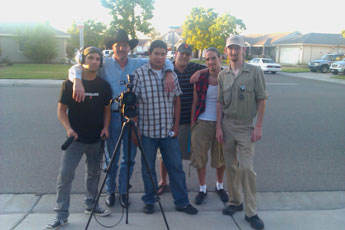 Sweetback (SB): What most immediately struck my about CINCO DE MAYO was its obvious passion and sincerity. Very rare in limited budget film-making. Do you think it’s important as a film-maker to engage the audience on a higher level, or do you think some projects lend themselves to bigger themes and ideas?

Paul Ragsdale (PR): I think it’s very important for a director to be thorougly invested in their projects. A film should mean something more to you as a filmmaker than just a story. I am very much a student of the “personal filmmaking” school of thought. I love the 1970’s work of Scorsese, Coppola, Schrader, Ashby and Cassavettes. Whenever I approach a project it has to mean a lot to me, even if the subject matter is silly or over the top like CINCO DE MAYO. What started out as a crazy and funny horror trailer about a killer Mexican teacher, turned into a movie about the absurdity of racism with references to Joaquin Murieta, Chicanoism, the Sleepy Lagoon case, the Trayvon Martin case, E. Duran Ayres’ comments about Mexicans being prone to violence because of their “Aztec blood lust”, and TEEN WOLF. Sometimes I felt I was going too far with all the references, but it doesn’t really matter if people pick up on them or not. I just hoped that at least some of the passion would translate to the viewer – which it sometimes does.

SB: I was a bit surprised that you chose to add film grain and damage (in the style of recent Grindhouse tributes) to your film, considering that its aiming much higher than your average slasher or exploitation film. What led to the decision to stylize things in that way?

PR: When we first conceived the project, we thought we were going to be making a straight up Grindhouse trailer along the likes of THANKSGIVING, with all the scratches and muted color. We were sitting around watching the Extra Weird Sampler from Something Weird and we ran through all the holiday themed slasher movies that had been done and we realized that no one had ever done a movie based around Cinco de Mayo! We immediately exploded with laughter and excitement and we decided to do it before Robert Rodriguez did it. I had the idea of mixing a slasher film with a Chicano social drama from the 1980’s – HALLOWEEN meets STAND AND DELIVER. So I wrote the killer as an Edward James Olmos type who can’t stand his lazy Mexican American students and kills them for not respecting “La Raza”. While it didn’t end up being a true slasher movie, I still wanted to emulate the 1970’s exploitation look and feel that I got from down and dirty movies like WELCOME HOME BROTHER CHARLES and ROLLING THUNDER, which were huge influences  Also the original fake trailer for FATHER’S DAY that Astron-6 made before they made the real film. That trailer blew my mind. And these guys are into VHS too so it just really made me feel like I was doing the right thing by embracing my VHS nostalgia.

SB: Talk a bit about A&P Productions, the production company you run with Angie De Alba. Your work so far has focused on films featuring Mexican-American actors in lead roles. Was that a conscious decision when you were forming A&P, or did it just seem natural to make works that focused on a group vastly underrepresented in genre cinema?

PR: Angie and I are both Mexican American and we have lamented that there aren’t many American movies aimed at people like us. There were a handful of movies made in the 1980’s and early 90’s, most of which starred Edward James Olmos, that addressed issues like ethnic identity, racism, gangs, social status and imporant things like that. And that’s fine once in awhile, but times have changed. We really wanted to see a movie where the characters didn’t care about “being Mexican”. We wanted characters who saw themselves as just regular ol’ Americans despite the fact that racism is still very much alive and that conflict found its way into CINCO DE MAYO. If this movie attacked the problem in a satirical way, then the next ones will totally move past it. When we imagine characters they just happen to look like us or the people we know. Its not something we strive to do, it just kinda comes out that way, which I think is a good sign. 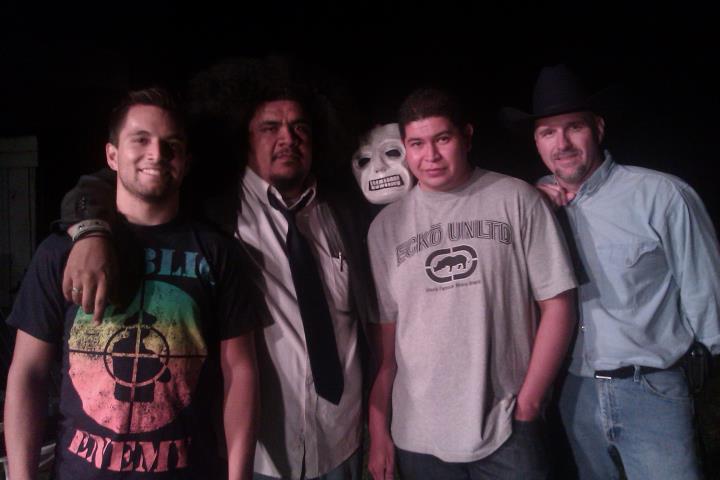 SB: You’ve worked extensively with your brother as a cinematographer. Do you find it freeing to be able to focus your attention on one role in a production, or do you prefer the control that you get from directing your own work?

PR: I love to do camera work, so I take any opportunity to do the cinematography on other people’s projects; it allows me to experiment with shots that I wouldn’t necessarily attempt on my own projects. Also it’s a great way to meet new people. I met alot of new actors by working on Matthew’s music videos. I do prefer to work on my projects with Angie because we share the same artistic interests. We make all our decions together; from the development of the script to the casting, wardrobe, style, locations, shots and the editing. We share multiple duties and it works perfectly for us because we share the same vision and are both passionate about the collaboration process.

SB: Talk about the casting of Anthony Iava To’omata as the lead in CINCO DE MAYO? What did he bring to the role that made him perfect to embody both a mild-mannered school teacher and a killer filled with “Aztec Blood Lust”?

PR: Angie and I first saw Anthony performing on stage in a play called “Los Vendidos”. We went to support our very good friend Joshua Palafox (who plays Israel in CINCO DE MAYO). We had already started talking about the concept of CINCO DE MAYO but we weren’t sure who would play the killer. Then we see Anthony on stage with his wild ‘fro, dressed up like a Mexican Revolutionary, holding a rifle and barking commands in Spanish. We thought, wow this guy has presence  We met him after the show and we were suprised that this big, scary looking guy is not only an actor but also a stand-up comedian who has a vast knowledge of movies and comic books. So we went to his gigs, argued about superman and Jessica Alba’s questionable filmography and we became fast friends. I don’t think anyone else could’ve played the part any better; he had the right mix of intimidation and meekness. He was perfect for the role.

SB: What has been the response to CINCO DE MAYO from the Mexican-American community?

PR: Mostly its been positive; everyone pretty much gets the joke. There have been a few grumblings about our intentions from both whites and Mexicans  My cousin Spencer, who plays the racist Dean Liberstein, had showed the trailer to a few female co-workers who were very pro Mexican and they did not like it at all. They didn’t even watch the movie- the trailer was enough for them! They thought we were making fun of El Maestro and Mexicans. I guess when you show the burning of a Mexican flag you have alot of explaining to do. Overall we’ve been pleased with the reaction of the audience.

SB: What’s coming up next for A&P Productions? Your latest film AFTER THE AFFAIR suggests that you have interests well beyond just genre film-making.

PR: Yeah, Angie and I are interested in all kinds of films; our tastes range from the French New Wave to Mexican narco films from the 80’s and everything in between, but horror is probably our least favorite genre. But I watched cheesy horror movies on video and t.v. when I was young so their influence will always stay with me. With AFTER THE AFFAIR we wanted to make something very, very different from CINCO DE MAYO. We wanted to emulate the work of Michaelanglo Antonioni, Robert Bresson and Jean Luc Godard. Our next project will be a true feature about a young couple who get mixed up in trafficking drugs and guns around California. Its going to be a Mexican rockabilly action/adventure movie done in a 1970’s style, like CHARLEY VARRICK or THE FRIENDS OF EDDIE COYLE. At the moment I’m calling it LA SOLDADERA.

SB:  For those interested in checking out CINDO DE MAYO, or keeping up on what A&P Productions is working on, what would be the best way to do so?

PR: If anyone wants to keep up with our latest projects we have a youtube channel, http://www.youtube.com/user/PaulR5150 with our past films on there and we have a face book page, http://www.facebook.com/aandpproductions !

PR: I’d really like to plug the awesome people who contributed their time and art to this movie. To me, it was their original art contributions that made the film so much better than it might’ve turned out. They actually made us “legit”.
At the end of the film, we have an “End Credits Rap Song”, that summarizes the entire movie you just watched like in TEENAGE MUTANT NINJA TURTLES or THE MONSTER SQUAD. It was written and performed by my old film school mate, Frankie Castro, please check out the song “The 5th of May” and his other tracks at http://soundcloud.com/crankiefastro/may-5th-that-song-from-the. The song is amazing and it was more than I could ever hope for. And we also had a very talented artist-friend of ours, Jackie Castano, paint a poster for the film which we used as the DVD cover art. We are so lucky to have had her paint our poster. She totally captured the exploitation feel that we were going for. She has an etsy account where you can checkout and purchase her awesome artwork here http://www.etsy.com/shop/artbyjackiec
Also thanks to Nick Carmona for the awesome spaghetti western guitar work!

SB: And, finally, do you have any advice for young or inexperienced film-makers who are looking to tackle their first feature?

PR: The only advice I can give to young filmmakers is to really explore cinema and your own self. Really think about how film has shaped you as a person, and why you like the things you like. Tap into your obsessions, convictions and fears. Respect the collaboration process, keep good contacts with people that help you. Be open to ideas, criticism and compliments from others as is can only make you better. Have an open mind, watch everything and love film with all your heart.