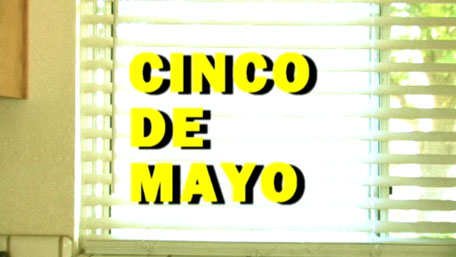 Paul Ragsdale’s CINCO DE MAYO deserves much better than to be lumped in with the increasing number of tributes to exploitation cinema that have been piling up since the release of 2007’s GRINDHOUSE. Certainly it revels in the cliches and tropes of 80s slasher cinema, and throws in the requisite fake grain and film damage for good measure,  but this is far from a retread of what genre fans have seen dozens of times before. Instead, Ragsdale has made the inspired choice to combine social drama with horror – as he puts it, to meld STAND AND DELIVER with FRIDAY THE 13th – and the final result is intelligent, conscientious and a cut above its low-budget brethren.

The Mexican-American El Maestro (Anthony Iava To’omata) teaches Chicano studies in a small Texas town, but finds his students resistant to learning about the incredible cultural heritage of his people – and of the town itself. When the disinterested principal unceremoniously fires him, El Maestro plans a protest, before a trip to a psychiatrist reveals that he’s suffering from “Aztec blood lust”. Facing close-mindedness and racism from the local townspeople, the teacher decides to teach them a lesson that they’ll never forget. 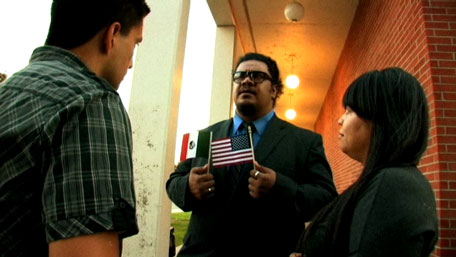 Even from that brief summary you can probably tell that there’s more going on here than in your average brain-dead slasher film. Ragsdale and Angie De Alba’s A&P Productions make films which celebrate and explore Mexican-American culture, and CINCE DE MAYO manages to provide enlightening references to the Chicano experience without it ever feeling shoe-horned into the plot. While El Maestro’s students make references to some of the cliches and stereotypes Mexican-American’s have to live with, Ragsdale is much more interested in approaching his occasionally messy material from a place of cultural pride. It’s a refreshing – and original – approach, and works quite well, despite (or, perhaps, because of) the brief, 55 minute running time.

But a respectable message doesn’t mean much if the film-making can’t quite match up. Thankfully, Ragsdale handles the material with confidence and a keen eye. His extensive experience as a cinematographer has obviously paid off, as the dramatic scenes rarely betray the low budget, while the stalk and slash bits rely more on tension than cheap scares or gore. He’s ably supported by a strong cast, particularly the unique looking Anthony Iava To’omata who brings a lot of stoicism and sympathy to his lead role, and his size brings a proper amount of menace when it’s called for later in the film.

You might be wondering at this point just what CINCO DE MAYO owes to 80s exploitation film-making, and the real answer is “not much”. While the stylized VHS-style logos at the beginning are fun, the film actually suffers from its tired attempt at showing tribute to films it only barely resembles. It can rest easily on its own merits, and these elements simply distract from what is a tight and engaging story as is. I could complain that most of the baddies are caricatures rather than fully realized antagonists, but there’s only so much you can do with 55 minutes.

A polished and original addition to the slasher movie oeuvre, CINCO DE MAYO manages to meld solid drama and tense horror effectively, while spotlighting a nationality that too often gets pushed to the sidelines in genre cinema. Paul Ragsdale’s passion for the subject matter is apparent in every frame, and he’s supported by strong performances and his own sturdy visual style. It doesn’t re-write the rule-book, but it tells a solid story stylishly, and never gets bogged down with messages. Looking forward to seeing what’s next from A&P Productions.