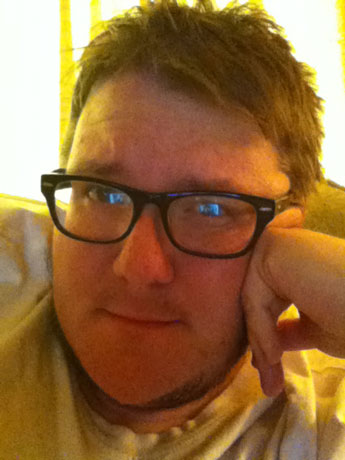 Sweetback (SB): Let’s begin as close to the beginning as possible. What’s the first film you remember really making an impact on you?

Ron Purtee (RP): GHOSTBUSTERS. There is a photo of me when I was really young, maybe 5 or 6, running around with my GHOSTBUSTERS shirt on like a walking advertisement for the film. I didn’t get most of the jokes but my mind was just blown by what I saw.

SB: How did you get into film-making? Were you making short films as a kid, or was it something you really embraced as you got older?

RP: Totally something I got into as I got older. Growing up we weren’t exactly brimming with cash so getting my hands on any of the cool new equipment for anything really was kind of difficult, and I always saw making as a huge thing. Big productions and the like. I still never had a Millennium Falcon. Probably could fix that now.

SB: You’ve dabbled in a lot of different media – from stand-up comedy to podcasting to vlogs. What about directing keeps bringing you back, and what about your personality pushes you to try all these different things?

RP: It may sound cliche but ever since I was little, I’ve always wanted to entertain. It’s in my blood, and I always think that if I am not doing something, I won’t do anything and it will kind of all fall by the wayside. The downside to that is it seems like I’m pushing projects away that don’t work out well, and I won’t lie, that’s happened to some things. But mainly its just me having too much time between certain projects and I end up doing something else that I eventually will have to drop because the other thing came back.

Directing just really allows me to get my visions out there, and it really is an amazing feeling getting folks together who share in that vision and want to see it come to reality.

SB: You’ve made a number of short films, but the ones that have received the most attention from critics have been part of the SOCIAL MEDIA MASSACRE series. Talk about how that idea initially developed, and what was the original concept?

RP: The original idea for the first short didn’t really change from its inception. It was always about a guy who was so lonely he would kill women and keep their bodies with them until they started to decay. It wasn’t till later that I was told it was basically “A Rose for Emily” by William Faulkner. The social media aspect of it came from all the time I used to spend on video streaming sites like Ustream and Stickam. I used to have a show on there and it really dawned on me that in society today, be it via Twitter, Facebook or Youtube, we have to get every aspect of our lives out there into the ether, and I am not any different in that regard.

I cast Charlie (Bussian) because I had worked with him on BECOMING UNDEAD and we both kind of had the same sick and disturbing vision for the final product. I had been friends with him for a little while and I had never known that he was just about as disturbed as I was. . So it all clicked.

SB: Each of the four films plays a little bit with perspective; the camera representing a webcam in three of the four films. Was the idea to make the viewers complicit in the acts of violence on display?

RP: Very much so. Especially in I’M STREAMING DEATH. I was bullied a lot in my life so that film really allowed me to be cathartic and let out a TON of frustration. I wanted the pain and the anguish that the killer was feeling to translate to the audience. In the other films I really wanted to audience to feel like this is something they are watching on their computer, and it’s actually happening and they have no control over it. Truly and totally helpless.

SB: Each of the pieces feature quite disturbed individuals, and from personal experience that’s a difficult quality to get out of an actor or actress. How did you go about casting the shorts, and how difficult was it to get appropriately unhinged performances?

RP: I wish I could say that it was a huge casting process and we went through hundreds of people before we found the right ones, but mainly, its my friends. Shaun (McGregor) and Charlie in particular gave the most disturbing performances. With Charlie I just really drove home the fact that he needs to do a huge transition in just a small amount of time, from a timid guy with borderline social problems. Shaun on the other hand just turned on a switch and this whole new person was there. It was really something I had never seen before and was SO amazed at what I got from him.

When I was writing TO SAY GOOD-BYE, I really had Valerie in mind the whole time. She really brought home the despair that the character was going through. Heather and Kelsey work together a lot and the chemistry between the two of them REALLY made I’M STREAMING DEATH shine.

SB: While A HOLLYWOOD ENDING and FROM THE HEART both have clear – if brief – storylines, both TO SAY GOOD-BYE and STREAMING DEATH are more like vignettes. Was that an intentional choice going into them?

RP: Not really. with TO SAY GOOD-BYE and I’M STREAMING DEATH I felt at the time that they were good stand alone stories and needed to be told as such. In retrospect I think a lot more could be said and I am totally keeping that in mind.

SB: What has been the most difficult thing about getting publicity for the SOCIAL MEDIA MASSACRE shorts? Is there an intention to eventually try packaging them together?

RP: A website once said that the SOCIAL MEDIA MASSACRE is what’s wrong with horror. I don’t see it as traditional horror. What Ti West has done, that is horror. Those films scare people. Mine tend to make people uncomfortable because they are seeing something that they don’t want to deal with. Something that could be next door. That being said, I think that getting folks to stand up and take notice is very difficult mainly because I think there are so many projects coming out and the look of the SOCIAL MEDIA MASSACRE is very very low budget and is very easily lumped in with other projects.

I am going to be putting out one long installment with all of the shorts in one and perhaps have some commentary to go along with it. Right now, there is no tentative date for that to come out.

SB: I know you’ve been working on making a follow-up to FROM THE HEART as a belated continuation of the series. What can you tell us about FROM THE WOMB?

RP: We wrapped last night and I am still taken back by the performances that I got. Robyn Bersie who plays Mother is amazing and I can’t say more about her without giving things away. Shaun McGregor, well that man continues to amaze me. His performance during the climax of the film was, in my eyes, award winning. I may be biased though. The film picks up around 9 months after FROM THE HEART ends and loose ends get tied up.

This is the first time the SOCIAL MEDIA MASSACRE really comes out from in front of the webcam and gets into the thick of it. It’s really up close and almost too personal. I hope people love it as much as we loved shooting it.

SB: What’s your plan for the future? Any other projects you’re looking to tackle, and is it in the cards to try your hand at a feature length project?

RP: I have plenty coming up. And yes feature length is in the cards. I am currently developing a script with my friend Joseph Brandt Dilworth that will really allow me to do something that is the slow burn kind of horror film that I am a huge fan of.

Im also in development on another project with Shaun McGregor that is more dark comedy than horror and that’s all I can say about that at this point.

And the big news is, and I’m breaking it here first, that The SOCIAL MEDIA MASSACRE is going to be a full on series. 22 minute long episode type scenario with an arching story line. The first season will have 6 episodes and it will focus on Angela from IM STREAMING DEATH and what brought her to the final confrontation we have already seen. Im writing a couple episodes, Joseph Brandt Dilworth is writing one and here is MORE breaking news for you, Tony Burgess, the author of the book PONTYPOOL CHANGES EVERYTHING and the film PONTYPOOL will be penning an episode of the first season. Jeremy L Morrison is coming on as a producer/writer/director for the series as well. He’s worked with Adam Rifkin on LOOK, Chillerama and a few other things. I am REALLY excited about all of these people coming on board. I’m going all out and playing the TV show runner with this. Looking for writers, directors, actors, the whole she-bang and trying to find funding. Come hell or high water, this series is going to come out and right now we are outlining season 1. I won’t try and sugar coat it. I’m trying to find an agent, or some one that shares this vision and can help me bring it out on a larger platform. But, we will see where the balls roll as time goes on. 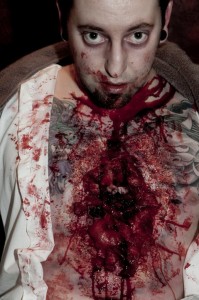 SB: If someone wants to keep up on the progress of FROM THE WOMB, your future projects, or simply want to check out some of your past work, what’s the best way to do so?

SB: And finally, what advice do you have for young, low-budget film-makers who are trying to get their work out there?

RP: Don’t fall victim to your own self doubt. Don’t think just because you don’t have a fancy DSLR camera and a huge Mac set up to edit things that you are any better or worse than those other people that do have them. Get a camera. Shoot something and get it out there. Embrace social media. It’s your friend. Don’t let negative reviews get you down. Chin up.

Believe it or not, I inadvertently owe my whole career to Adam Green. I was very unsure of myself and I was watching a show called GEEKWEEK Live hosted by Jeff Katz. Adam was a guest and I asked in the chat room if I could make a film with a Flip cam and Windows Movie Maker and his response will live with me forever, “Just make a movie”. So, long story short, that is my advice. Just make a movie. And thank you Adam.