MY FATHER DIE opens in silvery black and white, as a couple of Southern boys — you could indelicately call them hicks — drift down the Mississippi, hunting alligators and talking girls. The elder of the two, Chester, is a strutting braggadocious rascal in a shaggy wolfskin headdress, and he’s teaching the younger one, his brother Asher, how to have sex. Their on their way to visit Nana, a neighbor girl who has agreed to be Asher’s introduction to manhood. He never gets the chance. Before he can even have the chance to consummate anything, in barges their father Ivan, a growling bruiser of a biker who doesn’t even let family claim what he believes his his — and the underage Nana is his. Violence erupts, leaving Chester dead and Asher permanently deaf-mute.

A Nick Cave murder ballad come to grim, bloody life, MY FATHER DIE is a swampland-Gothic noir of righteous, punishing vengeance. Bracingly ill-tempered and viciously compelling, it’s as punishing and hard to take as a shot of pure backwoods moonshine, and it will leave you reeling in a stupor just as much.

BLOOD SIMPLE and NIGHT OF THE HUNTER sozzled on hillbilly hooch, it brings Old Testament Biblical wraith onto a blood-soaked tale of vengeance. When the adult Asher (Joe Anderson) discovers that Ivan has been released from jail, he sets out on a quest of pre-emptive bloodshed, seeking to not only enact revenge for his brother’s death but to prevent Ivan from doing the inevitable and seeking out Nana. And while he demonstrates that the ability to project brutal and unflinching violence unto others is a genetic trait in his family, he makes the mistake of not making sure Ivan is truly dead, unleashing a torrent of retributive violence which will spare no one in its wake.

Ivan, as played by British ex-boxer Gary Stretch, looks like a sixth-string SONS OF ANARCHY in his sleeveless leather biker vest, but the movie treats him like a slasher villain — and rightly so. While the movie is not quite a horror film, it veers close to that direction often and it treats Ivan as the fearsome Terminator-esque Angel of Death he is. Whether its a nude and blood-soaked Ivan roaring his way out from underneath a bed or gunning the engine on his motorcycle — the metallic steed of this modern day warrior of Hell — he is presented as an iconic figure of ruthless, merciless malevolence, an inhuman monster with a soul of pure, rotgut blackness. Taciturn in his unholiness, he is mesmerizing.

The movie matches his gutpunch hostility with brutish candor and a purely cinematic stylishness.  This is not a film that plays nice. It’s vile and vicious, a catalogue of atrocity committed upon the flesh, an indifferent God looking down. It veers towards the uncomfortably incorrect at times, misogynist and homophobic rather than merely exploitative, but it’s also ultimately part of the film’s misanthropic worldview where no one is above sin and ugliness. It’s just what your sin and ugliness stands for that separates you from the hellbeast ferocity of an Ivan or the well-meaning proactivity of Asher. 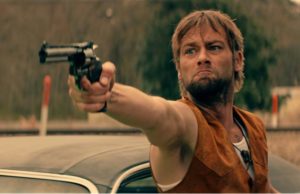 The film is the directorial debut of Sean Brosnan — yes, Pierce’s son — and he shows a flair and assuredness that reps a real talent. The movie’s obvious low budget rears its head at times — in the sometimes flat affect of the digital cinematography and a car chase/shootout sequence that is both too ambitious for its budget (and a little too generically “action-thriller-y” for the sustained tone of the rest of the film) — but it also doesn’t fatally kill the film. In fact, Brosnan’s talents belie the modest means thanks to a smooth, eclectic stylishness that embraces the films dirtiness without falling into a bland, rustic grunginess. It makes well-worn material feel wholly unique.

MY FATHER DIE is an uncompromising rough and tumble B movie, a film as muscular and pitiless as its villain. But great careers have been borne from similar material, and in its own lo-fi way, the movie is masterpiece of bilious trash disreputability showcasing a talent with  along career ahead of him.