Homeopathic remedies and healthy sounding buzzwords are all the rage now, a shift towards diet and health consciousness, physically and spiritually, that seeks any and every answer to disconnect our inner and outer selves from the polluting ravages of modern civilized society in order to return to a world of inner purity. Juice cleanses, natural diets and cheery New Age speak are the instant gratification purgative road to enlightenment. Given the focus on the body as a rotten vessel of spiritual garbage that most modern holistic medicine espouses, it almost makes one wonder what someone like David Croneberg would have done with such material in his heydey of gloopy and pungent body horror squirminess.

Someone has imagined what that would look like, and the answer? David Cronenberg’s GREMLINS.

That’s the persistent thought that went through my mind while watching Bobby Miller’s pleasantly weird debut feature THE MASTER CLEANSE, in which a New Age-y spa treatment gives birth to a gaggle of cutesy muppet-monsters straight out of a late ‘80s genre film. It’s not quite an accurate statement. It lacks the grossness and perversity of Cronenberg’s work, and the anarchic rebellion of that Amblin classic, though, on the other hand, it does possess that metaphorical smarts of the former and the heart-warming lovability of the latter.

A more sitcomish interpretation then either of those inspirations, THE MASTER CLEANSE stars sitcom veteran Johnny Galecki (ROSEANNE, THE BIG BANG THEORY) as Paul, a sad sack city dweller unable to come to terms with the failure of his start-up company and the dissolution of his last long term relationship. Directionless, he’s a sure mark for a tv ad for letsgetpure.com, an assemblage of New Age-y gobbledygook promising to cleanse and purify lost and troubled souls. 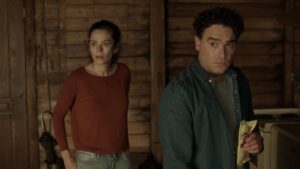 It turns out that Let’s Get Pure is the latest brainchild of Tony Robbins-ish self-help guru Ken Roberts (Oliver Platt), a three day woodland retreat where Paul and the three others chosen to participate — stand-offish actress Maggie (Anna Friel) and troubled, bickering couple Eric (Kyle Gallner) and Laurie (Diana Bang) — are asked to go through a fasting ritual where the only thing they are allowed to consume is four jars of colorful, foul-tasting liquid specifically brewed to each person’s needs. The liquid causes each person to grow violently ill, which turns out to be, unbeknownst to them, a strange birthing ritual: out of their vomit grows a amphibioid creature that looks like some sort of cross between a cat, a frog and an unholy Jim Henson slug.

The creatures are manifestations of each person’s inner angst, and while they are adorably chirping and wide-eyed practical FX creations, they are also cheerfully heavy-handed metaphors for the turmoil we carry within us on a daily basis. The Let’s Get Pure method of expunging the darkness that inhabits us is to grow it as a monster and then ultimately kill it — a literal destruction of our inner demons. But as Paul and Maggie become attached to the cute little buggers, and he warms his way into her reserved heart, they begin to question Roberts’s methodology and beliefs. 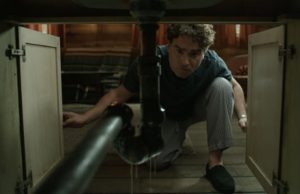 THE MASTER CLEANSE is a fanciful and smart genre comedy that never quite catches fire. It’s a pleasant film, and one that ends on a note of honesty even as it seems to negate any kind of third act or tying up of loose ends. But it never feels as though Miller is going to bring it out of a low simmer. It’s amiable and amusing, a little weird, and you come to care about Galecki’s optimistic but emotionally crushed protagonist and Friel’s wary and cautious love interest. It’s funny and sweet, but there’s a sense that, for all of Miller’s metaphorical playfulness, it isn’t adding up to much.

As the movie goes along, you begin to realize that — outside of premise and the performances — there isn’t much to the movie. It never builds a full head of steam, so it doesn’t feel like there are any stakes involved; even as individual incidents seem to be gathering towards an apex point of intensity, the film retreats into its shell of reservedness. The movie ends abruptly, and even as you applaud its resistance to genre cliche, there’s a dawning realization it doesn’t add up to much, which undercuts much of Miller’s thematic intention. A movie doesn’t — and shouldn’t need to — adhere to standards and tropes to succeed, but it should build to some sort of catharsis. While THE MASTER CLEANSE may be emotionally honest to its characters, it never rises out of being an entertaining, but slightly wan, trifle.