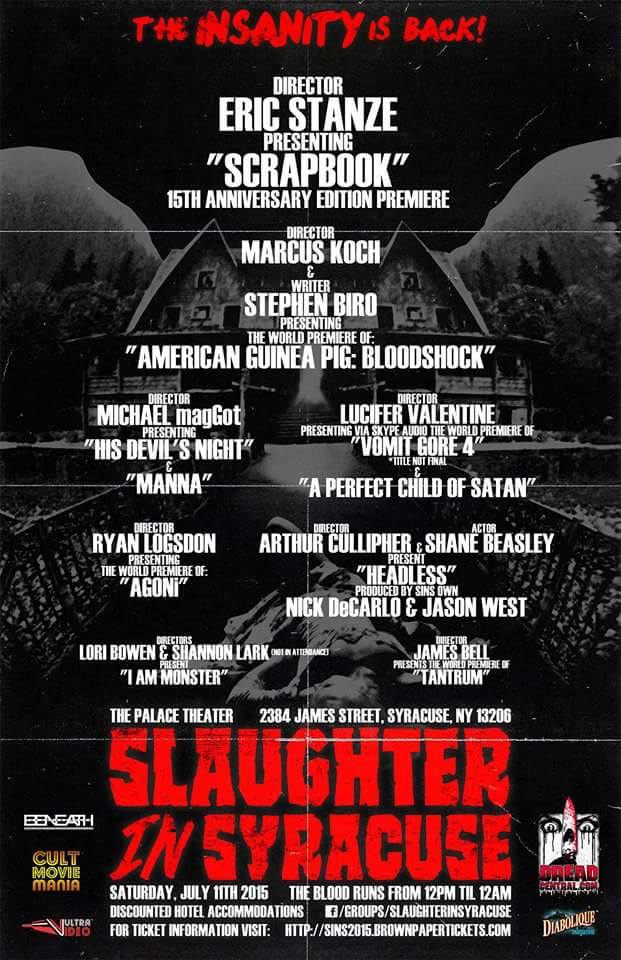 From July 10th-12th, 2015, Syracuse, NY is going to be the home to some of the most vile, original, and exciting independent horror films and filmmakers in the United States. The brainchild of Vultra Video‘s Jason West and Beneath The Underground‘s Nick DeCarlo, SLAUGHTER IN SYRACUSE (aka SINS) is a three-day Independent Underground Horror extravaganza featuring such microbudget luminaries as director Eric Stanze, FX master and director Marcus Koch, Unearthed Films’ Stephen Biro, and many more, and looks to be a smörgåsbord of delights for fans of low-budget horror. Jason and Nick took some time from organizing the event to chat with Daily Grindhouse’s Doug Tilley about how the idea for the festival developed, what makes it different from traditional horror conventions, and what fans should expect. 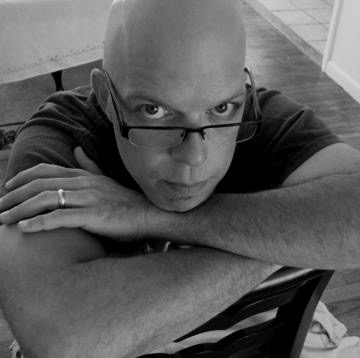 First things first. You both have experience in marketing and have strong relationships with independent filmmakers, but how did you both get together, and when did the idea for the creation of a horror festival first come up?

Nick DeCarlo: I was a fan of Jason’s VHS releases with his company Vultra Video. As Beneath the Underground was growing Jason approached me about co-branding his Vultra releases with the BTU logo and he mentioned his Syracuse Sci-Fi/Horror Garage Sale. Having strong relationships with many independent horror filmmakers it made sense to expand the event to include a film festival and everything has grown organically from there.

Jason West: I first started talking to Nick when he had the fundraiser up for Rodleen Getsic. We started talking more and more about a common goal that we had. We wanted to both help people in the underground try to get the recognition they deserved. With me running a distro label and already having great relationships with many directors I figured it was due time to start a fest that focused on the people we have come to help support so much. Who better to partner with then a guy who runs a strictly underground group on Facebook!

While genre festivals — and horror festivals in particular — have grown massively in the past decade, your event focuses heavily on filmmakers — like Eric Stanze & Jason Koch — who tend to work with lower budgets. What differentiates SLAUGHTER IN SYRACUSE from your average horror convention?

ND: Our convention intentionally creates a very dignified screening of films that otherwise might be reserved to back-room screenings or seemingly hidden away at larger conventions. We want these films and filmmakers to be the highlight of a festival without the distraction of mainstream guests. Also using the amazing careers of such independent underground icons like Fred Vogel or Eric Stanze to stand side-by-side with new filmmakers like Matthew Garrett or Ryan Vincent Logsdon is a unique way of the older guard ushering in the new.

JW: I like to think of this as more of a friends and family event. Everyone who comes out to SINS knows each other, you are very close and intimate with the guest, you have plenty of time to talk to them instead of having to wait hours to get an autograph only to be pushed through the line for the next person. All these people are so genuine and love the exact same stuff we do. It really cant get anymore close-knit then this. 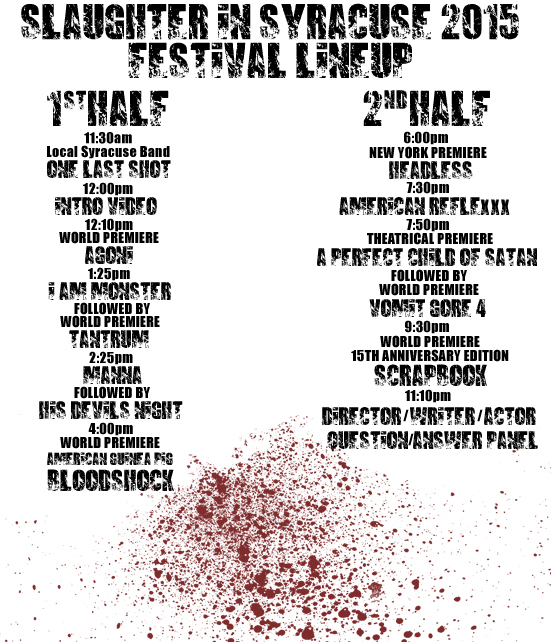 How much work goes into planning a three-day event of this magnitude? Since you’ve done it before, has it been significantly easier this go around? Or does each year come with unique challenges?

ND: Each year has been unique. Mostly I have dealt with contacting all of the filmmakers and crafting the lineup. Jason, living in Syracuse deals with the local vendors and has all of the experience with the convention end of the program. Each detail is gone over and over until we are both satisfied that we are offering the most creative and complete lineup each year. Nothing about organizing an event that has 3 separate sectors is easy but with our love and passion for indie horror we are more than ready for any situation that presents itself.

JW: Well for me I think it was been much smoother this year then last year, we have developed new contracts and have a feel for this since last year. I can’t take much credit because I feel like this fest would be nowhere without Nick. I was in the hospital for a month and a half at the beginning of the year and he took over a lot. So the majority of credit goes to him for stepping up his game.

For horror fans who maybe are not as familiar with independent productions, what would you like them to take away from SLAUGHTER IN SYRACUSE?

ND: First and foremost we would like every fan and filmmaker to walk away feeling like they are shared a unique experience and a part of indie horror history. A relaxed family like atmosphere is essential so we stress to our guests to interact, there is nothing more pure in the independent scene than the love fans and filmmakers share with each other and with each other knowing how much they respect and need each other.

JW: If nothing more then the fact that we are all a huge family and we all have a common goal. I’d hope that people see our love and passion for what we are doing and see the amount of time that it takes to go into putting one of these festivals on. It’s all about loving your community and seeing how great the people within are.

What were your personal highlights from the 2014 version of the event? Were there any problems you’re looking to address for this year’s event?

ND: The 1st annual SinS event was mind blowing. Everything seemed to click right into place. Although the attendance was somewhat low compared to a mainstream event it added to the bonding of each person there. The only issue that arose was a Director needing to back out 2 days prior to the event and luckily we had another who was already attending the event as a guest who was more than eager to fill in. Personally what I learned is to always have backup plans in the case any individual cannot appear or needs to drop from the event for any myriad of reasons.

JW: The pure fact that I was able to finally do something that I have wanted to do for years was my highlight. Ive been supporting these guys forever and was finally able to show them how much they meant to me. Everyone was talking about last years event for months and months. It’s still being brought up to this day.

And, on the flipside of that, what are you most looking forward to regarding this year’s event? Or are you both so busy during the three days that it’s hard to look forward to anything?

ND: Everything and every moment. I truly believe we have created what will be remembered as thee most extreme lineup of films ever to be presented in a theatrical festival. We have so many World Premieres and such a hard hitting lineup that the hardest part has been waiting.

JW: I’m the kinda guy who doesn’t calm down till after something is over (laughs). I mean i guess the fact that we have 4 world premieres is huge for any event so that rules.It’s very awesome to see how much this fest has grown since last year and I’m ecstatic to be able to be a part of history!

I know both of you are extremely busy outside the work that goes into the festival. What are you both currently working on, and what should we be looking forward to in the future?

ND: I have been cultivating a film festival which will be in the New Jersey area for 2016. The event will be similar to SinS but at the same time VERY different. The venue is modern, the lineup will be unique unto itself, but it will have one common denominator – the same love and passion will be the main ingredient. Outside of that I am in talks to direct an original film I am writing with another friend and plan to take the Beneath The Underground website to new levels. That is vague, but it is all I can really say for now. All of this while doing the most important job of being a Father, Husband, and focusing on my day job.

JW: Well right after Slaughter is over (literally the day after) is when we start production on THE BLACK SECT. Marcus will be up here premiering the new AMERICAN GUINEA PIG film and then will stick around for about a week to do all the effects for our film. Very excited to hopefully join the ranks of some of these people I’ve grown up to love. Also Vultra Video is always busy with a new release or some sort of campaign. I also run a horror and sci-fi garage sale twice a year so right when this ends I will be planning an event for October!. Never a dull moment here…

For those interested in getting tickets for the event, or those looking to follow updates, what’s the best way to do so?

ND: SlaughterInSyracuse.com is the best place for all information. There are also various Facebook groups we post event details too as they arise.

JW: As Nick stated, the website is the best source. If you would like a direct link for tickets it’s http://www.brownpapertickets.com/event/1188549

Anything else to plug?

ND: I would just like to personally thank every fan of indie film and each indie filmmaker that has given this event and Beneath The Underground attention. It is very humbling, always noticed, and very much respected and appreciated

JW: Well if I can Id like to ask people to check out The Black Sect campaign on indiegogo. Also, check out some of the awesome VHS releases that Vultra Video is doing over at www.vultravideo.com. Really cant thank everyone enough for the support they have shown me over the years. This has all been a life long dream and an amazing journey. 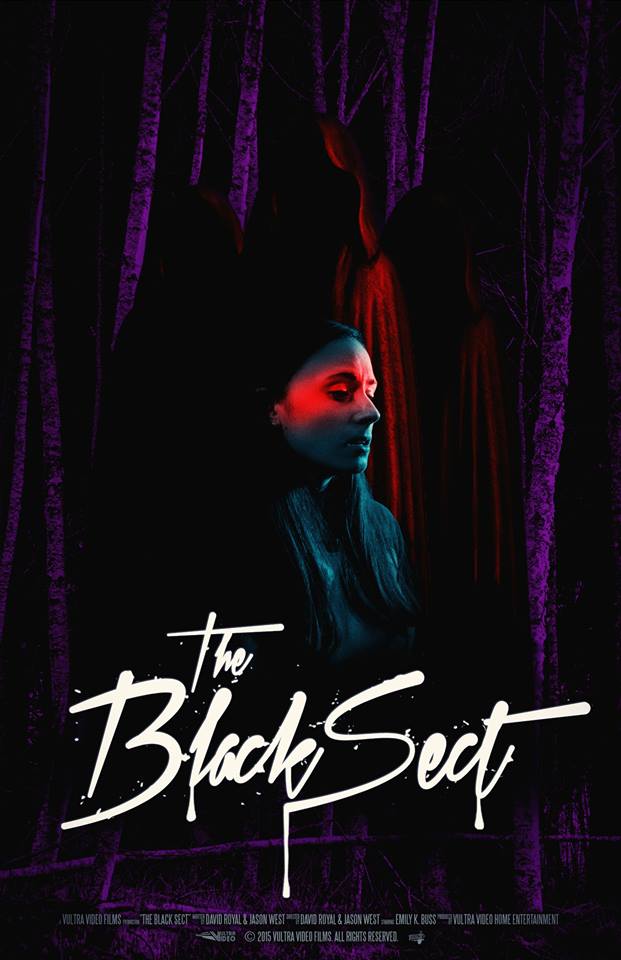 Finally, since you’re both deeply involved in the independent horror scene, who are some directors that fans should be on the lookout for over the next few years?

ND: Jason West and David Royal will be entering the arena soon and I look forward to seeing what they do. I am a fan of drama-driven horror so I will closely be watching the careers of Matthew Garret (MORRIS COUNTY), Joe Stauffer (PIECES OF TALENT), and Scott Schirmer (FOUND.) who are all amazingly talented filmmakers.