Vinegar Syndrome has made a name for themselves as one of the best independent home video labels since their inception by releasing films that have been difficult to track down or that have previously only existed in subpar formats or bad transfers. They have been wisely selective about which films to release on DVD and which to release on Blu-ray, still a much more expensive format years after its introduction. This Spring, Vinegar Syndrome announced their first limited-edition DVD/Blu-ray combo pack, testing the market waters for a very niche double feature: two films by Eric Jeffrey Haims, 1971’s infamous proto-slasher THE JEKYLL AND HYDE PORTFOLIO and Haims’ 1972 porno comedy A CLOCKWORK BLUE. This set, limited to 1000 copies, was sold through their online shop (and DiabolikDVD.com) and will be available at film conventions before a standard DVD version will be released in May. This limited edition version raises an interesting question: Are these films worth the effort and expense of the Blu-ray format? 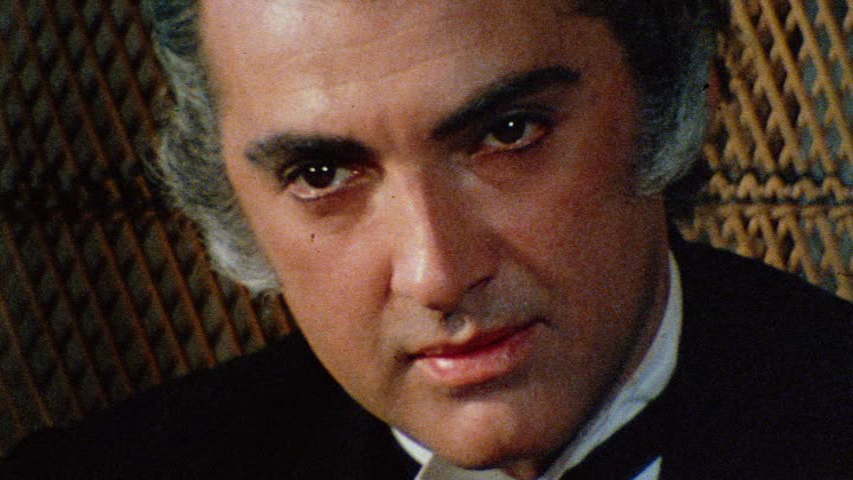 THE JEKYLL AND HYDE PORTFOLIO is of particular interest to fans of VHS-era horror, as it was released on VHS in a very limited run and therefore highly sought after by tape collectors. Additionally, the film’s appearance in Stephen Thrower’s exploitation bible Nightmare USA helped stoke interest in the film among hardcore genre fans. For some time, the film was difficult to find even on dedicated torrent sites, where a viewer would be lucky to get a smeary, chopped square frame transferred from one of those old tapes. To say that this Vinegar Syndrome release is a welcome upgrade—scanned in 2k from the 35mm blow-up negative—is to be guilty of exceptional understatement, even if this new transfer has a good amount of dirt, noise and dense grain from originally being shot on 16mm. As for the film itself, well… not all obscurities can be diamonds in the rough.

And THE JEKYLL AND HYDE PORTFOLIO falls pretty squarely into the category of “rough.” After a scene shows a woman in a tree swing being murdered with a pitchfork in slow motion (well, less “shown” than “implied”), Detective John Kinkaid (Donn Greer) begins the voiceover narration that will occasionally punctuate the film by talking about the story of Dr. Jekyll and Mr. Hyde while blood flows over a collage of drawings of famous historical murderers like “Rasputin, the Mad Monk.” This voiceover eventually transitions into the story of murders taking place at the Florence Nightingale Institute, a nursing school run by the obviously insane Dr. Cabala (Sebastian Brook). Kinkaid has been called to investigate the pre-credits pitchfork murder, and finds no shortage of suspects: Lip-smacking, wild-eyed Cabala, repressed headmistress Hettie (Casey Larrain), randy handyman Moss (Hump Hardy), dashing but dissection-obsessed Dr. Mark Carter (John Terry), Carter’s wildly jealous fiancée Dr. Leticia Boges (Mady Maguire), and pretty much everybody else except Carter’s “virginal” mistress June (porn star Rene Bond, the biggest name in the cast). 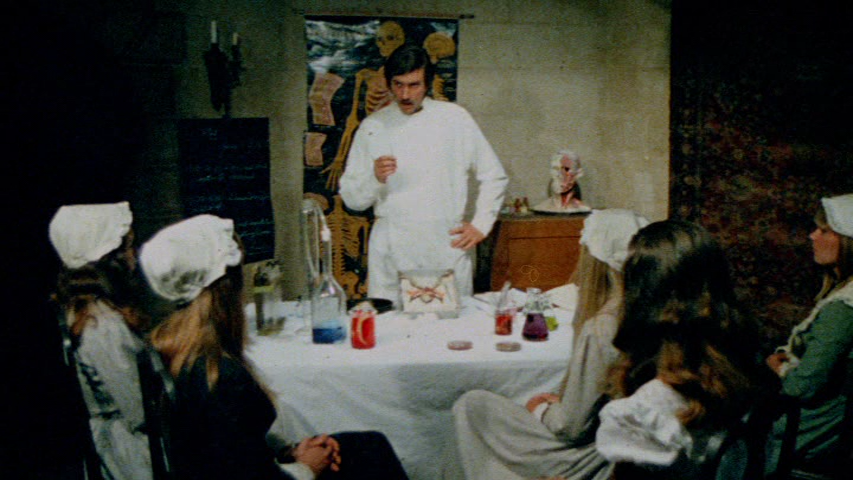 In Nightmare USA, Stephen Thrower refers to THE JEKYLL AND HYDE PORTFOLIO as “the closest thing to an Andy Milligan film made by a heterosexual.” That’s about as apt a description of the level of filmmaking style and technique on display here as any. The film is loaded down with characters all wearing period costumes and having lengthy discussions about the goings-on behind the scenes at the institute. The editing is frequently disorienting, probably at least somewhat deliberately, to help sell the murder scenes. Blood is bright red paint, cheap Hammer knockoff style. Lengthy close-ups of live frog dissection help pad out the “horror” element of the film. Unfortunately, two major things that make Milligan’s films so compelling are sorely missed in THE JEKYLL AND HYDE PORTFOLIO: Milligan’s dedicated cast and his crazed, overheated dialogue. Watching the actors tear through paragraphs of dialogue in BLOOD as though a gun was pointed at their heads (entirely possible!) is a much more enjoyable experience than watching everyone slog through their dull speeches in PORTFOLIO. Still, for fans of American 1970s regional horror filmmaking, this is going to be required viewing.

The same can certainly not be said for A CLOCKWORK BLUE, which is basically a nudie cutie with occasional hardcore sex thrown in. That means a lot of sub-vaudeville race and sex humor, naked people, and more slide whistles and wacky horns than you can probably take in one sitting. Stop me if you’ve heard this one before: A black guy named Blackie (yes, that’s his name, and the actor is not credited, although whether this was an oversight of the production or by the actor’s request is unknown; both seem equally possible) and a Jew (Joe E. Tata) enter Heaven, which apparently smells like weed. God grants them each one wish: Blackie wishes for a million dollars, while the Jew gets a nice pocket watch. Cue opening credits, then a return to Blackie sitting at a table where a watermelon with a porthole in the side is connected to a pair of TV antenna “rabbit ears.” Blackie is watching as a nerdy janitor named Homer (also Joe E. Tata) stumbles upon the Jew’s watch, and each time he pushes a button on the watch Homer is transported to another time period to watch wacky hijinks and/or people having sex. Blackie will sometimes offer up humorous commentary. The guys at the local Elks’ lodge must have been losing it when this thing unspooled on their rickety old 16mm projector. 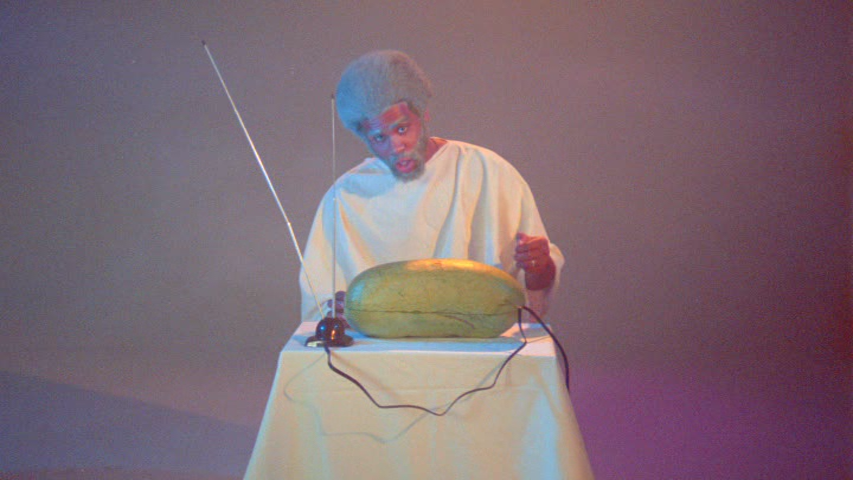 We find out that George Washington and Paul Revere liked to visit a brothel right next to a British stronghold, Helen of Troy has the deep voice of a man (and her lover Paris speaks in the voice of a young woman), Indians regularly had sex in the middle of Puritan villages to taunt the guys in the stocks, Marie Antoinette and Madame Dubarry were friends with benefits, and there were no jokes at all in Viking times even though somebody was wearing a bear suit at one point. There’s more, but it all sort of blurs together after a while, and at 81 minutes this is much too long for what it is. 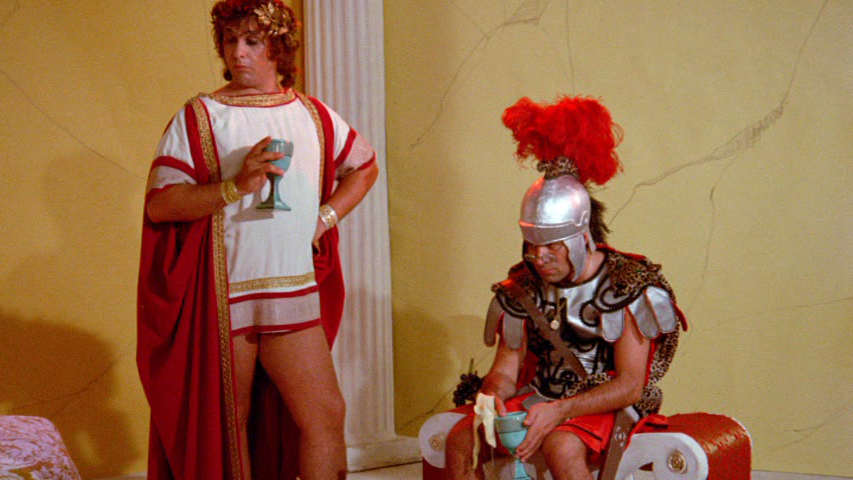 In the end, Vinegar Syndrome was probably wise to hedge their bets by releasing this as a limited edition. While more horror fans will be interested in seeing THE JEKYLL AND HYDE PORTFOLIO now that it is finally widely available, the number of people who would feel compelled to own it on Blu-ray is probably comparatively small. The same applies to A CLOCKWORK BLUE for serious fans of 1970s adult film: the hardcore niche will want the Blu-ray transfer of the X-rated version, but most audiences will be fine with the R-rated cut on DVD. If you’re one of those hardcore fans, you should probably act fast and check out DiabolikDVD.com soon (Vinegar Syndrome is sold out of this release on their site) or visit one of the film conventions where Vinegar Syndrome will be selling the title before it starts commanding THE JEKYLL AND HYDE PORTFOLIO VHS levels of cash on Ebay!