This year sees the release of GUN MEDIA‘s long awaited FRIDAY THE 13th: THE GAME and horror fans everywhere can’t wait to get their hands on it, this writer included. While the one versus all concept was slickly executed in last year’s DEAD BY DAYLIGHT, the fact that GUN MEDIA‘s take on it will be a love letter to fans of the long-running horror franchise creates an irresistible combination. The excitement of rabid slasher fans finally getting a full-fledged game based on FRIDAY THE 13th (Jason’s appearance as a playable fighter in MORTAL KOMBAT X was more of a cameo, has sparked this writer’s interest in the much maligned but memorable NES game published by retro gaming’s punching bag developer LJN and developed by Atlus, though LJN is typically the main reason seen for the game’s poor quality. While from a gameplay standpoint FRIDAY THE 13th has incredibly painful flaws the presentation of the game deserves an ample amount of recognition for managing to create an NES game that to this day still has an eerie tone to it despite the near constant beating it takes from hardcore gaming experts on the internet. 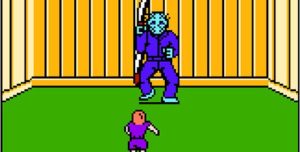 This is a game remembered for its tone and its ambition rather than it’s game play, with good reason too. The game is genuinely creepy despite having the limitations of the technology it was made for. The opening of the game sets the tone perfectly. A black screen with a well rendered drawing of Jason’s iconic mask laying on the ground, suddenly a knife flies in off-camera and in a nod to THE FINAL CHAPTER‘s box art, lodges itself into it’s eye followed by the screen flashing and an abrupt musical cue blasts out of your speakers.. The music is one of those aspects that gets overlooked, unfairly so because despite it’s limited tracks it has fantastic creepy music. The standout being the music that plays when you are exploring the cabins that litter the game world. Even to this day the cabin interior parts of the game maintain a certain unnerving quality to them due in large part to the tune. Oh and the fact that Jason is possibly lurking about waiting to come at you like a hurricane of undead rage along with a very fitting and frantic 8-bit slasher theme.

Speaking of which, it’s interesting to see how this particular version of Jason has gone on to become a genuine part of his history to many. Shirts with his purple and blue palette are a common sight and there have been numerous figures, most notably by NECA, paying tribute to what was seen as a silly joke and a sign of LJN’s incompetence of how to make a game… when really it was probably just color choices and or limitations of the tech the game was built on. Either way NES Jason has earned his place in F13th history, and I would be surprised if with all the unlockable content slated to be in Gun Media’s new game if Jason’s NES duds didn’t make it in there somehow. Of course one of the biggest thing’s to live on from the game besides Jason himself was the brutal game over screen that greeted you when you failed to stop him. 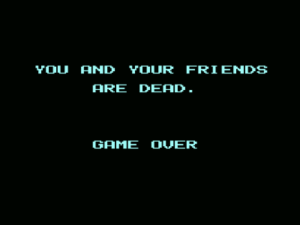 To this day, FRIDAY THE 13TH remains an odd beast in the vast NES library. It’s regarded as one of the worst games on the console and in some cases of all time. Yet despite that it has this seemingly undying quality much like the man behind the mask himself. Odds are if you are talking to someone who played a lot of games growing up on the NES they have some memories of this one and I think that speaks to the legacy of the game. In most cases, bringing up FRIDAY THE 13TH will cause someone to break out in Jason’s menacing shuffling he would perform when you engaged him in battle. While this writer doesn’t think the game is going to change to an underrated classic overnight, if at all, it does deserve a second look without the brutal lashing a majority of game reviewers love to give it.