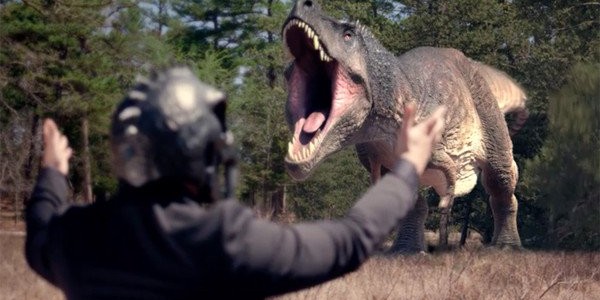 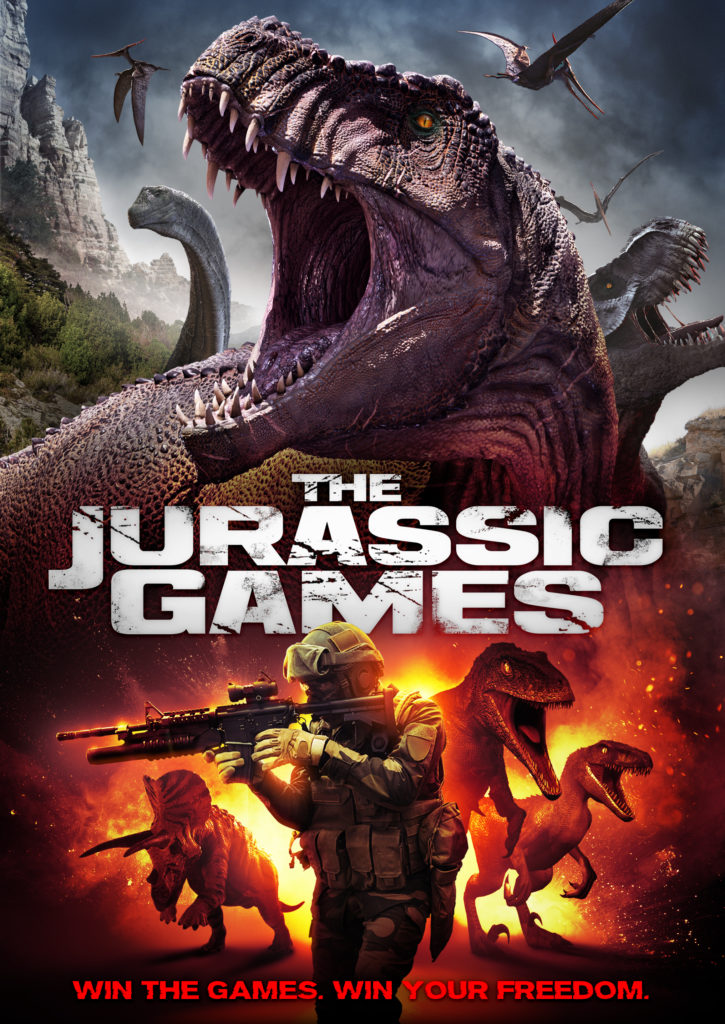 The “death game” motif has long been a staple of genre media, from the publication of Richard Connell’s The Most Dangerous Game in 1924 to the recent success of the HUNGER GAMES books and films. It’s a simple idea, one that allows writers and filmmakers to delve into basic human survival instincts and the lengths one would go to in order to preserve one’s own life, while still having loads of exciting action. 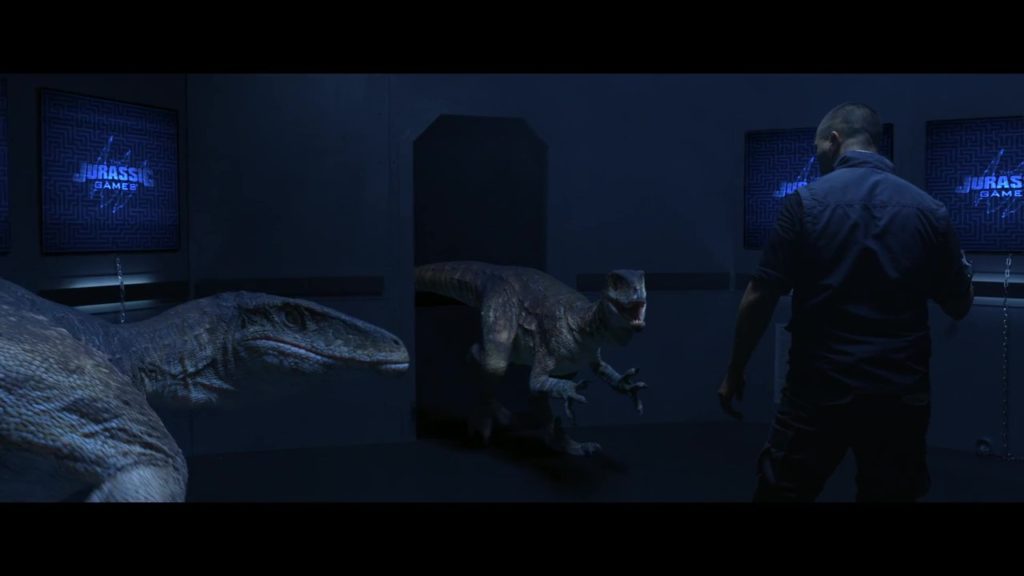 Through the years, there have been endless permutations of the theme, but they can essentially be segregated into four categories, depending on two traits. The first is the primary antagonistic force of the game involved – whether the players of the “death game” are meant to kill one another (under punishment of death for their reluctance, rewarded with some goal for their survival, or a combination of the two) or whether the players are being pursued by an individual or team and hunted for sport, as in Connell’s classic. The players could also be pursued by a non-sentient threat controlled by an entity that’s either unseen or does not directly interact with the players, where the players go through a series of games or tasks that kill them off, a relatively new conceit popularized by the CUBE and SAW films. (Films about televised sports that end in death are, ultimately, more sport than “death game,” so I consider films like ROLLERBALL or fight-to-death-death-via-bracketing competitions like MORTAL KOMBAT different entities entirely.  Still good, though.) 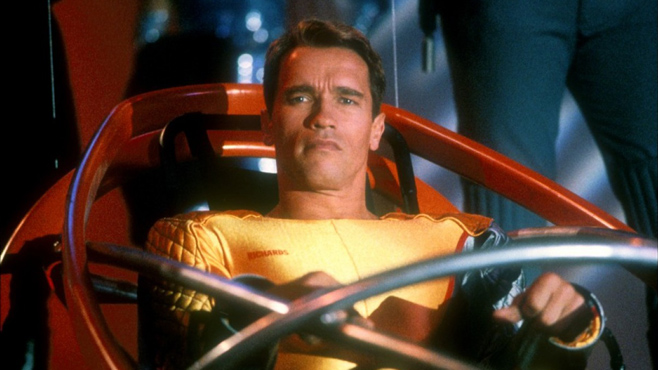 The second trait is the intended audience for the game itself. In “death games” with a public audience, the game is presented with a degree of flair and panache intended to entertain above all costs. These tales tend to be more satirical in nature, often using the conceit to reflect media audiences and even the audience of the films themselves. They also tend to be a bit more “fun” than “death games” geared for an exclusive audience, in which the games are for a minimal audience of hunters (and occasionally well-financed spectators) and not for public consumption. The former tends to take place in the future (as despite ominous warnings, reality television never really got into snuff territory) while the latter tends to take place in the present.

All of these traits, of course, are more guidelines than rules, and there are plenty of exceptions. In addition, the antagonistic forces often overlap slightly – you’ll often find competitors being pursued killing off each other for various reasons, and players that are instructed to kill each other off are sometimes given a little, deadly push by other forces in order to make the “game” (or story) more interesting.

(You can clip and save this page! Go ahead and bring up the fact that SLASHERS is specifically a “Being Hunted/Public Audience Death Game” film when it comes up in conversation! I get a dime every time this is referenced in an academic text.)

The one thing all of these subgenres have in common — other than a reliable body count — is that I’ll watch any and all of them. Sure, this means delving though unrepentant sleaze like THE SUCKERS and unremarkable stuff like HOUSE OF 9, but even the worst of these films has some sort of entertainment value to me. It’s why I gleefully took the reigns on reviewing THE HUMAN RACE a few years ago, and why I jumped at the chance to point my eyeballs at THE JURASSIC GAMES, the new film directed and co-written by Ryan Bellgardt, who shared similar duties on ARMY OF FRANKENSTEINS.

JURASSIC GAMES, as you might surmise from the title, is a mixture of two hot franchises-of-the-moment, MANNEQUIN and “CROCODILE” DUNDEE.  Wait. [Checks notes.] Sorry, it’s a mixture of JURASSIC PARK and THE HUNGER GAMES, utilizing the latter’s “death game” central conceit and adding the former’s… well, dinosaurs. It’s an inspired premise, in the sense that it’s a “death game” with dinosaurs, and that’s a good enough marketing gimmick to be at least intriguing by concept alone.

The plot itself can probably be guessed by this point, with only specifics needing to be filled in. Ten prisoners on death row are chosen to be part of an annually-televised game (called, natch, THE JURASSIC GAMES) in which they’re hooked up to a virtual-reality system and then forced to compete until only one survivor remains. Of course, if you die in the game, you’re killed in real life as well. Also, there are dinosaurs. 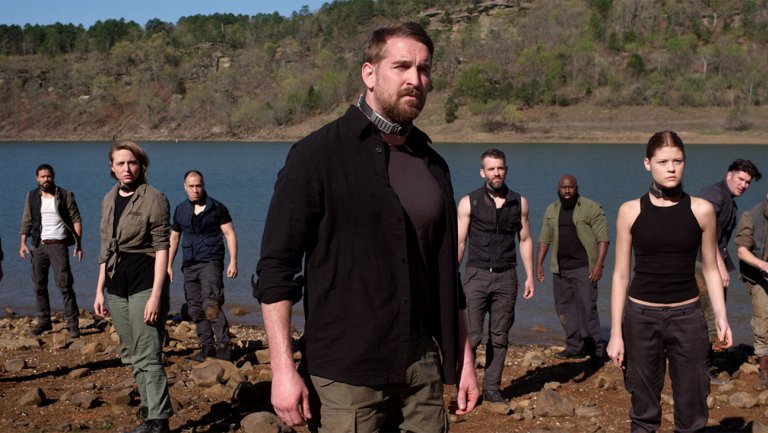 You might have noticed in the graph above that there are no entries for the Sub-Games/Public Audience space, and I’d imagine the reason behind that is that doing a reality show/entertainment franchise around a bunch of people figuring out how puzzles work would probably be pretty dull. The odd thing is that JURASSIC GAMES sort of fits in this area — as while the contestants are being pursued by dinosaurs and occasionally kill each other, the dinosaurs themselves are computer-generated and are specific to each “zone” within the game, so every twenty minutes, you get a new setting and a new batch of dinosaurs, rather than having one or a few consistent predators. There are also mazes and mind games and puzzles to solve! So right off the bat, THE JURASSIC GAMES hits on something unique beyond just throwing two high-profile concepts together in a blender.

It’s in the execution of these concepts that JURASSIC GAMES starts to flounder. The ten contestants aren’t a particularly varied bunch, and outside of the woman, they’re distinguishable mostly due to their facial hair length and rarely developed beyond the most superficial means. (One character is even given an introduction on the show after he’s killed off, the type of messy editing that would cause any reality show to go off the air within the first month.) The ostensible hero, a father convicted of killing his wife and protesting his innocence, is affably played by Adam Hampton, but he’s a humorless, bland character who not really given much to do other than look good, brood, and pine.

Outside of the game itself, the “reality show” aspects of the film give a bit more life, thanks to the performance of Ryan Merriman (FINAL DESTINATION 3) as the unnamed Host, even though his lack of a name seems to portend to a mysteriousness that’s never there. Merriman’s Host seems to be pulled from a much more satirical film than the rest of JURASSIC GAMES, and one that’s got the energy of a DEATH RACE 2000, livening things up to the point where it’s a positive tragedy that the Host appears within the game wearing a dinosaur skull mask for some inexplicable reason. The reality show aspects are coupled with some nice touches, including a commercial for action figures, so while JURASSIC GAMES never really hits the heights of a SERIES 7, at least it some of those involved seem to understand how to get there. 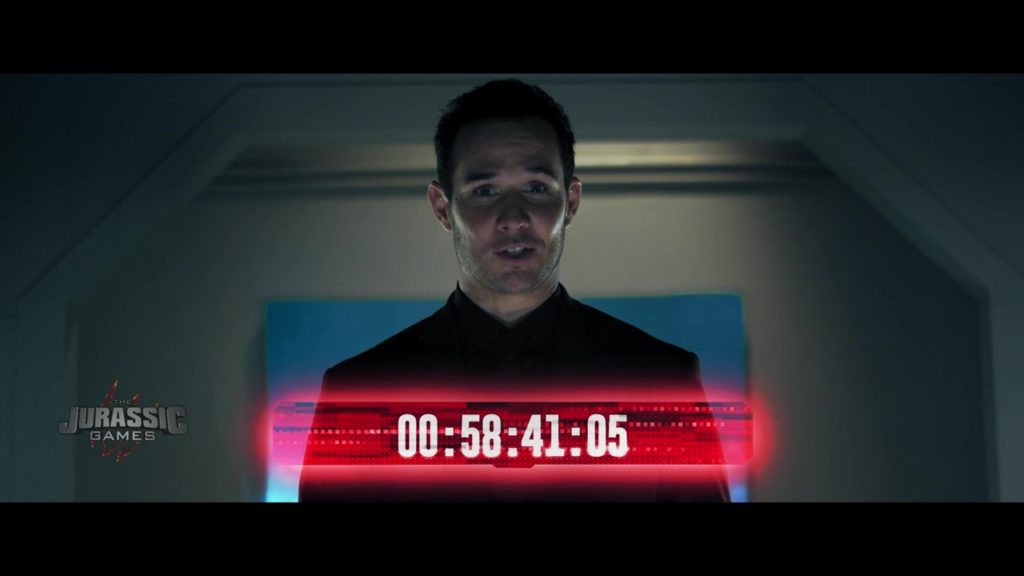 Unfortunately, the occasionally-satirical tone of the “game show” elements are starkly in opposition to the more dour “in-game” elements, even with our contestants being pursued by raptors through a maze. (I do have to mention that the dinosaurs themselves look very good, even if the interaction between the computer-generated creatures and the actors leaves something to be desired, but as the creatures are supposed to be computer-generated within the confines of the plot, this isn’t even an issue.) The film even throws in a pair of final-third plot “twists” that don’t come off as twists at all, as one isn’t built up at all and the other doesn’t really jibe with the extensive build-up it gets, and even in the “life-or-death” scenario of the plot, it’s difficult to gather up much enthusiasm towards whether any of these folks end up alive or dead. 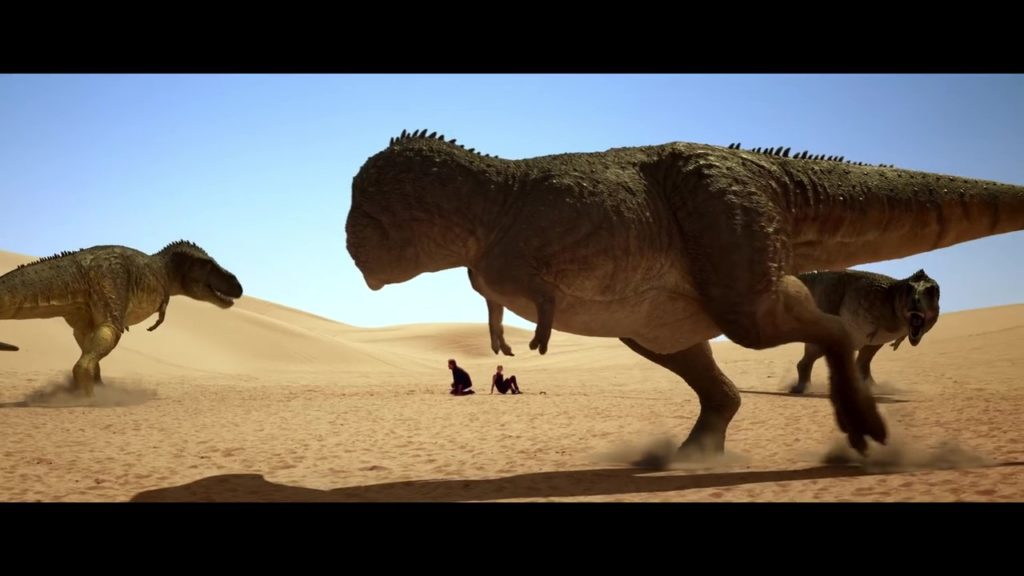 There’s a good idea in THE JURASSIC GAMES (I mean, it’s THE HUNGER GAMES, or more accurately, THE CONDEMNED, with dinosaurs), and there are glimmers of hope that the film will reach the absurdist nature of its premise. These are, however, just glimmers, as the bulk of the film is pitched too seriously to embrace the ridiculousness, but never well thought-out enough in order to fulfill its exploitation or dramatic potential.  It’s a cavalcade of interesting, half-formed ideas, competently shot and briskly paced, but ultimately a forgettable entry in the nascent Sub-Games/Public Audience Death Game subgenre.

THE JURASSIC GAMES is available on VOD on June 12th, and on DVD July 3rd