Stephen King is the most influential voice in horror of the late 20th century. His books have been best sellers since his debut and have gone on to spawn numerous adaptations in film, TV, video games, and other media. King Of All Media looks at those adaptations, starting with his TV miniseries in chronological order. Each week Alejandra Gonzalez and Rob Dean will discuss a new miniseries project of King’s, with today’s installment being on 1991’s SOMETIMES THEY COME BACK, directed by Tom McLoughlin. 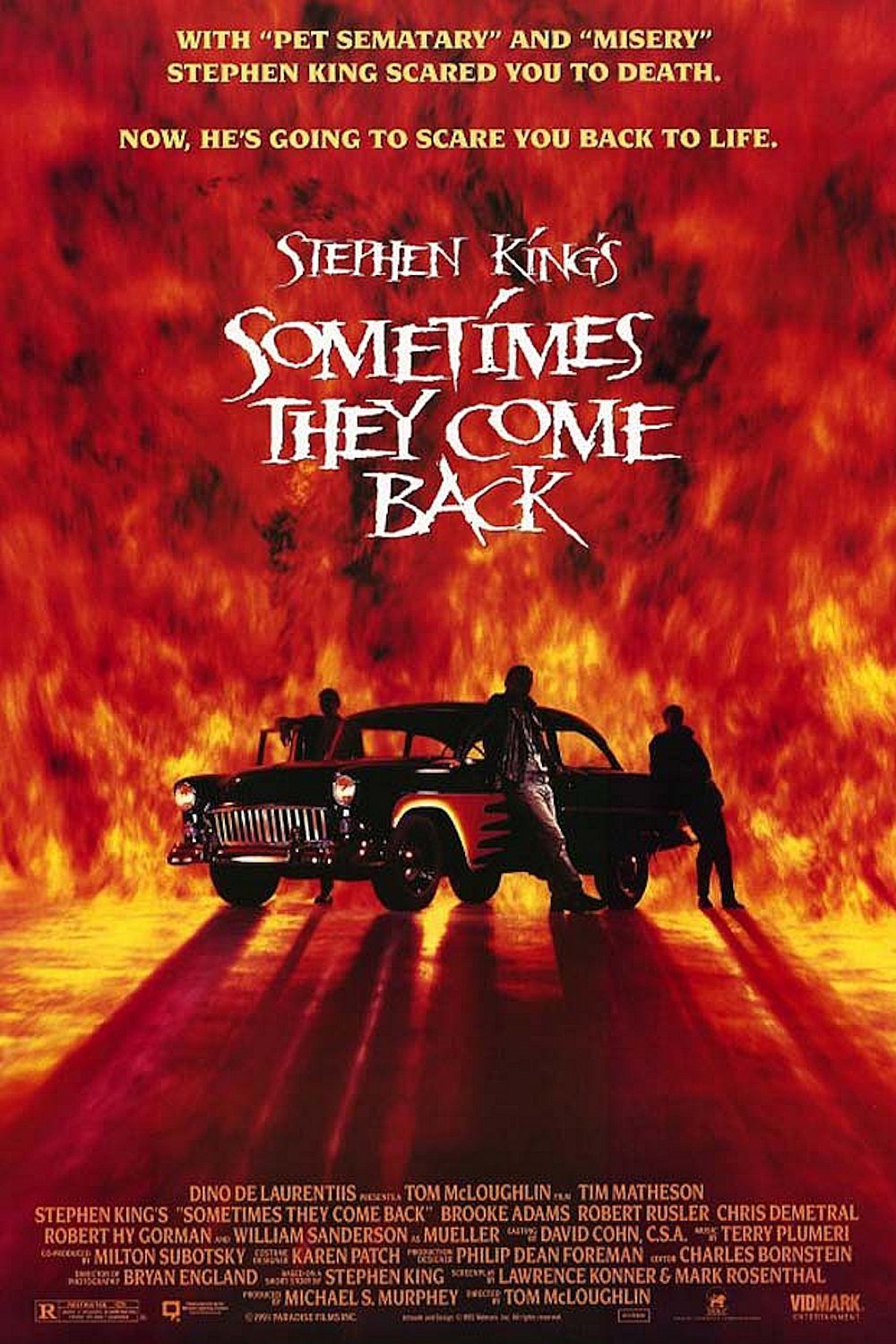 Rob Dean: I was pleasantly surprised to learn that Tom McLoughlin, who helmed the excellent JASON LIVES: FRIDAY THE 13TH PART VI, directed 1991’s SOMETIMES THEY COME BACK. And then I was pretty quickly dismayed by the results. Sure, McLoughlin had made DATE WITH AN ANGEL before this (and would go on to make Lifetime’s CYBER SEDUCTION: HIS SECRET LIFE), but I still had hope that the director of one of the best Jason sequels and his middling but fun debut, ONE DARK NIGHT, had something up his sleeves. This adaptation, unlike SALEM’S LOT and IT, was a made-for-TV movie and not a multiple-night miniseries. The result is a film that feels at once too brief and yet somehow overstays its welcome. SOMETIMES THEY COME BACK, from a King short story of the same name, is about a teacher who finds himself confronted by bullies from his past who torment him and his students from beyond the grave. It was nice seeing some gore and creature F/X (however slight), and Tim Matheson was solid in the lead role of teacher Jim Norman. But man… this thing just had no zip to it, feeling cartoonish and low-budget in all the wrong ways.

Ale, what did you think of this? What did you think was handled well in this made-for-TV movie and what landed with a thud? Did the compact running time versus the previous two entries’ expanded length impact you at all?

Alejandra Gonzalez: Adaptations like SOMETIMES THEY COME BACK make me wonder if some of King’s work is just impossible to adapt, because this did not translate well to film. Or perhaps McLoughlin just doesn’t do tension-building effectively. Though this has been the shortest miniseries we’ve covered thus far, it has felt like the longest. As far as your question about the running time goes, I am extremely grateful that it’s not as long as the last two. The most exciting thing about it was anticipating its end. I don’t want to completely tear SOMETIMES THEY COME BACK down because I do think that it contains a really good concept, but the praise is due to King’s short story and not necessarily the adaptation. I think this one is particularly frustrating because of that; there is nothing worse than a great idea that suffers in execution. I wonder if this adaptation were left in the hands of somebody else if it would have been more effective, or if it were perhaps adapted a few years later (or even today). Some of the effects were painfully dated. Do you think this is a matter of an un-adaptable source or do you think SOMETIMES THEY COME BACK could have been saved in different hands? Is anything really un-adaptable?! I’m having a crisis.

Rob Dean: Oh thank god. I was worried that I was always going to be the sourpuss of these discussions and that I’m just a curmudgeon. But I feel vindicated that you also had problems with SOMETIMES THEY COME BACK.

To get to your larger point about adaptations, I don’t think anything is un-adaptable—it just needs the right filmmakers to make it work. Difficult books have been made into good if not great films, like Cronenberg’s NAKED LUNCH and CRASH; the Wachowskis and Tom Tykwer’s CLOUD ATLAS; THE ORCHID THIEF became Spike Jonze and Charlie Kaufman’s ADAPTATION. Mainly the really hard-to-adapt source materials benefit from an addition by the filmmakers to make it about something more than just the narrative text. Think of Kubrick’s THE SHINING or (again) Cronenberg’s NAKED LUNCH (or even your beloved LORD OF THE RINGS from Peter Jackson), which are not literal beat-for-beat adaptations — but the filmmakers brought something different into it to capture the grander themes and maintain the mood.

I think SOMETIMES THEY COME BACK is an eminently adaptable story. It’s an EC-comics influenced piece of ghosts of the past haunting the present, and could either be really moody or a nice slice of pulp fun with anachronistic greasers roughing up the kids (and also being demons). The problem, I think, is that McLoughlin (and screenwriters Lawrence Konner & Mark Rosenthal) went for a dramatic movie. Before the Lifetime Channel, and after all the prestige miniseries of the ’80s, there was a period in the ’90s where made-for-TV movies were just slices of soap operas that played like melodramatic paperbacks in short. Perhaps presaging his move to making Lifetime movies, McLoughlin really leans into that tone with the ghost of the little brother and all of the pathos the story is played for. I think this could be either spooky or fun or both, but it ends up being boring and unintentionally silly.

Were there any highlights of the movie for you? And with three of these under our belt, what patterns are you starting to see in these King adaptations (not just King tropes, but patterns in how they are adapted and executed)?

Alejandra Gonzalez: It’s generally not difficult for me to find at least one thing to praise about something I didn’t like, but this one was tough. I liked the cast, and I thought Matheson was good as Jim. And, like I said earlier, I really thought the story had a lot of potential ?and would be on board for a remake because of that. I don’t know that I would really recommend this unless someone had a kink for being bored, but I guess it’s worth watching if you’re interested in spooky concepts but scare easily. This is pretty mild on the horror spectrum.

Also, are we ever going to get to a King-adapted miniseries that is evenly paced? In regards to your question about patterns, I find that the ones we’ve covered so far are all uneven in terms of pacing. Even this shorter one! I mean, this was probably the most even but only because it was evenly a drag. I will say this, I find the King tropes pretty endearing at this point. I thought I would get sick of them, or that it would begin to feel repetitive, but it gives King’s vastly different concepts a sense of familiarity and comfort. I love that! So, Rob, will you ever be revisiting SOMETIMES THEY COME BACK or are we going to leave that to unsuspecting suckers? 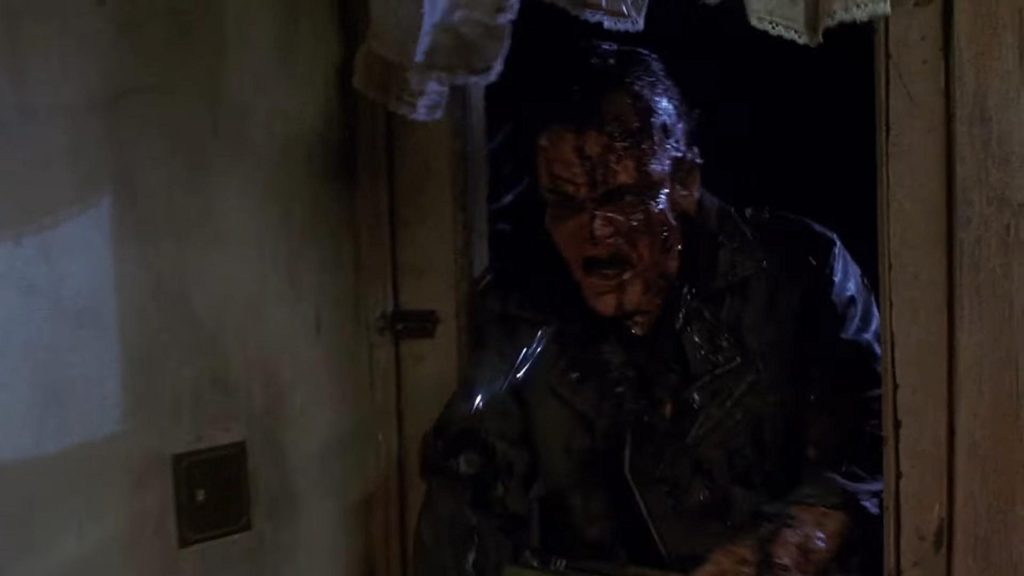 Rob Dean: I think I will pass on ever watching this again. It’s a slight entry that is too bogged down by dramatic elements to be any fun. The film was apparently enough of a hit to spawn two direct-to-video sequels (in 1996 and 1998), but I don’t see how discerning horror fans could latch onto this. Poor execution and lack of awareness of the type of story being told really end up undercutting any element that would make people watch it a bunch or even recommend it to others. It would be cool to have this updated and revisited—maybe bumping up the ’50s greasers to ’80s punks — with a script that relished in the ghoulish elements.  But for now, it’s best to leave SOMETIMES THEY COME BACK as a forgotten relic of a bygone era.