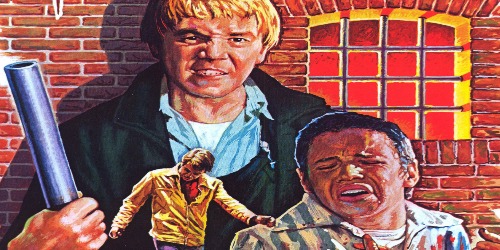 1979 Theatrical version, mastered in HD from the original 35mm negative, will be available on Blu-ray and DVD on June 4th

“A CULT CLASSIC…a triumphant merging of British social realism and exploitation cinema” – DVD Verdict
New York, NY – May 30, 2013 – Kino Classics is proud to announce the Blu-ray and DVD release of Alan Clarke’s Scum, a landmark, and highly controversial, film that takes an unvarnished look at Britain’s violent reform schools. Originally made for television, but deemed too controversial to air, director Clarke re-shot his film for theatrical release, where he was able to heighten his scathing, vitriolic attack on the borstal system, and it is this version of Scum that Kino Classics is bringing to Blu-ray and DVD.

Scum tells the story of Carlin (Ray Winstone, The Departed), a new reform school inmate with a reputation as a hard case. The authorities encourage gang leader Pongo (John Blundell) to humble Carlin, but he beats Pongo down and takes over the mantle of “Daddy”. The guards institute a reign of terror and neglect, with Carlin emerging as an unlikely leader.

One of the most important British films of the last 35 years, Scum was originally made for TV in 1977, but the BBC held off on airing the film, concerned by its unflinching depictions of suicide, rape, and racism. Refusing to heed to censorship, director Alan Clarke pulled the film, and re-shot it as a theatrical feature, which was released in 1979. Clarke was able to turn this theatrical version of Scum into an even more intense and uncompromising film.