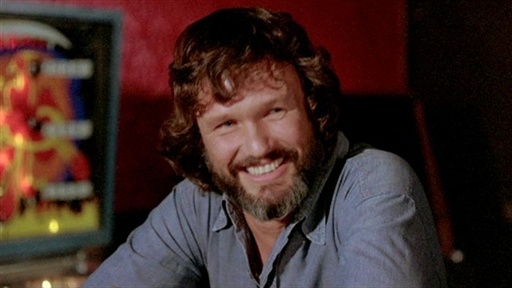 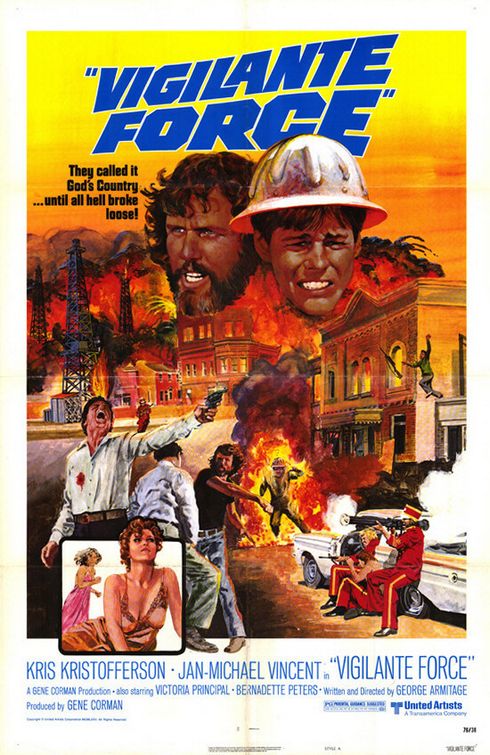 Elk Hills, California is a boom town. Oil-field workers drawn to the town by black gold run wild in the streets, drinking heavily and getting in raucous and very costly bar fights (staged by veteran stuntman Buddy Joe Hooker). This movie is set in the 1970s, when it was made, but it plays out like the Old West. One early bar fight BEGINS with a man getting shot in the gut and then escalates from there. The marauders have shoot-outs in the street with the police. One young man decides he’s had enough. Ben Arnold (played by Jan-Michael Vincent) is a widower and single father with a nice, pretty girlfriend (played by Victoria Principal). Ben tells the city elders, including the mayor (played by Brad Dexter, the member of THE MAGNIFICENT SEVEN everyone always forgets) and David Doyle (best known as Bosley from Charlie’s Angels) that he’s going for outside help.

Ben’s older brother Aaron is a Vietnam vet working a lousy menial job at an airfield. Ben recruits Aaron and his shitkicking drinking buddies from the service to come to Elk Hills to clean it up. Because Aaron is played by the ruggedly handsome and endlessly charming singer, songwriter, and movie star Kris Kristofferson, we feel like we may have seen this movie before: Good-guy gunslinger comes to lawless town and cleans it up for the decent folks. This isn’t what happens. 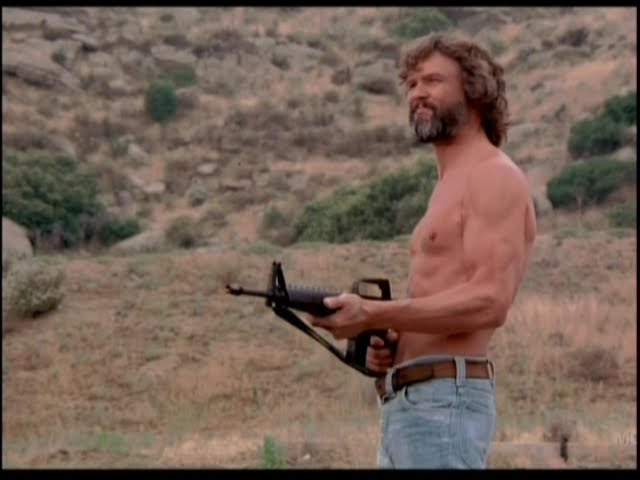 After beating the oil workers down, Aaron makes a deal with some shady characters – one of them played by professional hard-ass Paul Gleason, best remembered for TRADING PLACES, THE BREAKFAST CLUB, and DIE HARD — to shake down the townspeople so that Aaron and his boys can swoop in and collect the protection tax. Aaron takes up with a spacey nightclub singer – Bernadette Peters, who nearly steals the movie away – but his callous treatment of her echoes his cruel treatment of the town. As Aaron’s tyranny escalates, Ben slowly realizes that his brother is kind of a monster, and recruits his own vigilante force to take him down. This happens in a wild, almost absurdly explosive climax well befitting a story with Biblical undertones. Call it Will Kane and Abel. That’s aHIGH NOON reference, son. 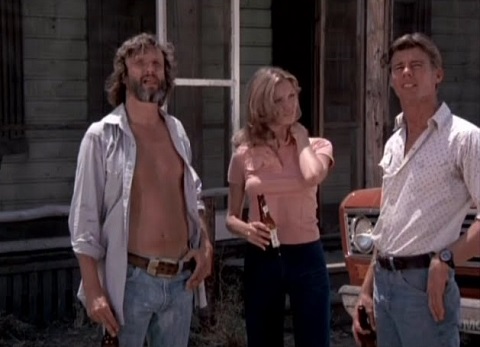 Armitage started out directing for Roger Corman (whose brother Gene produced VIGILANTE FORCE). His feature previous to this one was HIT MAN, an Americanized version of GET CARTER starring Bernie Casey and Pam Grier. After VIGILANTE FORCE, he didn’t direct a theatrical feature until 1990’s MIAMI BLUES, the cult classic adaptation of the Charles Willeford novel starring a young Alec Baldwin. After writing the screenplay for the HBO movie THE LATE SHIFT, Armitage directed another cult classic, the John Cusack-starring GROSSE POINTE BLANK. Next, Armitage directed THE BIG BOUNCE, a poorly-received Elmore Leonard adaptation starring Owen Wilson and Morgan Freeman.

That was 2004. He hasn’t made a film since. This is a mystery that all of humanity should be working to solve.