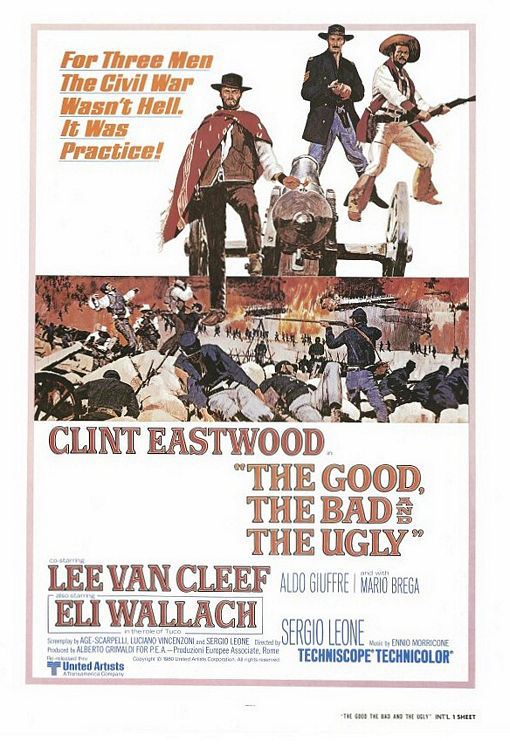 What can you say about your favorite movie?  This one is mine. 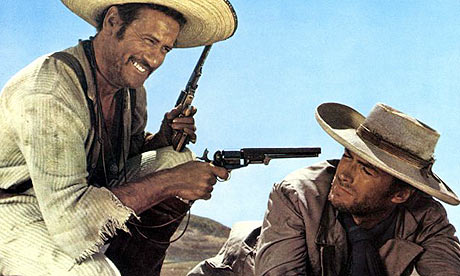 There is literally nothing I can write about THE GOOD THE BAD & THE UGLY that hasn’t already been written about it several times over, and by more famous names than mine.  It’s not exactly an ‘underrated’ movie.  It’s certainly the most straight-ahead entertaining Great Movie that regularly makes the greatest-ever lists. 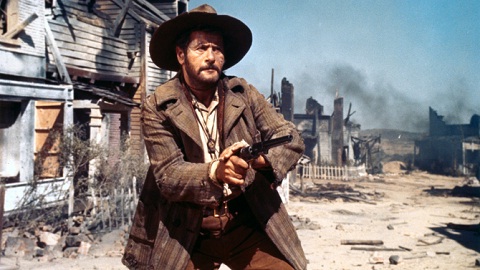 Watching it again recently, as I so often do, I was struck by the fact that it’s not a movie with much of an agenda beyond pure storytelling.  It’s not a grand statement on humanity or history.  It’s a story.  As the poster’s tagline (one of the best ever written) declares, “For three men, the Civil War wasn’t hell.  It was PRACTICE!”  Sure, for some characters in this demented picaresque, war is hell, but for the three leads, those monosyllabic archetypes in the title, war is just an appropriately chaotic backdrop for their self-involved quest.  The whole thing is about three guys looking for buried treasure! That’s it! 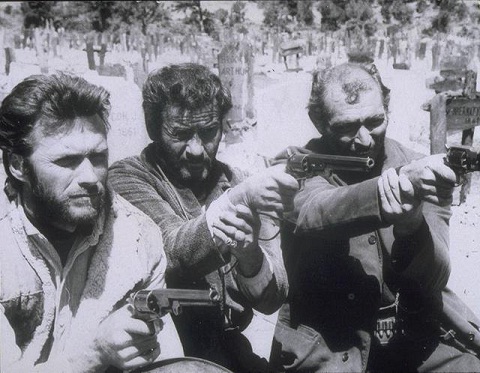 Good, Bad, Ugly:  Does it really matter? They all have the same damn goal.

THE GOOD THE BAD & THE UGLY is a callback to the previous Leone classic, FOR A FEW DOLLARS MORE, in that it stars the blond/brunet tandem of Clint Eastwood (The Good) and Lee Van Cleef (The Bad), although it escalates the setting and the scale (and the running time) to an operatic degree.  Whereas Lee Van Cleef’s General Mortimer was the true protagonist of the previous film, here his Setenza is the nastiest kind of villain.  On the other hand, Clint is basically playing the same guy — there’s not much background offered for him in any of the three Leone films, which is how “The Man With No Name” moniker stuck, despite not being wholly accurate.  (He was named “Joe” in A FISTFUL OF DOLLARS and Monco in FOR A FEW DOLLARS MORE.)  But again, he seems like the same guy, and it’s totally believable that he’s just an enigmatic drifter who saunters through this unofficial trilogy, committing random acts of kindness and murder.

What’s really fascinating to me about THE GOOD THE BAD & THE UGLY, the more I watch it, is that Eli Wallach (The Ugly) is truly the star of the movie. 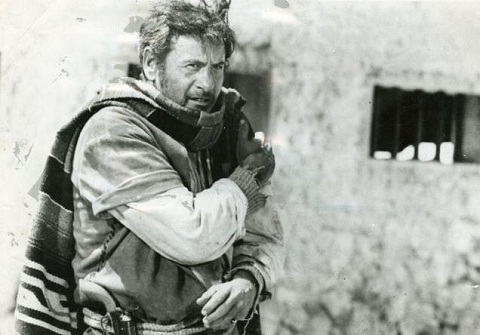 The movie begins and ends with him, and he seems to have the most screen time by a wide margin.  After the first introductory scenes of The Good and The Bad, I don’t think either of them have a scene that doesn’t also include The Ugly.  He not only has a first and last name, but a ton of middle names (Tuco Benedicto Pacifico Juan Maria Ramirez) AND an alias (a.k.a. The Rat), and he is the only one with the backstory — a life of crime which he started in order to assist his sick parents, which has now alienated him from his brother the priest (classic-Italian-genre-cinema mainstay Luigi Pistilli). 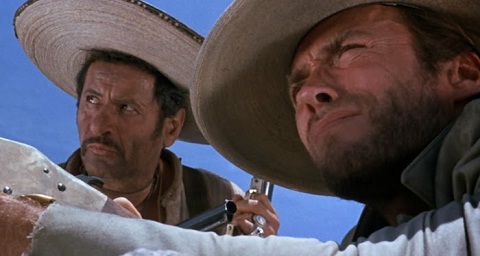 Meanwhile, Clint’s character does in fact have a name, even if it’s probably one that Tuco gave him – “Blondie” – and Van Cleef is referred to as “Angel-Eyes” – which is hilarious if it was also given him by Tuco, but either way is still an alias.  These two guys are flippin’ awesome, striking and iconic, but they don’t run as deep.  THE GOOD THE BAD & THE UGLY is really Tuco’s movie. 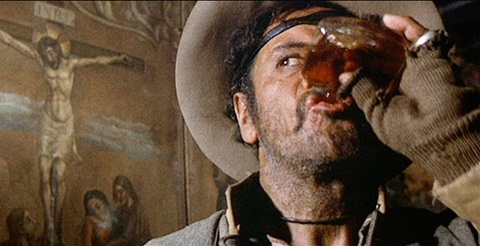 Again, the underrated scriptwriting of Leone and his staff and the accurately-praised career-highlight score of Morricone, along with the cinematography of Tonino Delli Colli, have everything to do with the perfection of THE GOOD THE BAD & THE UGLY, but the importance of the casting of Eli Wallach to the tone of the movie should not be underestimated.  He brings a wealth of serious training to the role, but also a go-for-broke sense of humor.  There’s a real mischievous sparkle in Tuco’s eye – he’s a quintessential survivor and a classic rogue.  Wallach really commits to this role – you couldn’t call him handsome in this movie (although he sure can anchor an extreme close-up), and his accent is as solid as any gringo has ever pulled off.  And he’s funny.  God DAMN.  This movie is so damn funny. Without ever losing its mythic grandeur, it’s riotous.

It’s weird though – for a movie that defines its three main characters in such rigid terms, “good,” “bad,” and “ugly,” the morality (or faltering degree of such) isn’t remotely as rigid.  Clint’s character doesn’t do much good for anyone outside of offering and lighting a couple of cigars, and even Angel-Eyes, as unrelentingly violent as he can be, clearly operates under a certain code of behavior.  Tuco doesn’t seem to have any rules or boundaries or philosophy – just greed, gluttony, and self-preservation – but at least we have a faint suggestion of how he became that way, so even he isn’t strictly “Ugly.” 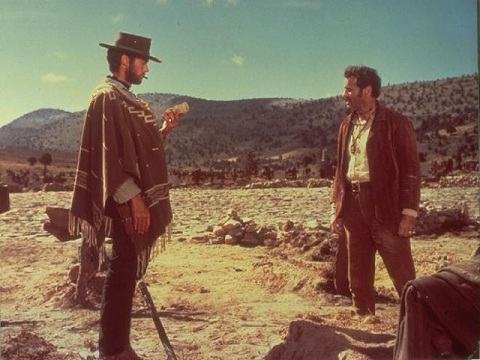 Take a shot at my noose on Twitter:  @jonnyabomb

THE GOOD THE BAD & THE UGLY is playing Tuesday night at 7pm for members of the Victory program at the Alamo Drafthouse in Yonkers. If you’re a member, you know what to do, and if you aren’t, why not join up? You get great screenings like this one. 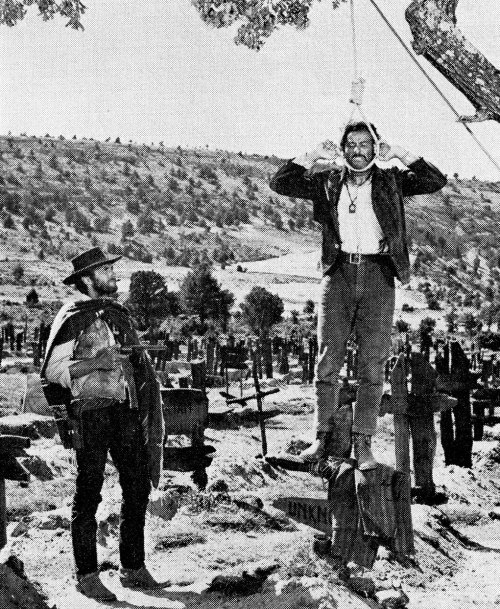 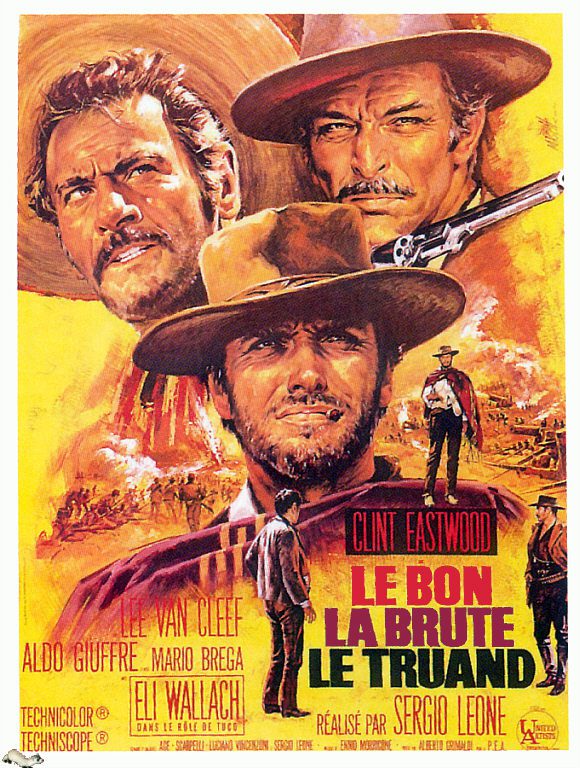