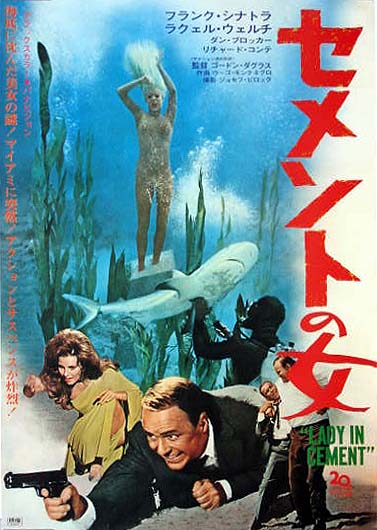 I’m not about to complain too much about my struggle in contemporary American society, which happens to be the struggle of the straight, college-educated, quick-witted, dashingly-handsome male. All the same, it ain’t always easy to be a guy like me. When you have both a brain and a dick, life can get really hard. (Pun unfortunately intended.) This is never more the case then when it comes to watching and thinking about movies.

LADY IN CEMENT is a clumsy, stupid, and borderline misogynistic movie. But I’m lying if I’m not also admitting how damn fun it was to watch – and for some of the same reasons, even. My brain really hates my dick at times like these. 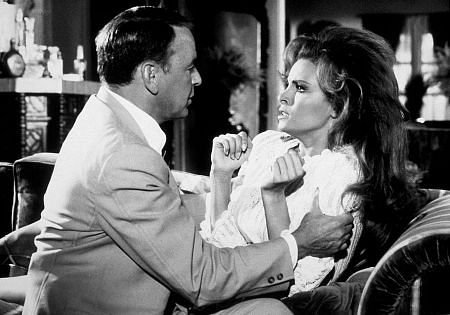 Film noir has a long history of greatness despite having central mysteries that no one cares about. THE MALETESE FALCON, THE BIG SLEEP, THE BIG LEBOWSKI – you watch these movies more for the characters and the dialogue, usually not quite as much out of any avid interest in finding out who did what exactly. And that’s usually okay. And sure, LADY IN CEMENT isn’t technically a film noir. But never has a movie had a mystery you lose interest in faster. LADY IN CEMENT is a detective story where the mystery is so lazily and shoddily constructed that halfway into the movie, you forget what was meant to be solved in the first place. And you don’t much care. And neither do the characters, really.

Frank Sinatra plays the lead, a private dick named Tony Rome. If you’ve seen Frank in movies like THE MANCHURIAN CANDIDATE, you know that he was a surprisingly effective and profound actor, capable of real depth and intensity. However, this is not one of those performances. This is Frank coasting on his considerable reserves of charisma. This movie makes Frank’s goofing off with Dean and Sammy in OCEAN’S ELEVEN look more hard-working and Oscar-hungry than Sean Penn did in MYSTIC RIVER. Frank in LADY IN CEMENT is the definition of airless. Don’t look for the beads of perspiration. This is straight-up vacation moviemaking.

This is Frank saying to his people, “Next picture we’re shootin’ somewhere warm, and make sure you surround me with as many world-class lookers as you got in that Rolodex. None of them mouthy short-haired women’s lib broads either — I want gams and bazooms and that’s all I want to see.”

Thus spake Sinatra. And thus it was.

And I wish I minded more. 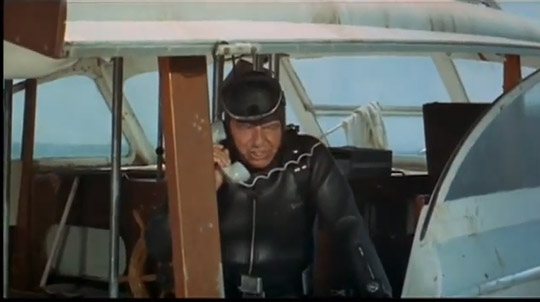 The story kicks off when Tony Rome is (no joke) on a yacht, going diving for sunken treasure off the Florida coast. It looks like a typical 1960s James Bond DR. NO Technicolor paradise. About as far from the darkened back alleys and backlots of classic noir as you could possibly get. Tony Rome dives into seawater bluer than Sinatra’s eyes and swims to the bottom, where he discovers something that only slightly seems to upset his day: A dead body, anchored at the feet by a cement block.

This isn’t just any dead body. This is one of the most fuckable, beautiful blond dead bodies you’ve ever seen in a movie. It looks like what it probably is, which is a 1960s Playboy Playmate holding her breath and her eyes shut in a studio water tank. Hence the first brush with the weird, lusty and misanthropic sexism of this movie. Misanthropic, not misogynist – this movie bears no hatred towards women, but it doesn’t seem to differentiate too much between whether or not they’re alive or dead. It’s the same with the male characters; the only difference is this movie doesn’t ogle the guys.

So Tony Rome finds this mermaid babe and gets a little curious. Just a little. He reports it to an old contact at the police department, and then heads back to his swank bachelor pad, which you can just picture at this point. Here the movie gets a legitimate injection of fun, as a humongous thug type named Waldo Gronsky pays Tony Rome a visit. Waldo is played by Dan Blocker, best known as “Hoss” from Bonanza, and he’s by far the most fun thing about the movie. Blocker is a huge linebacker of a human being, but he’s surprisingly deft with the one-liners he’s given, and Frank clearly gets a kick out of him. There’s a moment where Waldo lifts Tony Rome up and sits him down on his bar, like a boisterous uncle with his favorite nephew, that is totally charming – it’s a nice sign that Frank doesn’t take himself too seriously. Not every major star would let himself be treated like a stuffed animal.

Anyway, I’m not going to recap the entire movie. You pretty much know where it goes from here. Waldo tasks Tony Rome with finding a missing woman, a case which turns out to connect the “LADY IN CEMENT” with some high-society muck-a-mucks. Along the way, he goes from night clubs to country clubs, encountering several varieties of sweet sweet ass along the way.

The main one is Raquel Welch, twenty-eight years old at the time this movie was released, and arguably at the peak of her peerlessness. For my money, there’s hardly been a better bombshell in movies. I’m more of a Claudia Cardinale man myself, and of course I could list all manners of crushes on actresses of more age-appropriate eras, but if you pointed a gun at me and asked me to point to a single definition of cinematic hotness (admittedly, a weird scenario), you might get “Raquel Welch” as the knee-jerk response. As long as it’s just the knee, am I right?

Raquel is the main girl in the movie, and if you’ve seen a clip or a still of her entrance into the movie, where she climbs out of a swimming pool dripping wet – without cement boots or much else – you’d have to concede that the casting directors made the right call.

But she’s not the only girl. Tony Rome also runs into a particularly helpful informant, a barroom floozy, who will no doubt make a major impression on any student of the female form. Confusingly, she’s played by a young Lainie Kazan, whose name you may recognize from movies like BEACHES, MY BIG FAT GREEK WEDDING, GIGLI, the common theme of which tends to be that she plays shrewish, nosy, stereotypically Hebraic older women. She’s a lady who heretofore has only reminded me of Hebrew school teachers I’ve had and hated. Her appearance in LADY IN CEMENT, then, has thrown me into psychological disarray. 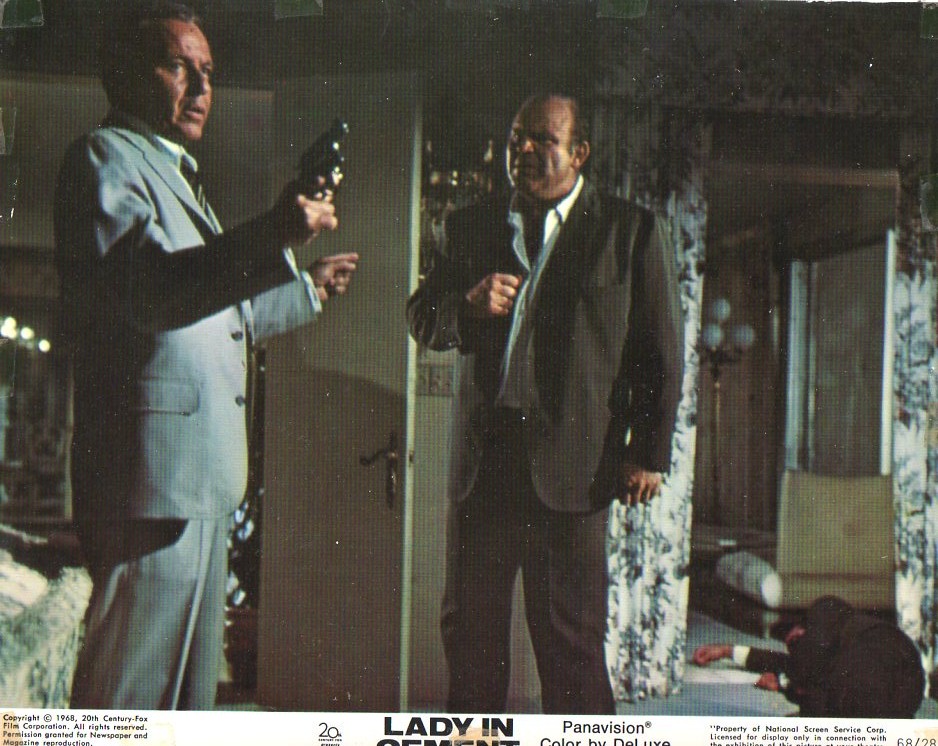 I’ve spent this much time obsessing over cheesecake because there’s little else of substance to LADY IN CEMENT. The women in this movie exist solely as set pieces. The way a Michael Bay movie is populated with a series of loud action scenes and explosions, that’s the way this movie builds its structure around women. If they’re not plot points, they’re decoration. I’m pretty sure the dudes that made this movie might have considered keeping aquariums with shapely cement-ladies in them, if not for the whole morbidity thing.

But ultimately it’s harmless, especially now, as a relic of a time and a cultural attitude which has long since passed. A movie as unrepentantly horny as this one would never come out of a major studio, and there’s no modern male star with the kind of balls to risk the inevitable feminist backlash. Oprah would probably find a way to nip the enterprise in the bud and stop it before it started. But I’m not sure it’s a bad thing for guys to watch and enjoy dumb movies like this one. Girls have soap operas and gossip mags. This is that kind of fleeting fantasy for us. It won’t wreck any relationships or corrupt healthy behavior, not as long as you’re sane enough to discount it as the trifle it is. I’ve said it before and I’ll say it again: “Guns kill people. A couple boobs never hurt anybody.”