What’s doin’. Bastards? Paranormal activity, witchcraft, notorious murders, infamous cults, conspiracy theories, missing persons? Done and done. Although I attempted to watch this when I was a kid, my over-protective mother jumped in front of the TV and sent me to my room to play with my Star Wars figures. Guess I am going to finally get a chance to eyeball this good shit, huh? 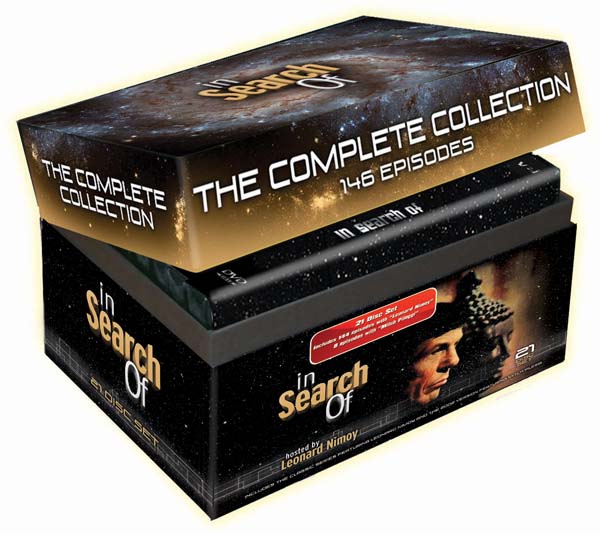 In Search of … The Complete Series

Hosted by the Iconic Leonard Nimoy, a Look at History’s Greatest Mysteries, the World’s Most-Enduring Myths & Things That Go Bump in the Night

Complete Series Available in for the
1st Time in Any Home Entertainment Format, Dec. 4th

Entering our galaxy for the first time in any home entertainment format is In Search Of… The Complete Series, available December 4th in a special DVD collector’s set from Visual Entertainment, Inc. (VEI).

Hosted by the iconic, Emmy Award-winning Leonard Nimoy (“Star Trek”), this popular documentary television series (1976-1982) traversed the globe with a team of researchers, scientists and highly skilled technicians to conduct in-depth investigations of a wide variety of mysteries and to explore the unexplained.

From the rumored existence of Nazi plunder to the real-life inspiration for Sherlock Holmes to tracking the Loch Ness monster to reincarnation to UFO cover ups (and much more!), it’s an entertaining romp that no sci-fi fan, mystery enthusiast, scientific devotee or history buff will want to miss!

BONUS:
Two Rod Serling-hosted specials, which aired prior to the start of the Nimoy-hosted series, and the re-launched 2002 series (eight hour-long episodes) hosted by Mitch Pileggi (“The X-Files”).

In Search Of… The Complete Series is presented in full screen (aspect ratio: 4×3) and stereo.

Pre-orders aren’t open yet but we’ll let you know when they open up.