Yes. We have another DJANGO UNCHAINED trailer. In fact, we have the final trailer before Django unloads in theatres on Christmas day. However, we also have the soundtrack listing with pre-order information. So have a look at the new trailer which is full of one-liners and bullets (though little new material which is find by me) and then scroll down to read the press release for the soundtrack and pre-order that good shit.

BEVERLY HILLS, CA – NOVEMBER 28, 2012 – The Weinstein Company, Quentin Tarantino and Loma Vista Recordings today announced the release of QUENTIN TARANTINO’S DJANGO UNCHAINED ORIGINAL MOTION PICTURE SOUNDTRACK. DJANGO UNCHAINED marks the first time that Academy Award®-winning and Grammy® Award nominated director Quentin Tarantino has collaborated with artists to create original music for use in the film and original motion picture soundtrack. The soundtrack will be in stores and at all digital retailers on Tuesday, December 18th. The film release of DJANGO UNCHAINED will be on December 25, 2012 by The Weinstein Company in the U.S. and by Sony Pictures internationally. Pre-orders for QUENTIN TARANTINO’S DJANGO UNCHAINED ORIGINAL MOTION PICTURE SOUNDTRACK are available starting today HERE 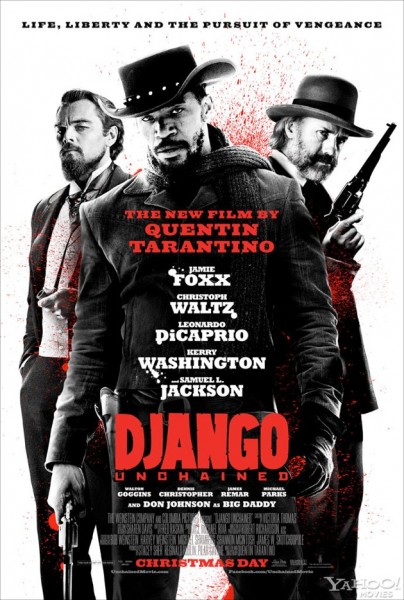 CLICK THE POSTER TO PRE-ORDER THE SDTK FROM AMAZON.COM