SHOOT FIRST, DIE LATER is one of the few Di Leo films I have yet to see. If you live near the New Beverly consider me jealous as fuck. We should be getting a screener of this soon so we’ll let you know what we think.

Here’s more from the press release: 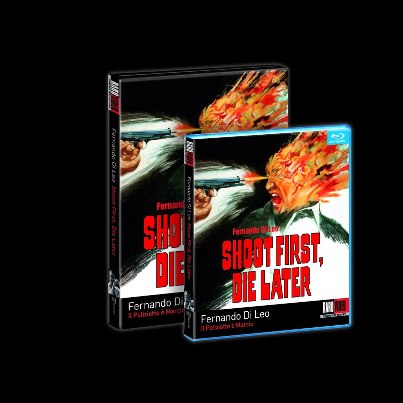 (Los Angeles, CA) SHOOT FIRST, DIE LATER is one of the most impressive crime thrillers ever made by the great, and often referenced by Hollywood, Fernando Di Leo. It is a lost masterpiece of Italian cinema.

Desperately sought after and never before released worldwide – RaroVideo is proud to be releasing the tough, exciting, dramatically potent, well acted and action packed film, SHOOT FIRST, DIE LATER. Luc Merenda gives the performance of his career as a highly regarded police detective who is taking syndicate money in exchange for departmental favors. His father, a simple man, also works for the department but on a lower rung; he isn’t jealous of his son, but rather proud of him, little knowing that he’s a crooked cop. A series of events leads the young detective to ask his father for a favor (he wants a certain police report that is desired by the syndicate) and it doesn’t take long for the detective’s father to realize his son is on the take… which leads to numerous complications.

SHOOT FIRST, DIE LATER has yet to emerge on DVD anywhere in the world, leaving it at the mercy of terribly quality bootlegs. Fortunately, RaroVideo and The New Beverly have made this film available to screen for the first-time-ever in the US on December 22 at The New Beverly Cinema (7165 Beverly Blvd) in Los Angeles in advance of its debut on DVD and Blu-ray.

RaroVideo will finally release this crime masterwork on DVD and Blu-ray early in 2013, Date is TBD.