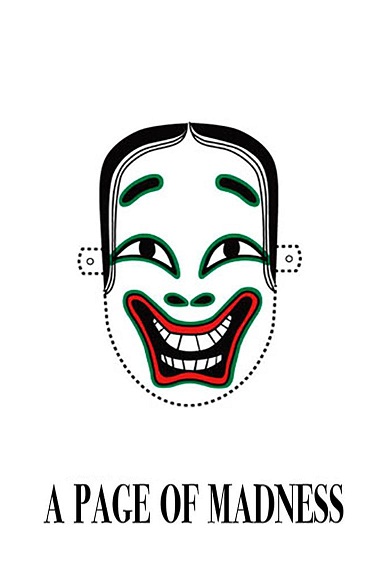 Not to sound like a hack, but I can’t really think of a movie more perfectly-titled than A PAGE OF MADNESS. This silent 1926 Japanese horror film clocks in at about an hour with no intertitles to give any idea of the specifics of the film. Not only that, but it uses what was at the time incredibly experimental fast-paced editing, dissolves, visual overlays, and camera movements to help put you in the unstable state of mind in which the characters exist.

In other words, this movie is completely bonkers nutso.

Set in an insane asylum, the main character is the institution’s janitor. His daughter, without his knowing, comes to the asylum, where her mother is a patient. The janitor’s daughter is surprised to find her father working there and to learn that he took the job because of his guilt  for being abusive, to the point of her needing to be committed. When he finds out his daughter is getting married, he gets worried that the wedding might be called off by the groom and his family if they learn about the mother’s condition.

For obvious reasons, the janitor has kept his relationship with his wife a secret from the rest of the staff of the asylum, but when he gets into a fight with some patients where his wife gets hurt, he begins to start to have strange and violent fantasies. And then, after a while, he begins to lose grasp of what is real and not.

But I’ll be perfectly honest… I’m not exactly sure if that’s exactly what the movie is about.

What I’m utterly certain of is that some of the shots of the patients in the asylum are absolutely unnerving and terrifying and some of the creepiest images I’ve ever seen put on film. There’s no doubt that some it has to to do with the deep granular feel of the old black-and-white film stock, the odd speed in which it’s played back, and its blown-out tones.

But also, the acting is amazing.

If someone were to tell me that these were actual asylum patients, I would absolutely believe them. This feels like it could be some sort of FREAKS–like situation, where people with real-life conditions and differences play themselves.

The experimental nature of some of the shots also add to the feel of genuine insanity and loss of reality: Dissolves to the point of abstraction, faces bent as if in funhouse mirrors. Besides some obvious elements of German Expressionist movies like THE CABINET OF DR. CALIGARI, comparisons to aspects of purely experimental dadaist films like BALLET MECHANIQUE would be apt, or the pseudo-documentary HAXAN. Perhaps this even being a precursor to Vertov’s MAN WITH A MOVIE CAMERA.

This is true art-house horror.

All of these films have visual elements comparable to A PAGE OF MADNESS, except this movie is explicitly trying to be a narrative horror film that creeps the hell out of you. 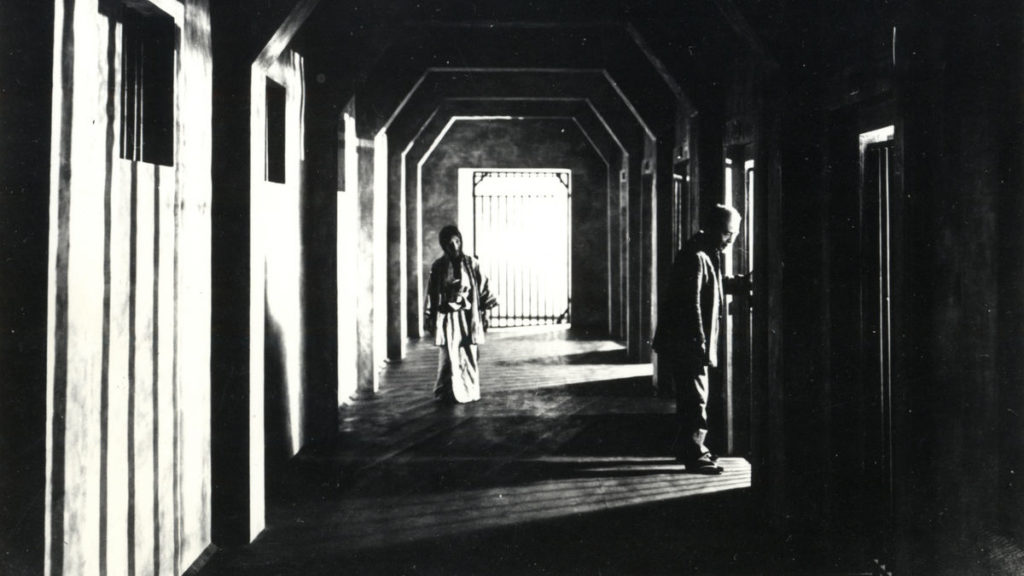 As I mentioned before, what adds to the mental confusion is that there are no intertitles of narrative text to guide you through this silent film, unlike most films of the era. You never really know exactly what’s going on, plot-wise. This strange situation actually has a pretty reasonable explanation. It’s due to two factors. The first is that the director simply didn’t want them. He wanted the film to be an unrelenting visual melange of horror. The second is the Japanese silent film tradition of the benshi.

The silent film era in Japan maintained an aesthetic and performative connection to theater, particularly kabuki and Noh, where narrators were used to aid performances. Benshi would stand at the side of the film screen and perform along with the movie, acting as either an omniscient narrator, or sometimes voicing characters on screen. They would do so with all silent films, even film with intertitles, or foreign films.

Japanese films of the era were actually made with benshi in mind, either writing scripts specifically for them to read with their films, or writing films with particularly famous and popular benshi in mind – kind of like writing a film for a specific actor. Benshi were such an integral part of Japanese film culture that they could often be as famous, if not more so, than the actors themselves.   What makes A PAGE OF MADNESS all the more unnerving and confusing is that it was written specifically for benshi performance.

And that script has long since disappeared.

At this moment in time, no one knows exactly what was written in order to explain and add to the story on screen. All we have are the visuals. That aspect alone adds a haunting meta aspect to the film. It is itself a sort of ghost of the movie it once was. In fact, the movie itself was lost for 45 years, from 1926-1971, until the director found a print of it in his storehouse.

Being that this movie is silent, you have the wonderful ability to soundtrack it yourself. You can easily pull it up on YouTube, hit that mute button, and score it however you want. The version I saw had some creepy traditional Japanese instrumentation mixed with more experimental contemporary classical elements by The Alloy Orchestra. It definitely worked well. But at the same time, you could put on a great goth or synthwave mix and help add to the exact tone you want.

Though I would personally recommend some Iannis Xenakis.

A PAGE OF MADNESS, a ghost of a film, back from the dead.

And ready to haunt you. 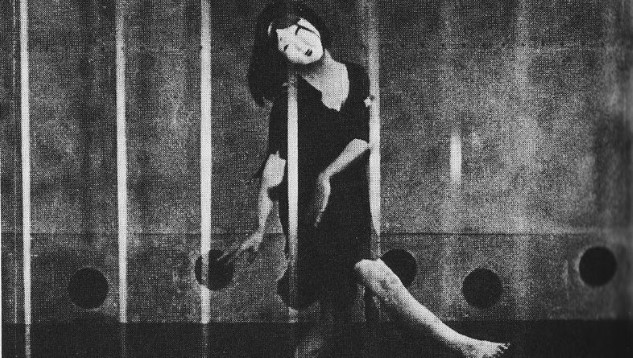 Raphael Jose Martinez
Raphael Jose Martinez lives in Chicago where he writes about things he sees and hears. He's a programmer and assistant film projectionist at Doc Films. He also tries to go to the movies with his mom at least once a month because he's a good son.