Wes Craven passed away in 2015, leaving a massive heartache in the horror community, one that still lasts to today (giving us a tragic trifecta of loss with both Tobe Hooper and George Romero no longer with us). What Craven left behind is a wild, insane filmography of iconic horror films like THE HILLS HAVE EYES, THE LAST HOUSE ON THE LEFT, SWAMP THING, SHOCKER, THE SERPENT AND THE RAINBOW, THE PEOPLE UNDER THE STAIRS, the immortal two-fer of the SCREAM franchise and A NIGHTMARE ON ELM STREET and its late era, meta-sequel WES CRAVEN’S NEW NIGHTMARE – the list could go on and on. In this landscape though, dotted out like little civilizations with their rabid citizens/fans are the lesser, little respected titles like DEADLY FRIEND (a killer robot smashes someone’s head with a basketball and people hate this one?), VAMPIRE IN BROOKLYN (I’d have to re-watch this one), DEADLY BLESSING (which is just fine), MY SOUL TO TAKE (which is a fun, bonkers slasher film) and the cash grab (which ironically ran out of money during production) that Craven disowned – THE HILLS HAVE EYES PART II. 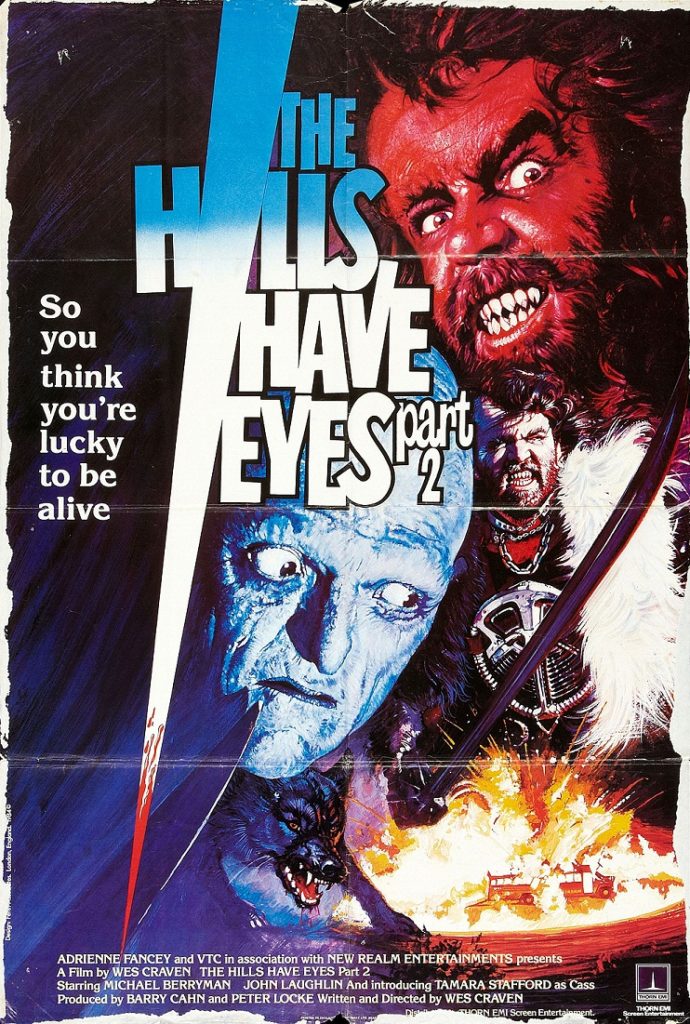 The plot of the 1984 sequel concerns a dirt bike team who have the misfortune to wander off onto the same beaten path trod by the unlucky family from the 1977 original, while heading out to a race. They take a shortcut, due to daylight savings time (yeah) and their bus breaks down outside of an old mine, and in short order are set upon by a batch of savage cannibals, one of whom is Michael Berryman’s Pluto, who was thought dead at the end of the first film. Once night falls, the crew find themselves getting picked off one by one, with the slowly diminishing hope that they’ll survive until dawn.  PART II is just over half a film – a scotch taped slasher in the grand tradition of horror films in the ‘eighties that peppered their sequels with flashbacks to pad up the run time a smidge – from the FRIDAY THE 13TH sequels (more on the composer, Harry Manfredini in a moment) to SILENT NIGHT, DEADLY NIGHT PART 2. At least here the flashbacks are only a few and stop once the story is kicked into high gear. The skeleton remain the same: a stranded group get set upon by the gnashing teeth of maniacs, but the insides were all reconfigured to shift the film’s sub-genre from survival horror to body counter as a presumed attempt at filling the coffers with greenbacks. Whether or not, Craven though it was a slasher remains a mystery, but I’ll tell you – it is.

Tethering the sequel so closely to the events feel flawed from the jump because Craven mostly does nothing with it. Bobby (Robert Houston), one of the two survivors from the ’77 film shows up in the opening scene, talking to a psychiatrist – a scene that is interspersed with flashbacks from the first film’s climax. He appears in once more scene, then disappears for the entire film. This is puzzling because it hinders the film from its outset. Keeping Bobby out of the main film is fine, other slashers have cut down previous film’s survivors before the credits roll, but having one of the family survivors would have given the film personal stakes and why have him show up at all? Maybe this was all part of Craven’s idea, or maybe Houston didn’t want to come back entirely. Both are fine, but it’s a missed opportunity. So, the bulk of the returning characters end up being a cast of characters, who barely feel like characters, but nevertheless ingratiate themselves to us because of their light, energetic performances like Peter Frechette as Harry, Tamara Stafford as Cass (who gives a solid blind person performance) and Kevin Blair as Cass’ beau, Roy. Ruby (Janus Blythe) now calling herself Rachel finds herself returning to a nightmare she thought she’d escaped, and now in possession of a dog whose partner she was once forced to eat. Her PTSD is mostly explored but goes nowhere ultimately, even with a scene where she squares off against Berryman’s Pluto a couple of times (which has decent action direction by Craven). She’s killed off unceremoniously, and isn’t even murdered by Pluto or new cannibal The Reaper. She hits her head on a rock and that’s the ballgame. Why then don’t we have the sequel be completely unrelated to the first film? You don’t need to have returning characters to invest a new audience. Hell, the flashbacks are mostly unnecessary because there’s a large exposition scene during the jaunt to the desert!

There’s a disjointed nature to the proceedings herein. First, there’s a whole segment where Pluto nabs one of the team’s dirt bikes and there’s a race through the desert that feels so out of place – like the cold open to an episode of MacGyver. The bikers are off pulling stunts, yelling “yippee” and all that while chasing a murderous flesh-eater. This scene also contains some of the worst stunt photography ever as I clearly caught the doubles during the quarrel with Roy and Pluto. There’s also a part of the film that reeks of rewrites, which is no surprise as Craven had to return to the PART II after the box office success of A NIGHTMARE ON ELM STREET. In it, two of the characters, Foster and his girlfriend Sue sneak off to the bus for a little bit of snogging, which hey that’s awesome that the two black characters get to hook up, but later Foster then goes to peep on one of the other female characters while she’s showering, and the way the interaction goes down with his girlfriend, it almost feels like the two never had the previous intercourse in the first place. It’s a real have their cake and eat it too scene, get the nudity in but sacrifice any continuity as a result. Did you like Harry Manfredini’s score for FRIDAY THE 13TH? Well, you’ll like it here too, as Manfredini straight up reuses its score for the film. It’s nothing new for Manfredini – the man has never met a slasher stinger he couldn’t recycle. It’s one thing to use similar motifs, or rearrangements, but it’s a hack copy and paste job and trust me, listening to his scores for the FRIDAY films – the dude changes nothing throughout the six films he scored there. It works alright, I guess, but because it is music constructed for a different film, it feels off completely. 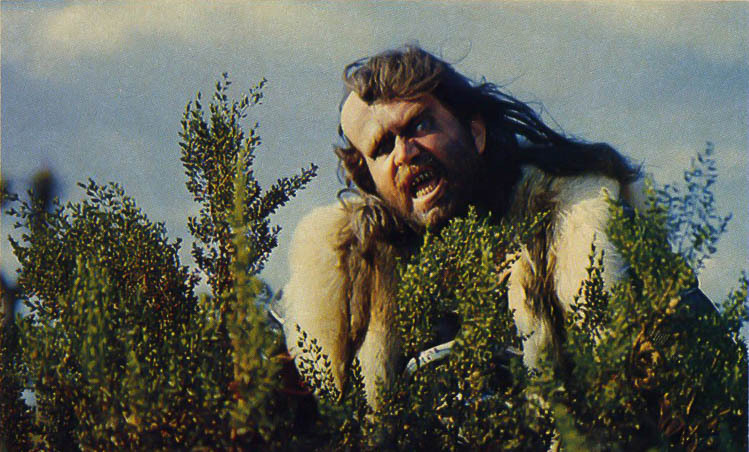 The film itself feels way less violent and cruel than its prior entry, but there’s still adequate blood spilled to give audiences a good time, once the film reaches its third act, the kills spike at a decent clip through to the end (there’s a great throat slash that sprays lots of blood). The barbarism though doesn’t feel as if it’s being shot through Craven’s usually capable lens. He had a way of capturing the disquieting inhumanity via acts of violence, think back to the way the trio of psychopaths acted after they assault Mari in THE LAST HOUSE ON THE LEFT. That being said, he is still capable of spooking people, Craven couldn’t be a bad director even if he tried. The scenes of the stranded folks walking amongst the desert bushes, with the cannibals whispering their names is effectively eerie, and the last part of the film with visually impaired Cass wandering around the mine, feeling her way past her friends’ bodies and through The Reaper’s abattoir gives the film a low-grade energy. There are some stone-cold pretty women in the cast from our heroine Tamara Stafford to Penny Johnson Jerald and Colleen Riley, both of whom doff their tops – scenes that seared into my teenage brain, and okay, my adult brain as well.

There’s a multitude of reasons why a filmmaker would renounce their feature film. We know through motion picture history that filmmaking is a painful, personal process and if the memories of struggling to bring the story to life are too much to bear, better that you toss the whole thing out and move on to something that makes you feel better. It happened to David Fincher with ALIEN3 and it happened here. One doesn’t need to dig too deep to get to the root of why Craven summarily shunned the sequel. THE HILLS HAVE EYES PART II was made at a time where his eye was on a much greater prize – A NIGHTMARE ON ELM STREET – which hadn’t been made yet, but was released prior to this feature film.  I know Craven considers this an “old shame” and it saddens me to think that. I don’t think it’s a bad film at all. It’s a crude copy of something that worked, made by a filmmaker that wasn’t quite on his game at bat, but it’s far better than some of the other dreck that hit video store shelves in the eighties. That he wasn’t around to see the stunner of a special edition that Arrow has put out for his lamented sequel is a bummer. Because the transfer looks great. I’ve only seen PART II on VHS or a murky transfer on Amazon Prime, but now the night shots are crystal clear. There are two articles in the accompanying booklet for the film and foldout poster! For a title that’s been oft-maligned, it nice that it finally got a little TLC after its creator has left this world.