Do you think fictional slasher movie villains are capable of finding inner peace? For most of them, their violent bloodbaths were predicated on enacting revenge for the wrongs they felt were thrust upon them, like Mrs. Voorhees losing her son or Kenny Hampson being goaded into making out with a dead body. They usually end up dead before the credits roll, unable to bring their journey of slaying to its natural endpoint – that they can never end what drove them to madness in the first place. Others just continue on in cash-grab sequel after sequel, their acts of terror driven by an unending hunger for carnage so much so that they most likely don’t even remember the motivations for why they picked up their butchering implements in the first place. Getting resurrected time after time, it seems like they’ll never find tranquility, it seems like they’ll be trapped in hell forever. This is the key theme for episode eight of American Horror Story: 1984, “Rest in Pieces,” written by Adam Penn and directed by Gwyneth Horder-Payton, and the season’s overall thesis in which the perpetrators of murder and their victims, living and dead, find themselves stranded at or returning to Camp Redwood, so that they may undertake the only thing that will give them equanimity—cold-blooded revenge. Don’t the ghosts of our past inform our present?

For Brooke (Emma Roberts), it’s all about making her way to Camp Redwood so that she may finally kill Margaret (Leslie Grossman). This won’t heal the wounds that she experienced while incarcerated for five long years, but this is how she believes she will achieve serenity. In her mind, she’s righting a wrong that nearly got her executed. Nothing at this point will stop her, not even tangling with a serial killer who is obsessed with the Night Stalker. For Donna (Angelica Ross), Brooke’s partner in crime, it’s trying in vain to prevent our final girl from journeying down the same path as her murderous father (or Mr. Jingles). After spending the last few episodes removed from the rest of the cast, Brooke and Donna finally find themselves on Camp Redwood property, courtesy of a National Enquirer reporter, Stacy (Stefanie Black). The tabloid writer threatens to reveal their outlaw identities, but is coerced into keeping it secret when Brooke and Donna offer her a tour of the haunted grounds, using their first-hand experience to give the writer’s words a personal flavor. 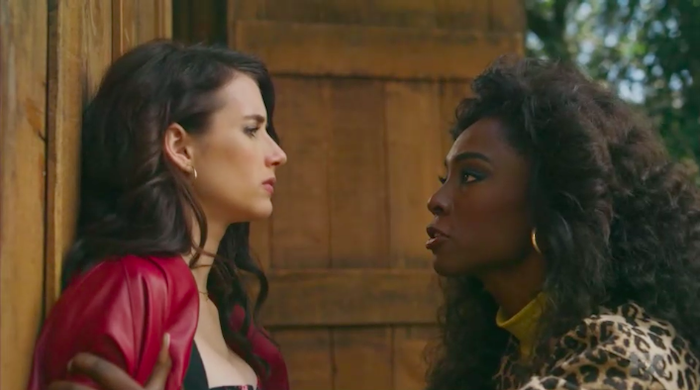 I like that events take a close emotional turn here, because when Brooke attempts to kill Stacy, Donna fights her off (to the tune of Survivor’s “Eye of the Tiger,” which…okay?) so that she ensures that she won’t let the dormant evil within everyone to become a full-fledged virus inside our heroine. Sure, there’s an underlying purpose to helping Brooke, to course correct from the vile misdeeds that started when she let the broken Benjamin Richter (John Carroll Lynch) out to return to a place and butcher innocents. Their subplot is where ’80s nostalgia thrives, with Brooke learning that one of Donna’s intentions in getting her back to Camp Redwood is not only to better herself as a person, it’s to place her on her rightful throne as “final girl.” First of all, I enjoy the meta-angle of exploring the filmic history of the final girl (could’ve used some examples, people) and I was amused by Donna’s incredulousness at Brooke’s suggestion that she could be a final girl too. I must interject though Donna, there are *some* black folks that make it to the end of a horror film (just a few years earlier in NIGHT OF THE DEMONS, a black character made it to the film’s end and survives…okay, he was ridiculously cowardly and the numbers are still on her side on this).

Meanwhile, Richard Ramirez (Zach Villa) spends his time prowling around the concert setup hoping to get a good look at his idol, Billy—in a mostly funny interaction with a roadie, he isn’t allowed to touch the singer’s rings, but gets a guitar pick as a consolation prize nonetheless. His battle with Jingles continues this week, but is less of the focus as he partners up with Bruce (Dylan McDermott), the hitchhiker slaying murderer from last week, who gives us a great moment in the cold open where he rails against Mary Kay cosmetics at a saleswoman whose pink Cadillac he’s stolen. They, along with Margaret, align to kill Stacy and come up with an insane business plan for Camp Redwood—kill all the bands (save for Billy Idol, obviously) and use their ghosts to turn the camp into a morbid rock ‘n’ roll tourist attraction a la Graceland or the Dakota Hotel in New York. This neatly ties into the modern, monetized exploitation of serial killers that’s rampant in 2019 and also right in line with the show’s brand of intense absurdity. Additionally, it ties nicely to a Stephen King short story, “You Know They’ve Got a Hell of a Band,” about paranormal popstars in a small town. 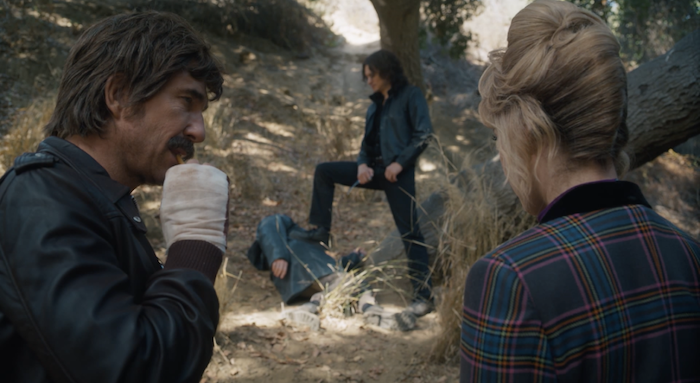 A thought-provoking story kernel floats up while we watch the relationship of Montana (Billie Lourd) and Trevor (Matthew Morrison) continue. They barely knew each other before the killings at the camp started, and only now are connecting after her death—but the emotional, erotic tether they have to each other feels realistic and their bond through their loneliness feels palpable. When Trevor finds out that Montana was with Ramirez prior to and during their ’84 spree, she reacts as if he sees her differently now, that she’s a monster (which, yeah, she kind of is) – but her argument actually brings up a relevant point – when men are caught doing inhuman deeds: murder and rape, their first responses are to always blame women. Serial killers? “It was my mother.” Rapists? “Oh, she wouldn’t go out with me,” or “did you see what she was wearing?” Though she was hitched up with Ramirez, she was not responsible for his actions, other than goading him to kill Brooke. Which, now that I think about it, makes her a little hypocritical because Brooke wasn’t responsible for her fiancé’s actions when he went off to kill folks at their wedding. Still, it’s food for thought and not the kind of depth we expect from this program.

The ghoulish revenants of the ’84 counselors is where the whole story feels repetitive, especially given that we’ve already trodden this ground in “The Lady in White.” I mean we get it, Xavier (Cody Fern) wants Jingles dead for disfiguring him and ruining his potential career in film and television. Yes, there’s the revelation that Montana was the one who brought Jingles to the camp, but we’ve seen the whole trial with Jingles defending his life, and the undead gang acting as judge, jury, and executioner. Lynch makes a meal of his pleas for the counselors to spare him so that he can kill Ramirez and save his son from the killer’s blade, and it falls on deaf ears, as they put him in a boat and push him out to the lake, where he’s pulled underwater and drowned by his brother (again, the FRIDAY THE 13TH—and FRIDAY THE 13TH PART 3D—connection here). Jingles gets the heartwarming ending though, when he connects with his mother (Lily Rabe) and brother at a shore side picnic after he is resurrected in the episode’s final moments. My only quibble with this scene is how Bobby is back, because as we know the lore of Camp Redwood to be, Lavinia Richter’s death and blood spilling into the ground is what caused the grounds to be cursed and Bobby died before she did. Still, I don’t let this little plot problem bother me too much as the emotion of the scene overwhelmed its illogical nature. Richter gets some semblance of tranquility, skipping rocks with the brother whose death he’s blamed himself for, and American Horror Story: 1984 has subverted audience expectations by giving the fearsome slayer from the first episodes a stirring coda as the season comes to a close. Color me surprised. 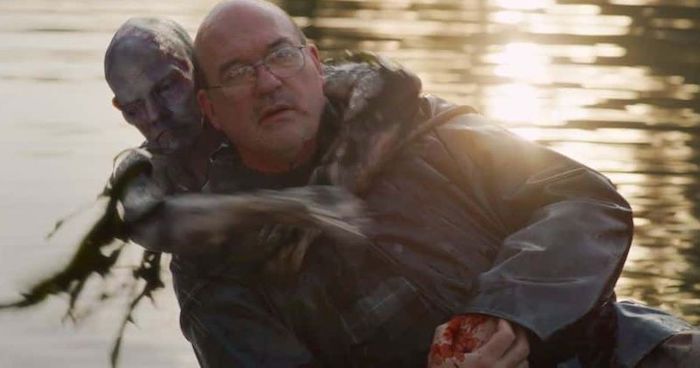 For a show like American Horror Story, which has peddled in some of the wildest shenanigans on television, it’s surprising how relatively static and tame this episode was—I guess “tame” is relative considering it is an episode filled with Leslie Jordan chopping up the band Kajagoogoo (him seeing their apparitions playing “Too Shy” is chuckle worthy), a satanically charged serial killer, and ghost coitus. The penultimate episode of American Horror Story: 1984 could’ve used some of the manic inspiration this fantastic season has had thus far. That’s not to say that “Rest in Pieces” is bad; it’s still very fun and the cast is still giving their all to the material. But it felt like the episode was a rest stop on the road trip to next week’s grand finale, the appropriately titled “Final Girl.”