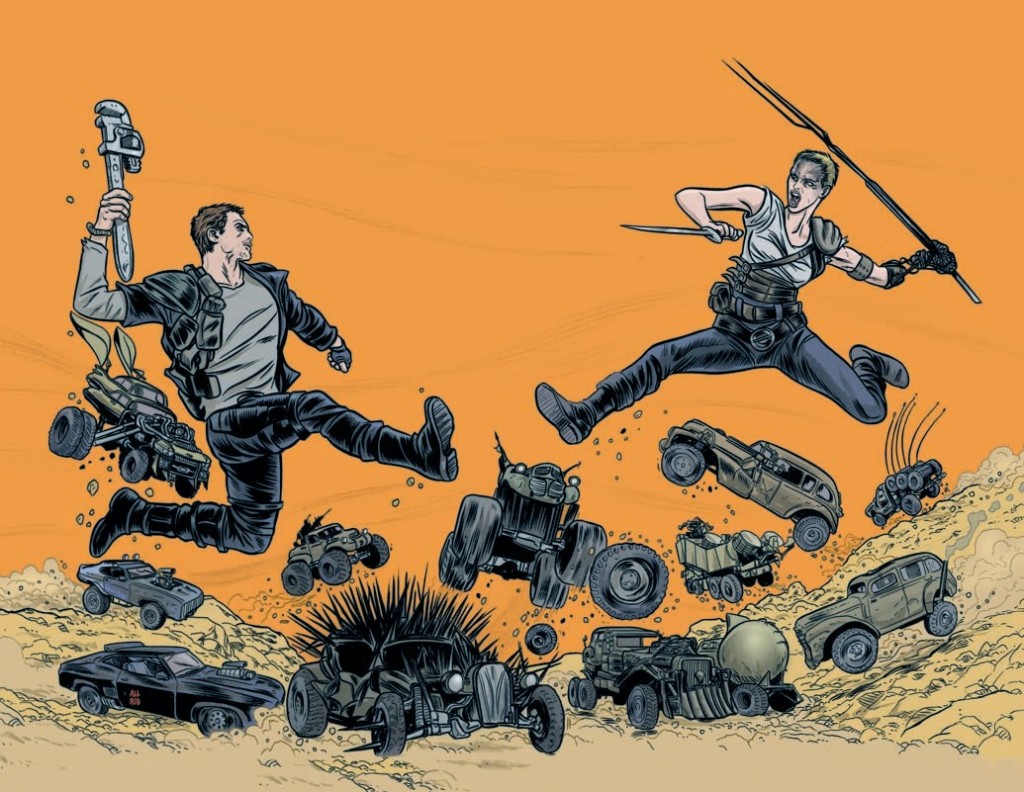 No film is above reproach. Not even MAD MAX: FURY ROAD.

We have seen an unparalleled amount of praise for George Miller’s newest film – both as an action film and as a mainstream feminist allegory – but even that praise has not been universal. Over the past few days, media theorists such as Anita Sarkeesian have taken FURY ROAD to task for its issues of representation and violence. These criticisms have served to offset some of the culture surrounding the film, reminding audiences that there are still ways in which FURY ROAD falls short. Some have countered these arguments by pointing out the conventions of post-apocalyptic genre; others have pointed out intelligent arguments in favor of the film from other notable feminist film theorists and supporters.

And while there are points to be made on either side of the argument, the discussion seems to focus on FURY ROAD’s qualities in a vacuum. I’d like to offer the following argument as a counter: that FURY ROAD should not be evaluated as a stand-alone representation of feminist film theory, but rather, as part of a developing catalogue of films that attempt to shift the way women are portrayed in mainstream, mass audience cinema.

As many film critics have noted, part of the success of FURY ROAD is due to its good timing. Miller’s magnum opus comes on the heels of the most recent AVENGERS film, where audiences were reminded that a multi-billion dollar film franchise struggles to find screen time for its only female character. Many of the criticisms of Scarlett Johansson’s Black Widow – that her story arc could be seen as reductive, focusing only on her inability to find romantic happiness and have lots of little assassin babies – highlight the need for a movie with Black Widow as the main character. Even the films that have tried to do more with Scarlett Johansson’s character have been handcuffed by her presence as a secondary character in someone else’s film. We need blockbusters where women are given equal weight in the narrative, and Miller’s film attempts to do this with screen time to spare. 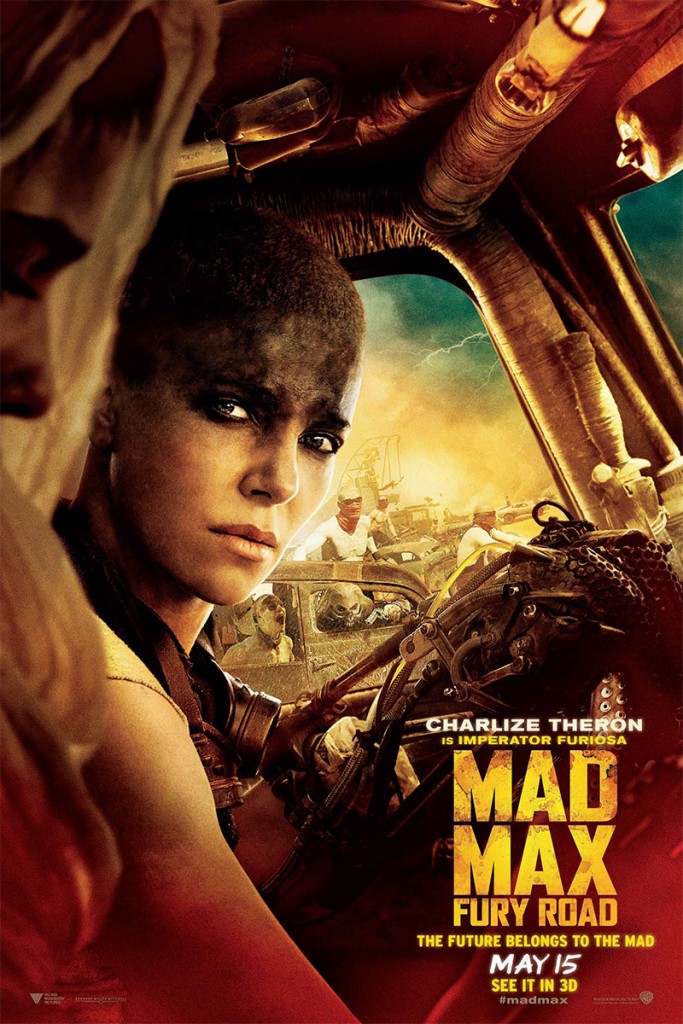 And if the timing of the film played a role in its reception, then the timing of the hype has to be a factor too. Many people who saw FURY ROAD over the weekend watched a film burdened with expectations of feminist greatness; had people had described FURY ROAD as a kick-ass action film without mentioning its feminist undertones, then perhaps the same people who describe the film as problematic would have found more to praise in Miller’s vision of the wasteland. Which isn’t to suggest that any criticisms of FURY ROAD are without merit; I’ve seen people discuss the lack of racial diversity in the film, and that makes a whole bunch of sense. I’ve also seen people point out that the dominant narrative of female empowerment seems to require women to begin as a victim – women can only be tough if they’ve lived through some form of trauma – and that, too, makes a helluva lot of sense. FURY ROAD is by no means the perfect feminist allegory; we had a full week of people praising the film as if it were the second coming of Christ, so it would be incredibly hypocritical of us to ignore the criticisms in the week that follows.

What has emerged from this criticism, however, is the idea that the film as a whole doesn’t progress the image of women in Hollywood. I can only speak for myself and my own desire for more female-driven cinema, but it seems that there is a danger in waiting for the silver bullet film that accounts for every possible perspective. Criticism of FURY ROAD as a counter-argument or a corrective to simplistic praise is wonderful. Throwing the baby out with the bathwater – describing FURY ROAD as a film that does more harm to feminism than good – seems to impede progress that would use FURY ROAD as a link in an ever-growing chain. Perhaps I’m sympathetic to the ways that one’s upbringing and geographic location can affect gender politics, but I just don’t see FURY ROAD as preaching to the choir. There are still many millions of people in this country – and around the world, where FURY ROAD continues to impress – who might not think of women as acceptable action stars, let alone as characters with no need for male protection. To say that FURY ROAD is feminist lip service seems to suggest that audiences are so unified as to be catered to. I wish that were the case. 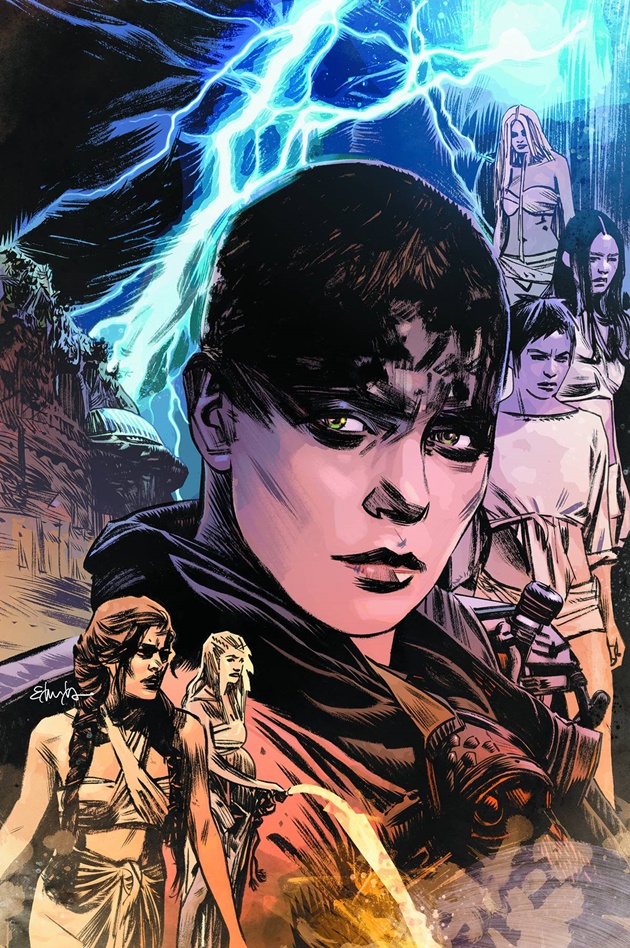 And that’s why it worries me sometimes that movies like FURY ROAD are subject to a closer degree of scrutiny than other genre fare. Every movie that features strong female protagonists encourages a nuanced debate over the merits of its feminism; this is great, and we shouldn’t pat ourselves on the back just because a female character in a movie announces that women are no longer objects. But progress needs to allow for modest successes and modest failures, and the only true way to enact change in Hollywood is to encourage the success of a movie that gets some of it right in the hope that the next movie will get more of it right. The secret to persuasion is to start in an area where there is some agreement between both parties. If we want to reach close-minded people, we start in a familiar environment and move them farther away from their own entrenched viewpoint. The idea that FURY ROAD single-handedly fixes anything is ludicrous; but the idea that it might open doors in the future for films that reach a little higher is not. Cultural change happens a little bit at a time, and if we handcuff every aspiring feminist film while watching two dozen traditional blockbusters sail by unchecked, we’re getting in the way of our own progress as a culture.

I do not mean to wag my finger at anyone who describes FURY ROAD as a non-feminist film. Even if it were my place to do so – and it is oh-so definitely not – there are a lot of persuasive arguments being made about the ways FURY ROAD might let down its intended audience. What I do hope to say, though, is that this is the kind of film that I would find persuasive if I were fourteen years old and trying to engage with cinema for the first time. And if I grew up thinking that a certain type of gender representation was the norm, then perhaps FURY ROAD might, at least, chip away at that world-view a little bit at a time. The more films like FURY ROAD and PITCH PERFECT 2 get made and seen, the more we can mark our progress as part of a straight line rather than a series of barely connected dots.