MEN IN WAR is a 1957 film directed by Anthony Mann, from a script by Philip Yordan which was adapted from a novel by someone named Van Van Praag (awesome).  Even though the majority of movies of the era were being shot in Technicolor, MEN IN WAR is in black and white.  I wonder if that was a budgetary issue, an aesthetic decision, or something else.  I’d be projecting, as I haven’t been able to dig up an answer to that question just yet, but there is something to the idea that black and white is a more fitting format for this story.  It’s less Hollywood-idyllic, and more stark and unforgiving.  There’s redemption in it, but not in a sweeping, overstated way.  It’s an unabashed tribute to the American military, but an appropriately business-like one.  The score by Elmer Bernstein is typically right on-point to the movie’s aims.  It’s lovely and effective music, and outside of the title song (whose lyrics are a little too on-the-nose to ever play by today’s standards), it’s as relevant still as the rest of the movie is.

MEN IN WAR stars Robert Ryan and Aldo Ray, two of the most underrated movie stars of the 1940s and 1950s, and two of my all-time favorites.  Ryan is the dark figure with the world-weary eyes and fighter’s frame who is best known by today’s audiences, if at all, from his small ‘heel’ role in THE DIRTY DOZEN.  His career was much longer and more diverse and distinguished than that one role, and really this is an actor long overdue for a major rediscovery.

Aldo Ray, for his part, is possibly even less well-remembered today, although the reasons why are hard to understand.  (It may have something to do with the apparently sad later years.)  At his peak, Ray had an appealing, gravel-gargling voice and an every-day tough-guy manner that are enormously charismatic.  I can’t help but think of Michael Chiklis when I think of Aldo Ray, although Quentin Tarantino thought of Brad Pitt.  (Pitt’s character in INGLOURIOUS BASTERDS, Aldo Raine, is a direct tribute to this iconoclastic actor.)  Ray also didn’t have the broadest filmography, having not appeared in as many memorable films as he probably deserved to have.  Remind me to write up a nifty film noir called NIGHTFALL that Aldo Ray starred in, the same year as MEN IN WAR.   Generally Ray played scrappy tough guys, outsiders with big mouths and big attitudes.  That’s what he plays here.

MEN IN WAR takes place on a very specific date: September 6th 1950.   It takes place during the Korean War, which is interesting, because in 1957 that wasn’t too far in the past.  Just as historically interesting, both Robert Ryan and Aldo Ray served during World War II, Ray having seen action in Japan.  One has to imagine that this added to the naturalistic performances that this movie displays, something of a hallmark of Anthony Mann’s films.

Ryan plays a beleaguered lieutenant, Benson, whose forces have been diminished and separated from any communication with the rest of the American presence in Korea.  He needs to get his men to safety, and they’re already beginning to fall apart.  Vic Morrow (now best known as Jennifer Jason Leigh’s dad) makes a strong impression as a shell-shocked young soldier.  So does James Edwards as Sergeant Killan, a kind-hearted African-American G.I. who is a friend to Morrow’s character and, unfortunately, due to cinematic conventions, doomed.  The scene where Killan stops in a clearing to decorate his helmet with the wildflowers he finds, ending as it does with his silent murder by encroaching commandos, is one of the movie’s most striking images.

Aldo Ray enters the movie in a Jeep, carrying his commanding officer alongside him, even though the colonel has been rendered mute by minefire and, presumably, having witnessed too much carnage.  Ray’s character identifies himself only as Montana, a rambunctious and headstrong G.I. who is fed up with battle and only cares to get his colonel to safety.  Ryan’s character wants to requisition the Jeep, and Montana’s services, in order to press on with his diminished forces.  Ray’s character, even out-ranked as he is, resists every step of the way.  The movie centers around the conflict between the two men.

It’s a vivid conflict, and it’s profoundly effective, enacted as it is by two such charismatic actors.  The appeal of Ryan and Ray is very different, but equally potent.  Ryan, so often a convincing heavy but in this case allowed to play the kind of role here that his obvious real-life decency fits like a glove, is a quieter, sterner kind of a good guy.  Ray is the more quintessentially American character, brash and arrogant — although you also see his point.  The main question of the movie is about what is the right thing to do in the chaos of war, to look out for self or to fight as part of the unit, even if the latter seems hopeless.  It’s not exactly as if Montana is being selfish — he seems to care about his Colonel as much as, if not more than, himself.  But ultimately, as pro-military as this movie is, Montana must come to understand and embrace Benson’s all-for-one ethos.  That the movie brings us, the audience, to see things the same way, and to appreciate the very real heroism of the men who fight our battles for us overseas, is why it is still a captivating piece of work today, and obviously still just as relevant.  There can be no doubt that Steven Spielberg saw this movie before making SAVING PRIVATE RYAN.

MEN IN WAR is a little more ambiguous than that much more recent film, but it is just as effective at approximating the senses and textures of battle — an amazing feat, for a movie fifty years old. MEN IN WAR is not very bombastic at all for an American war movie, and maybe that’s why it’s one of the better ones Hollywood ever made. There are scenes and images here that are simply unforgettable, unshakeable, poetic and sad and resolutely effective. MEN IN WAR doesn’t play at being an epic, nor is it out to thrill you. It has still-potent things to say about war and violence and the futile mechanics of both, and it says them with uncommon grace and quietude. This being Memorial Day Weekend, if you’re looking for an appropriate movie to mark the occasion and to spark reflection, please consider this one.

MEN IN WAR is on Blu-Ray — order it here: 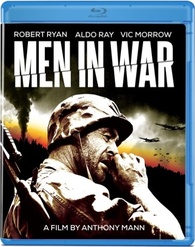