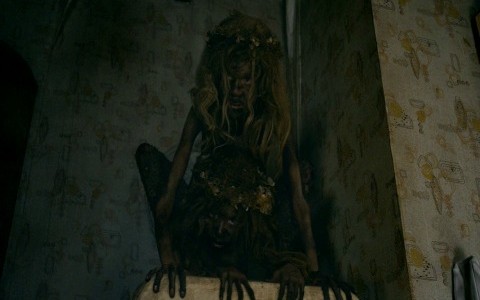 “HORROR AT ITS BEST”

MAMA is the haunting tale of two little girls who vanish without a trace from their suburban neighborhood the day that their parents were killed. But when the young sisters are found alive years later in a decrepit cabin, their uncle (Coster-Waldau) and his girlfriend, Annabel (Chastain), take them in. As they try to introduce the children to a normal life, Annabel begins to wonder if the traumatized girls are the only guests they have welcomed into their home or if someone or something still wants to come tuck them in at night.

The Blu-ray™ Combo Pack allows fans to watch MAMA anytime, anywhere on the device of their choice.  It includes a Blu-ray™ disc, a DVD, a Digital Copy and UltraViolet™ for the ultimate, complete viewing experience.

Rating:  Rated PG-13 – For violence and terror, some disturbing images and theatrical elements

Rating:  Rated PG-13 – For violence and terror, some disturbing images and theatrical elements