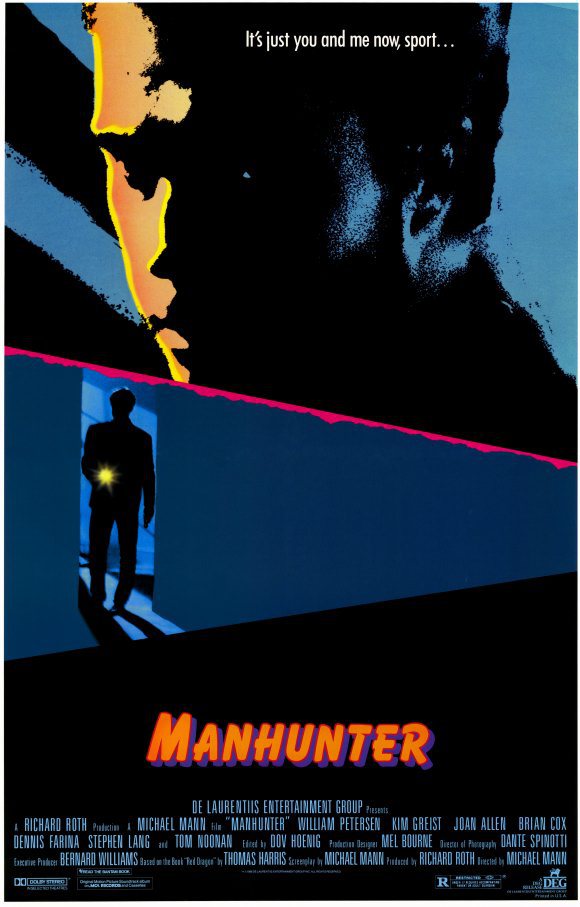 Some movies get themselves in your bloodstream. I have to believe it’s a chemical thing. It’s the way you’re born and the way they’re made. Astrology, or some shit. The tides. 1986’s MANHUNTER, written and directed by Michael Mann, is all of that for me. I don’t know why. Maybe I don’t want to. All of Mann’s movies to date are that kind of personal for me, but we’re working in the specific at the moment. MANHUNTER is a feature adaptation of the novel Red Dragon by Thomas Harris, as rigorously researched and emphatically delivered as anything Mann has ever done.

Serial-killer thrillers are a dime a dozen, or a penny a ton — what else is the soulless, worthless, irresponsible mega-hit TV series  Criminal Minds, to name one example, except a rehash of the plot of MANHUNTER, literally, over and over again? The difference is in the sincerity. Michael Mann means it more than almost any other filmmaker. MANHUNTER means it more than any other serial-killer thriller. I love Jonathan Demme, but SILENCE OF THE LAMBS can’t touch MANHUNTER, for me. I love Mads Mikkelsen, but Hannibal can’t touch MANHUNTER, for me. There have been excellent adaptations of the same material and there have been some I won’t mention, but this is the one I continue to return to again and again, the one that reveals more with every viewing.

MANHUNTER is being re-released to Blu-Ray today in a collector’s edition courtesy of Scream Factory. I could write about this movie all day, from a variety of angles, but here’s something I wrote about one of its characters back when Daily Grindhouse did our list of the Top 50 Movie Characters Of All Time: 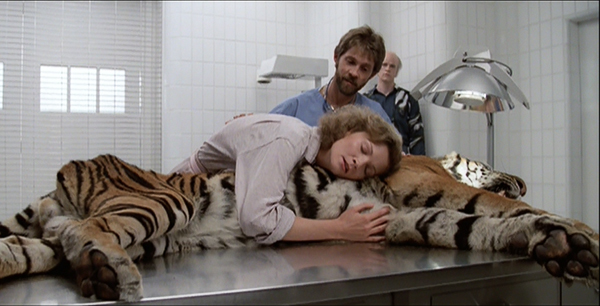 The man lurks in the background. He might never stand out in a crowd, aside from his looming height and his jacked-up lip. To look at him, you might never know what he’s becoming.

Francis Dolarhyde is one of the screen’s scariest monsters, and one of the most under-acknowledged. MANHUNTER is the lesser-known Hannibal Lecter movie, and even when it is talked about, the conversation goes first to Brian Cox’s [brilliant, superior] performance as Hannibal Lecter, who only has a handful of scenes.

Francis Dolarhyde, not Lecter, is the co-headliner. He’s an unknown quantity for half the film, which centers around the attempts of Will Graham (William Petersen) and Jack Crawford (Dennis Farina) to find the serial killer who periodically massacres families based around the cycles of the moon. Halfway through the film, Dolarhyde hijacks the narrative, and what was initially a superlative serial-killer thriller becomes one of the 1980s’ oddest character studies.

The masked, tattooed super-murderer known as The Tooth Fairy turns out to also be a soft-spoken employee of a film-development lab, enamored with a blind co-worker (Joan Allen). MANHUNTER‘s brilliance, and that of the supremely under-recognized character actor Tom Noonan, is in the way the audience comes to know the movie’s primary fiend in a strange and affecting way. Remember this is a man who we know has slaughtered children in front of their parents, and now, somehow, we’re involved in his romantic world. We’re disappointed, as is he in himself, to watch him shrug off his humanity and resume his monstrous life’s-work. The film’s horror and its beauty become intertwined, uncomfortably, and only a shockingly violent denouement will disentangle them again. 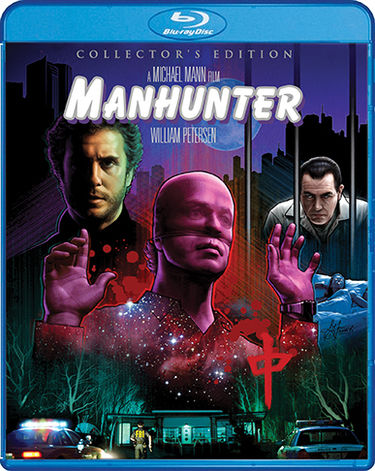 MANHUNTER is available on Blu-Ray as of today from Scream Factory. This is very important. It’s got all kinds of extras, most notably new interviews with cast and crew, and most importantly, the movie itself, both the theatrical cut in its original aspect ratio, and also the director’s cut, as God and Mann and Blake and Lecktor intended. Guess I’m buying this movie again.