Paintball is the ultimate in life or death, at least that’s what Master Blaster taught me. I’m never going in the woods again because of it. OH SHIT, I LIVE IN THE WOODS! Any minute now some hick with a shotgun or some ninja or some madman is gonna break my door down and pour acid on my face. I’ll never sleep again, got my machete at the ready. Any asshole tries to get in here I’ll have their skull. OH SHIT someone’s knocking on my door! Shhh be quiet I’m gonna let ol’ slicey go see who it is. TAKE THAT!!!

Uh…It was my landlord…funeral services will be held at Our Lady of the Infernal Beast at 1 pm. Closed casket. 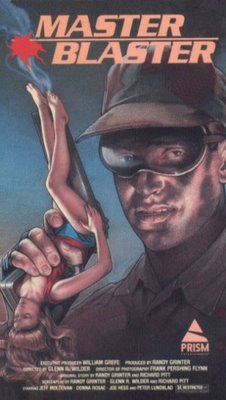 Back to reality, Master Blaster is the story of several of the top level Paintballers getting together for the national championship (aka The Master Blaster). The story starts with competitors making their trek to the woods where the Blast will take place. The big Italian guy pretends to assassinate a car full of rowdy teens, the one he shoots in the head is especially gruesome (it is just a paintball). Our main character Jeremy Hawk along with the token Hispanics Monk and Snake as well as the female cop all seem to find themselves at the same little hick bar. The latter just in time to watch Hawk kick the shit out of three big mean hillbillies. Hawk is rewarded the best way a hick can reward you, with Deer jerky!

When they get to The Master Blaster we’re treated to an impromptu roast from the head judge, who cracks wise about each contestant before moving on to the next. There’s; Link (the token black), Mr. Yamada (token Asian), three hicks with clichéd names, a Rock Star named Lewis (token Rock Star named Lewis), Hawk, Monk, Snake, an old guy, a couple ladies and a Lawyer named Stark who pussies out the second he hears the word “booby trap”. A man afraid of boobies is NOT to be trusted! Stark storms out with an ominous warning, but I’ll spoil this for you, you never see him again…or do you?

What starts off as a fun game of paintball turns deadly when a maniac starts chopping people down. The body count starts to rise and suspicions start to flare, before long everyone thinks it’s Hawk because he’s the only good paintballer. Hawk on the other hand thinks it’s the big Italian because he actually bothers to do some research and finds a tin opener from the military rations he was eating. Due to a few well placed red herrings the truth is pretty well kept until it’s revealed and I’m not about to ruin that for you here.

So come for the paintball and stay for Snake getting shot in his “pinga.” A guaranteed good time for all so sip, gulp or chug that brew and  laugh at the hicks struggling to comprehend a well spoken black man.

5 painted pingas out of 5