MOE HIDES FROM THE RETRIEVERS

What’s the deal with secret military groups? Always training non stop in the backyard of some big mansion. Secretly kidnapping former members who try to publish a book about their secret dealings. Breaking into little girls birthday parties and killing their guests. I mean seriously, what is their deal? I’m glad anyone made it out alive from my unfortunate 7th birthday party, no one can resist the draw of a cold pool on a hot July weekend. Poor grandma, I miss her more and more every day. Shot right through the head. 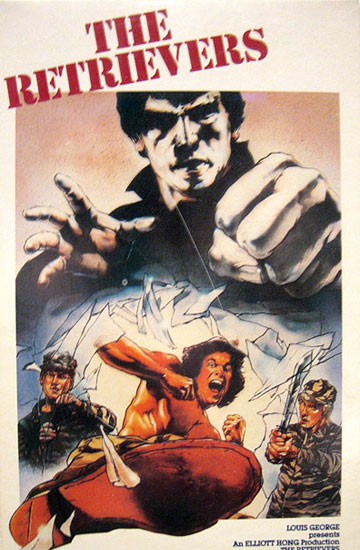 The Retrievers is just such a story. Danny is a former member of a secret para military group called the retrievers (aka The Company). He got out of the life and wrote a tell all book and now the retrievers are out to retrieve him, with GUNS! Danny hides out at his mother’s house where he shows the book to his little sister. She has the same look that everyone who reads the book in this movie has, pure unadulterated disgust. The Company must be doing some seriously dirty shit. It’s that point that reminds me to say how much I love VHS boxes (if you haven’t guessed that already) the box sells The Retrievers as a KILL SQUAD type movie with a group of ex military looking to seek revenge on some baddie. Nope! The Retrievers ARE the bad guys. The movie should have been called “Revenge on the Retrievers” or “The Retriever’s Comeuppance” or something like that.

But Danny goes and gets himself caught by The Company and they torture him with needles under the fingernails. It’s not particularly graphic, especially since they just got done showing Danny’s Mom getting blown the fuck away! The Company discovers that the little sister is most likely who has the book and send out a crew to bring her in. Tom is a new guy with The Retrievers so it’s his job to get the girl to prove his loyalty. Tom is not even remotely loyal because he turns his gun on his partner and saves the girl. The next forty minutes of the movie is people getting the jump on each other. It got to the point where it was a joke.

“Oh look this guy just went through a door, how much you wanna bet someone will be waiting for him in there?”

“No bet, we already KNOW there’s gonna be a guy there”

In fact, it was more surprising when there WASN’T a guy waiting. The one break we get from the pissing contest was an oddly timed, very oddly placed LOVE MONTAGE! Tom and Danny’s sister fall in love with each other for no reason whatsoever! Her brother Danny’s stuck in a horrible hostage situation, pretending to kill himself to get the jump on his idiotic guard. Only to have his ass handed to him by the “drill sergeant” (for lack of a better term) who looks just like that one douchebag you went to high school with who always had the perfect hair. You know the one I’m talking about. So both Danny and Sissy are getting fucked, just in very different ways.

Tom and Janice(the sister) find a sleazy book publisher known for her willingness to print anything and they get a run of the book made not knowing if Danny was alive, but fearing he’d been killed. Tom decides to bring the fight to The Company and see if Danny is still alive. The movies comes to a brutal head of violence and action that makes the dull moments from the rest of the film worthwhile. Is The Retrievers a great movie? Nah! But it’s a fun movie that makes little sense and has some pretty good fight scenes and a guy who gets stuck like a pin cushion with Chinese throwing stars! Could you ask for anything more?

3 Nonsensical Love Montages out of 5