Paul Verhoeven is a filmmaker who is keenly aware of his divisive reputation. Even in less controversial films like ROBOCOP, TOTAL RECALL, or STARSHIP TROOPERS, his sarcastic approach to attacking the jingoism and bloodlust of action films has often been misinterpreted as simply an obsession with violence. Even more troublesome to some people is the way he has portrayed sexually assertive women in an exaggeratedly predatory manner to achieve queasy comedy in BASIC INSTINCT, SHOWGIRLS, and THE FOURTH MAN.

I have always believed that Verhoeven was trying to hold up a mirror to the audience, to show them their baser desires to achieve comedic ends. But I cannot deny that he sometimes takes the joke too far. Even to a Verhoeven apologist like myself, the rapist subplot in SHOWGIRLS was a massive problem. And there is no denying that he seems to actually enjoy the same elements of gratuitous sex and violence that he is parodying with a straight face. Honestly, given the amount of controversy and protests his films have received, he has gotten away with having his cake and eating it too more often than not.

I guess I should not be surprised then that Verhoeven has decided to push his luck with ELLE, a darkly comic riff on the rape-revenge genre that is as ironic, occasionally grotesque, and deadpan as you would expect from the controversial filmmaker. Surprisingly, given the premise, it is not nearly as problematic in execution as you might expect. 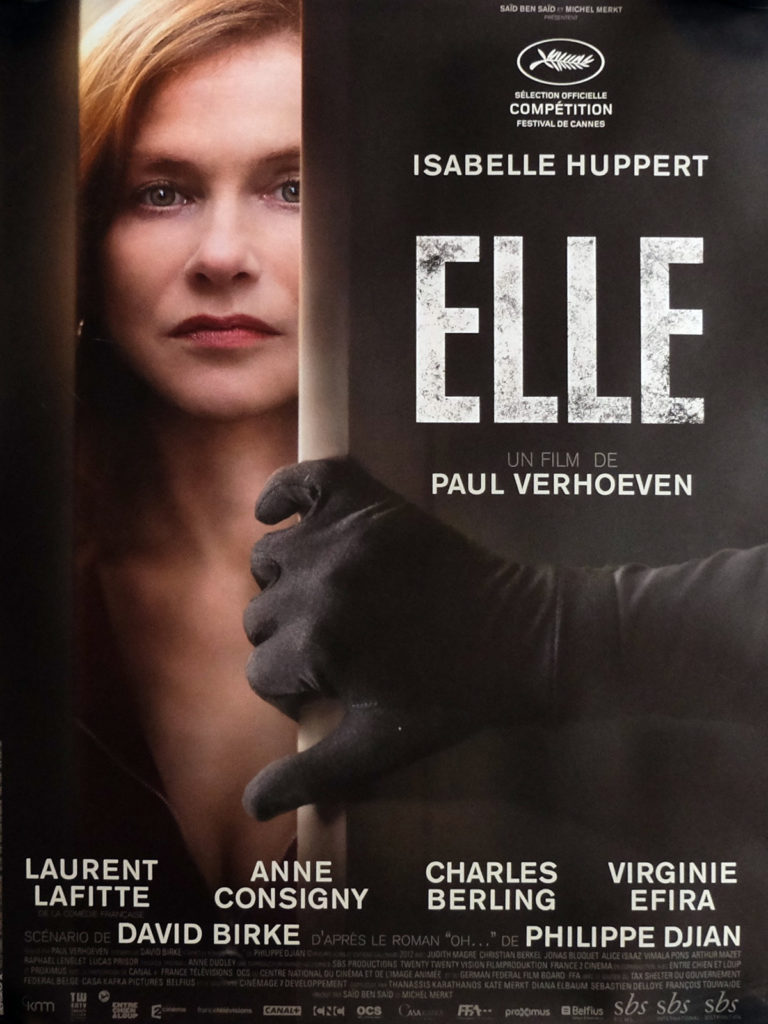 The movie opens as a masked rapist finishes his sexual assault on Michèle (Isabelle Huppert). After escaping through the back door, the rapist disappears. Instead of calling the police or going to the hospital, Michèle calmly cleans up the broken vase and overturned furniture in her home, visits her doctor for a STD test, and returns to her job as owner of a video game production company. Eventually, she tells the news to her ex-husband Richard (Charles Berling), friend and business partner Anna (Anne Consigny), and Robert (Christian Berkel), Anna’s husband, who she just happens to be having an affair with. It is during their stunned reactions that we learn why Michèle distrusts the police and decided not to report the rape.

The reason for Michèle’s distrust of the police is best revealed by the film since the plot and character developments are so intertwined with potential spoilers. And that is what is so interesting and entertaining about ELLE. It unfolds like a fun, slightly trashy novel that gives a lot of room for the supporting characters to breathe, fleshing out Michèle’s world beyond just her search for the rapist. But nearly all of the plot threads, if talked about, could lead to giving too much away about the central conflict. Honestly, I did not realize just how intricately plotted the film was until I started writing this review and discovered how little of the story set up could be written about.

While Verhoeven has fun with the various subplots that veer from farcical to soap opera-like, he never plays the main story for comedy. Michèle has a good reason for not trusting the police and fantasizes about a different way her assault could have gone where she grabs hold of a heavy ashtray and bashes in the attacker’s skull. The only real point where the film takes its central plot into queasy territory is a revelation halfway through the film. I could understand why some viewers and critics might take offense and not stick with the film beyond that point, but believe me when I say that—through some miracle of storytelling—Verhoeven actually brings the film to a point where the twist makes thematic sense and uses what is sure to be a controversial idea to bring the various subplots into a cohesive whole. 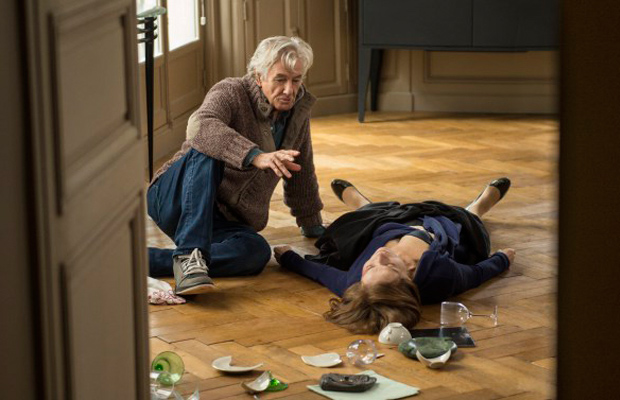 Of course, it is not really a miracle that allows Verhoeven to get away with such a tricky plot twist. It helps that he has maybe the greatest living actress in Huppert bringing Michèle to life. Never asking for audience sympathy for what has happened to her or forgiveness for treating some of her friends and family poorly, Huppert’s Michèle is simply a tough woman who has dealt with more than her fair share of trauma. She gets through issues that would break lesser people with a mixture of grit, self-deprecating humor, exasperation with others, and a deep well of understanding that everyone actually is doing their best to get through life. Michèle’s flaws and traumas have made her a more empathetic person and Huppert’s performance captures all the pain and humor that makes her one of the most well rounded characters I have seen in a film in a very long time. She is not a saint. She is not a martyr. She is not a villain. She is not a victim. She is simply another person doing her best and not always succeeding.

Given how restrained much of the film is, it is sometimes hard to believe that Verhoeven in the director behind it, but his touches comes through. The mid-movie twist has his fingerprints all over it. A subplot about the violent and sexually-explicit video game Michèle’s company is making gives Verhoeven a chance to indulge in some grotesque imagery (and comment on sexism within that industry as the young men who work for Michèle resent having to take orders from a woman). And when there is onscreen violence, it tends to be bloodier than is realistic. But overall, Verhoeven seems to be using a lighter touch and is more interested in how people choose to take charge of their lives or let themselves become victims.

At its heart, ELLE is a nuanced character study. Of course, Verhoeven cloaks that character study in the guise of a thriller where a woman buys a hatchet and patiently waits for the man who sexually assaulted her to try it again. So maybe he has not mellowed that much. In all seriousness, I would not want him to. 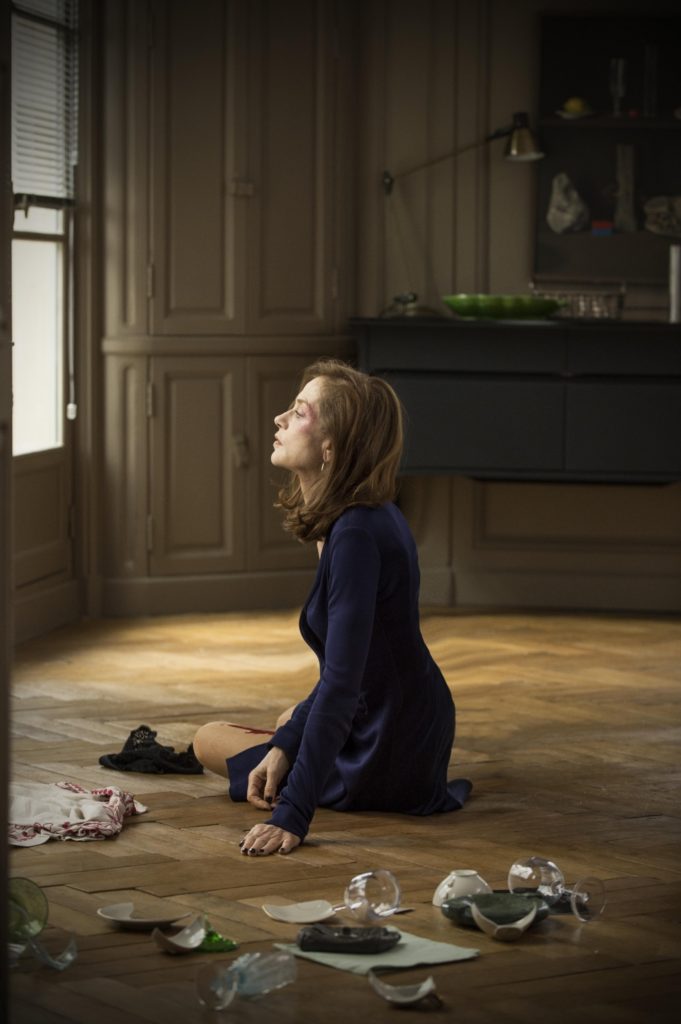