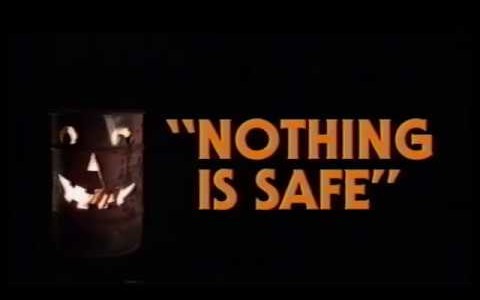 clipping. is something of a supergroup that has exploded onto the music scene. Comprised of William Hutson (composer of ROOM 237), Jonathan Snipes (also ROOM 237, STARRY EYES, and TRESPASSERS), and rapper/actor Daveed Diggs (Hamilton, VELVET BUZZSAW), the trio put out bold new tracks combining disparate instruments, variety of musical influences, and propulsive lyrics. The first single off their upcoming album, There Existed An Addiction To Blood (out October 18), is “Nothing Is Safe.” In conjunction with the release, they made a lyric video that channels the opening titles of John Carpenter’s first two HALLOWEEN films while adding a bunch of VHS distortion, Oompa-Loompa like text animation, and an increasingly creepy vibe. Most lyric videos are pretty dull, but clipping. manages to inject

Be sure to pre-order the album or pick it up when it’s released on October 18 from Sub-Pop Records. The previous work from the group was more sci-fi oriented, but There Existed An Addiction To Blood promises to be a throwback to ’90s Horrorcore outfits like Gravediggaz and Geto Boys. Until the album drops, please enjoy this suitably spooky video for a song that grows with intensity. It’s a safe bet that horror studios are scrambling to be the first to include this track in a trailer for one of their upcoming films—and if they aren’t, then they are missing out big time.