Home invasion films are now a pretty common staple of the horror genre. Since the ’60s, there has been an almost cyclical nature of the popularity of these movies, with some stone cold classics popping up in each resurgence. STRAW DOGS, THE STRANGERS, ALONE IN THE DARK, ILS, FUNNY GAMES, PANIC ROOM, WAIT UNTIL DARK, YOU’RE NEXT, INSIDE, and many more have proven the versatility of the subgenre and how much tension and fear can be squeezed from a very straightforward premise. And it is a very basic concept (no matter how convoluted the plot or attempts at playing with the format), because it is a basic and shared fear for pretty much everyone: what if the one place that is safe for you is no longer safe? 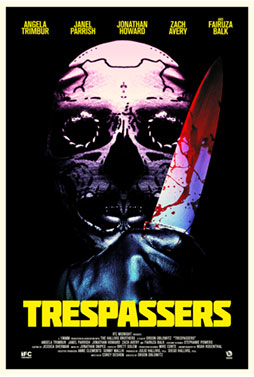 This has been used as a jumping-off point for metaphors around various military campaigns, terrorism, masculinity, blood lust of audiences, and more; seizing on the zeitgeist to take distant headlines and generalized fears and filter them into something immediately resonant with viewers. It’s very easy for audiences to see themselves in these pictures, and therefore fertile ground to spook them further. TRESPASSERS, from director Orson Oblowitz and writer Corey Deshon, revolves around unsuspecting people being preyed upon in an isolated AirBnB, with elements of THE STRANGERS and THE DESCENT swirling amidst strong performances and impressive style. It isn’t a new classic of the subgenre, but it’s a solid film that handles pacing fairly well and is not a bad way to spend one’s time. 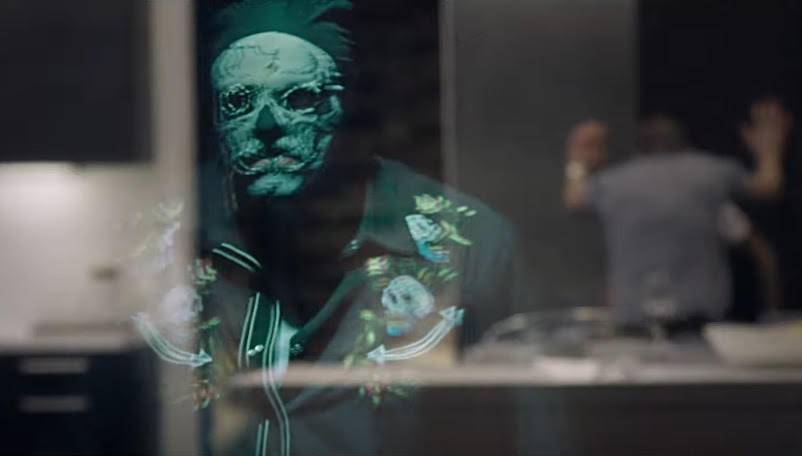 TRESPASSERS opens with a trio of masked men driving into the desert to kill a man and a woman who beg for their lives. The film moves on to Sarah (Angela Trimbur) and her husband, Joseph (Zach Avery), arriving at an isolated rental home in the Mojave Desert. While the couple are clearly dealing with some unspoken issues, they are soon joined by Sarah’s childhood friend, Estelle (Janel Parrish), and her prick of a boyfriend, Victor (Jonathan Howard). Soon there’s drinking and drugs and awkward conversations and bad jokes as the foursome enjoy their getaway. A woman (Fairuza Balk) knocks on the door, claiming to be a neighbor of the house’s owners and needs to use the phone to let her babysitter know she will be late getting home. Coke-fueled suspicions race as the group begins fighting each other and the woman’s motives remain unclear. Secrets and people’s true selves are revealed—all while the executioners from the beginning linger on the brain.

The latest film from director Oblowitz (THE QUEEN OF HOLLYWOOD BOULEVARD), TRESPASSERS isn’t revolutionary in any particular way to the sub-genre. However, working with cinematographer Noah Rosenthal, there is a fair amount of style injected to the proceedings. Switching between antiseptic white spaces lit by harsh fluorescents, to the vast emptiness of the desert at night, to moody neon-soaked scenes creates a nice sense of different environments that effectively increases the tension and sense of incongruity between the safety of home and the horror of the situation unfolding. Composer Jonathan Snipes (ROOM 237, STARRY EYES) contributes an electronic score mostly comprised of ominous tones that adds to that feeling of slowly detaching from reality to plummet into the ultimate nightmare. These stylistic choices combine in a way that’s reminiscent of Nicolas Winding Refn, if he weren’t a Danish alien.

In addition to the audio and visual flourishes that Oblowitz employs, there’s also some very strong performances and clever twists in the script by Corey Deshon. It’s fascinating to see Angela Trimbur blossom as an actress; the first time she was seen by an audience was on MTV’s Road Rules. Since then she has appeared in Rob Zombie’s HALLOWEEN II and THE FINAL GIRLS, among other projects, and delivers increasingly impressive performances. In TRESPASSERS, she has to be the emotional center of the film — the person most vulnerable, due to a recent tragedy, but also the person who must discover her inner strength. As Sarah, she delivers surprisingly complex emotional scenes that run a full gamut of feelings and does so in incredibly believable fashion. Balk (THE CRAFT) is also perfectly cast coming off as a sweet older woman, but with that worrisome intensity that never leaves her eyes that adds to the mystery of her role in everything. Carlo Rota (SAW V) shines as a police officer responding late in the film to the horrible situations unfolding; proving to be equal parts charming and menacing depending on how he’s approaching each member of the household. 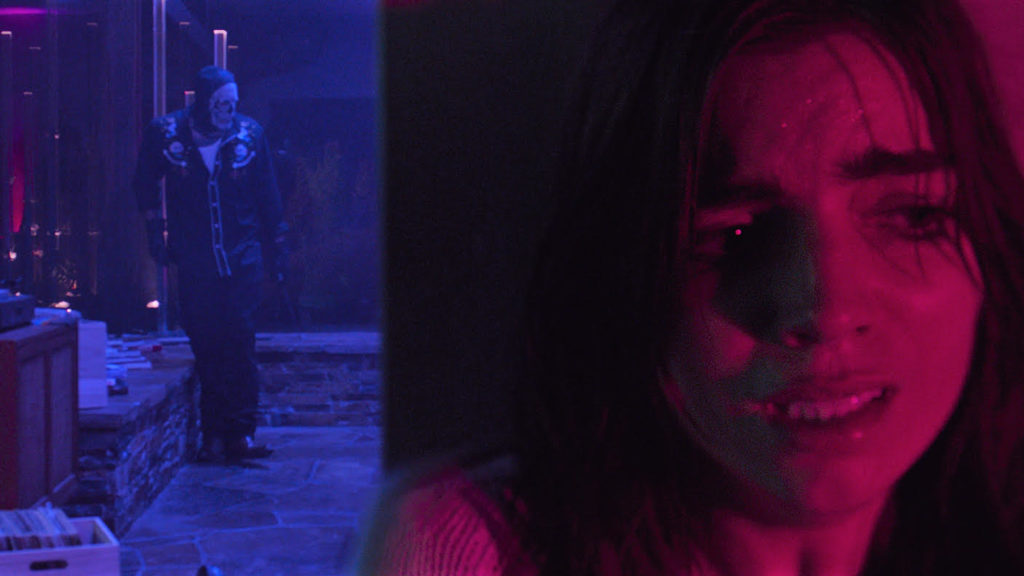 TRESPASSERS isn’t perfect, of course. The fact that there’s so much animosity between everyone and that Victor is such a dick can really grate on the nerves; it’s a throwback to those slasher films where audiences are supposed to root for the deaths of assholes. There are not a lot of sympathetic elements to his character, which seems awkward and unrealistic, but his churlish ways do help crank up the situation to escalating heights of frenzy. Another issue is one of timing—as mentioned before, there’s often a correlation between home invasion movies and political topics. Whether it’s the fallout of the Flower Children in Manson-esque massacres, or fears of another terrorist attack, or a sense of losing one’s community, it’s not very hard to see these feels as allegories for their times. Which is what makes the use of the ostensibly Mexican assailants so tone-deaf. The trio are Soldado-types, listening to narcocorridos and probably worshipping Nuestra Señora de al Santa Muerte in their capacity as the boogeymen of the border. At a time when xenophobia for Latinx people is being stoked, it seems like an unnecessary step to invoke those types of fears. Though, to the film’s credit, there is a sense that there is as much wrong inside the house as there is prowling around its outskirts.

Home invasion movies, done well, will always resonate with viewers because it is the most basic violation. The place where one can be oneself, away from the world, is disrupted and disturbed by others; and if one’s home isn’t safe, then where is? As a character says in TRESPASSERS, “There’s no moral order. There’s just this: can my violence conquer yours?” It’s a primal fear that probably goes back to cave dwelling and forces the mask of civilization to sleep in order to unleash something much more unhinged and destructive. While the film probably won’t join the ranks of other classics in growing category, it still has a strong sense of style and solid performances that make it enjoyable and may inspire some people to check their locks a few more times than usual.