RED RIVER was released on this date back all the way back in 1948! Here’s what I wrote about it back when Criterion put it out on Blu-Ray: 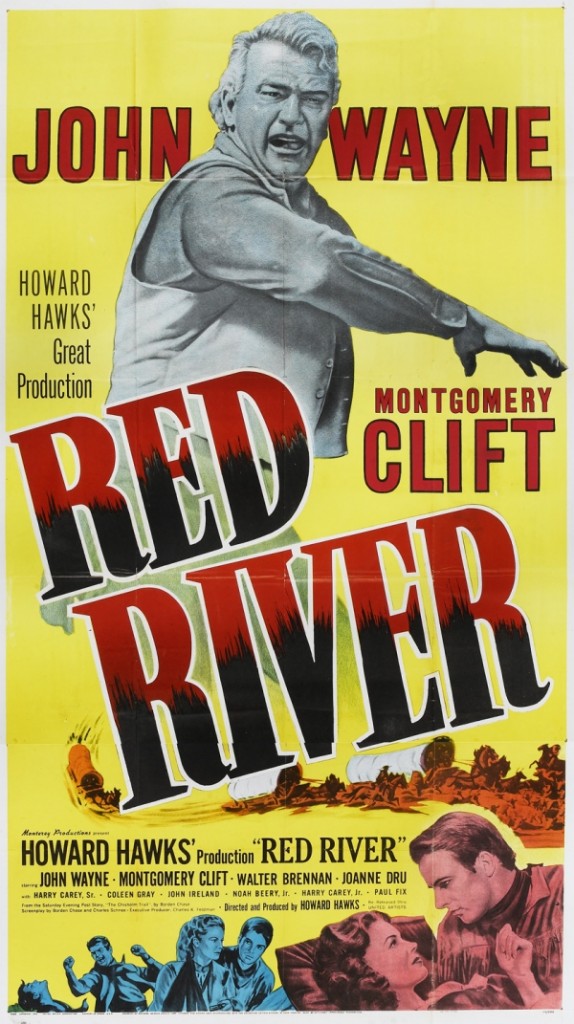 The critical consensus considers John Ford and Howard Hawks to be the two film directors who essentially created the popular notion of “John Wayne,” the man born Marion Morrison who became one of the most iconic American movie stars in the lifetime of the medium, in some ways the quintessential American movie star. He may not be your favorite movie star and he isn’t mine, but John Wayne more than any other one star displays America the way America has always seen itself, and the way the rest of the world sees us — upright, noble, mannered, bullish, loud, confident, decisive, and pitiless. 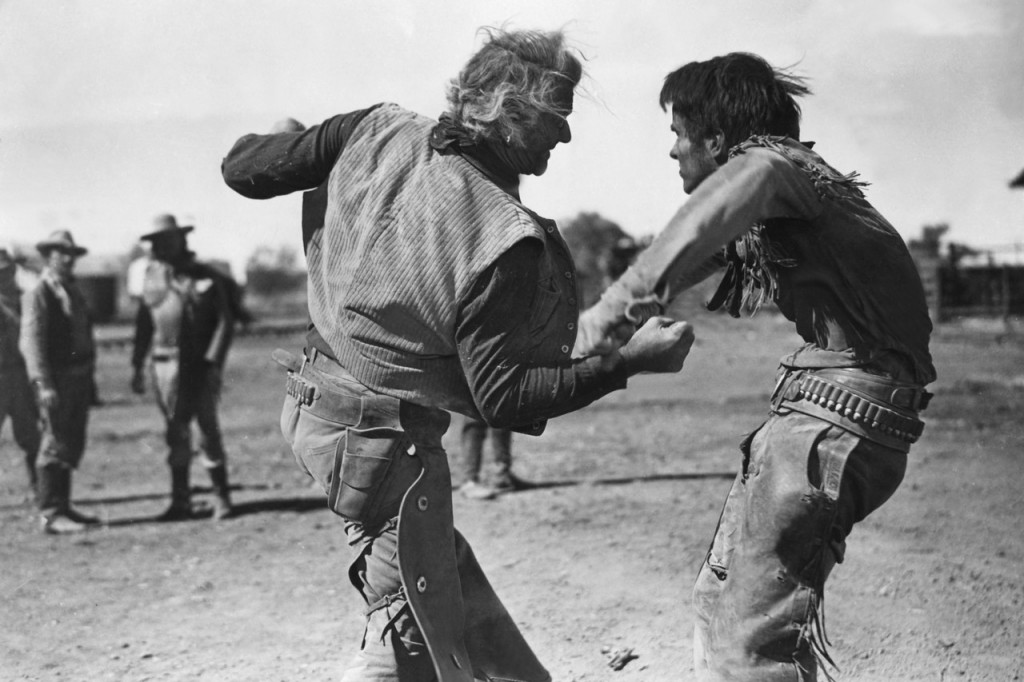 It was Raoul Walsh who gave Wayne his first lead role, but it was Ford who — with 1939’s STAGECOACH — made him a star. Ford made twice as many films with Wayne than Hawks did, necessary Wayne films including THE SEARCHERS and THE MAN WHO SHOT LIBERTY VALANCE, but Hawks was no less crucial in filling in the John Wayne persona. Of the handful of films Hawks made with Wayne — RED RIVER, RIO BRAVO, HATARI!, EL DORADO, and RIO LOBO (Hawks’ final film) — the first two are the most essential. One of the great genre renaissance men in cinema history, Hawks could shoot any genre of film he attempted. Though his films with Wayne were almost all Westerns, Hawks still mixed things up by pairing the stolid Wayne with younger stars and atypical performers. Ford also frequently had Wayne spar with younger foils, for example John Agar and Jeffrey Hunter, but those younger actors were a different sort of challenge. RED RIVER‘s Montgomery Clift was a significant sex symbol, and more importantly, a method actor, whose stage training made him a different kind of performer than Wayne, a product of movies from the start. RIO BRAVO was arguably even more intriguing and eclectic, throwing a pair of pop stars at Wayne, but that’s another story. 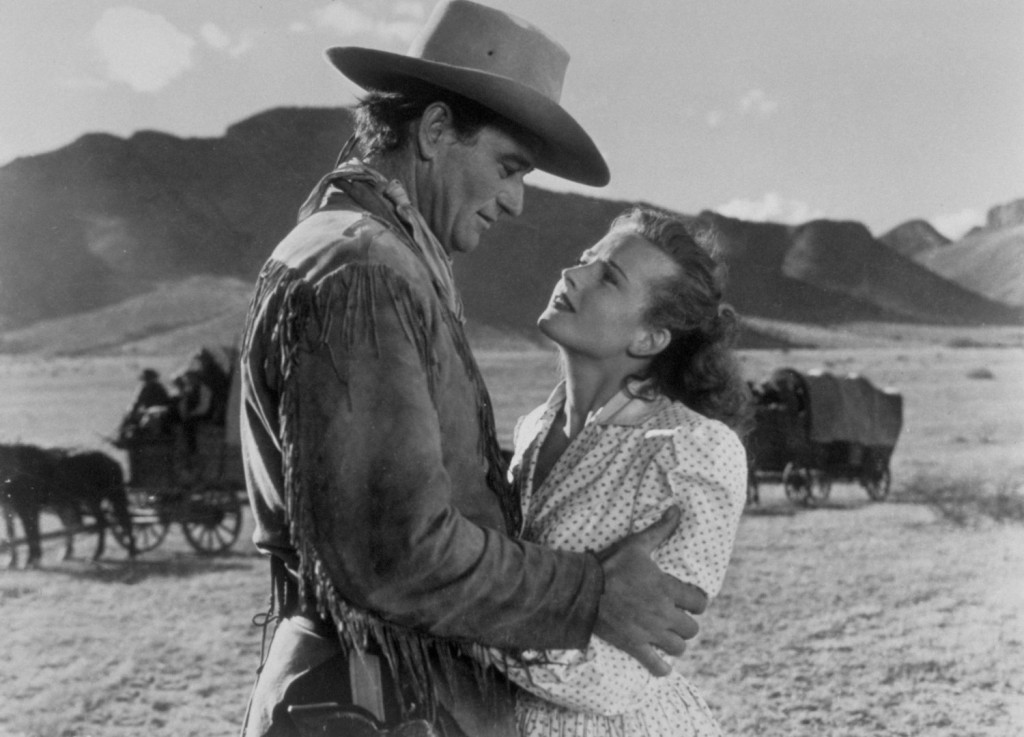 Clift’s first film role was RED RIVER, so his freshness was both text and subtext; he played an upstart in the film, and his casting served a similar function. Wayne may have looked the part of a matinee idol in STAGECOACH, but by 1948 he already conveyed the authority of age. He was very clearly the senior player to Clift, and so too was his character, cattle rancher Tom Dunson, to Clift’s character, adopted protégé Matthew Garth. Throughout the progression of the story, which concerns an arduous interstate cattle drive, the two become romantic rivals, sparring over the affections of a lady, played by Joanne Dru, who is no bland ingénue but in fact — typical of Hawks — a vocal and assertive grown woman. There’s actually a sex scene in this movie — off-camera and implied, but proof this is not a simple mainstream oater but a more emotionally complex story for grown folks. 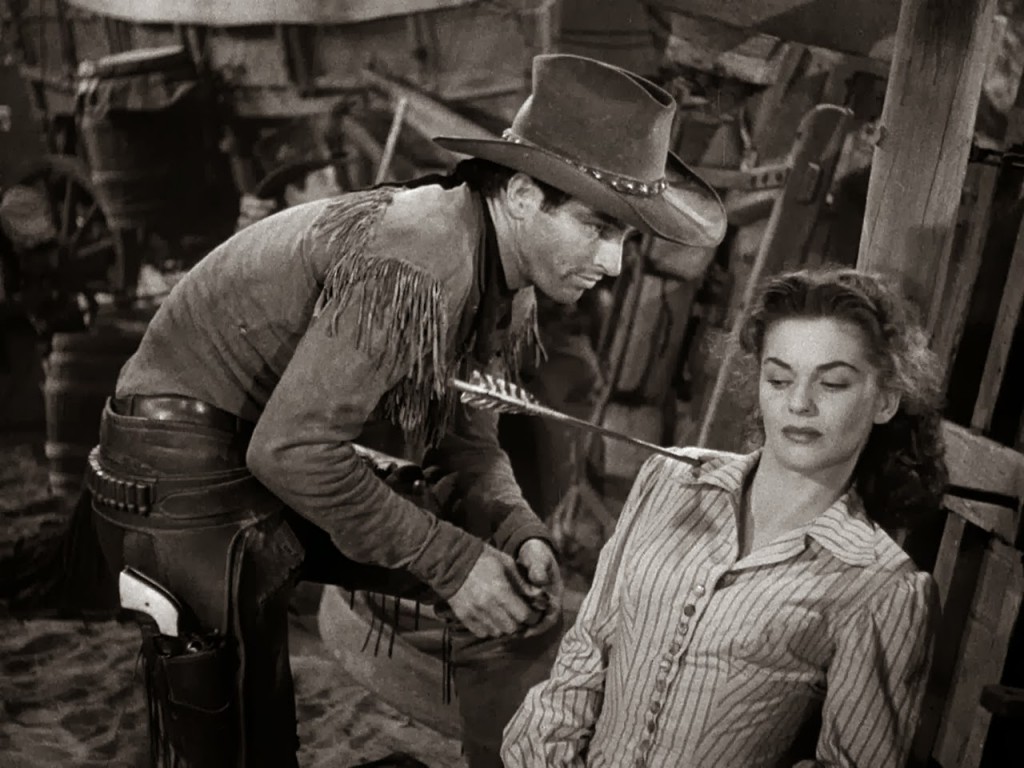 In addition to the hetero love triangle, RED RIVER is also a love story between men — not likethat, though it does come noticeably close in places — but the affection between Dunson and Garth is threatened by more than one ‘suitor’ (not enough room here to discuss the evocatively-named gunfighter Cherry Valance) and while tensions between the two men reach the point of mortal enmity, the reconciliation is the total point; in other words, important as she is to the story, RED RIVER is not as much about who ends up with Joanne Dru than it is about how Dunson and Garth resolve their issues. 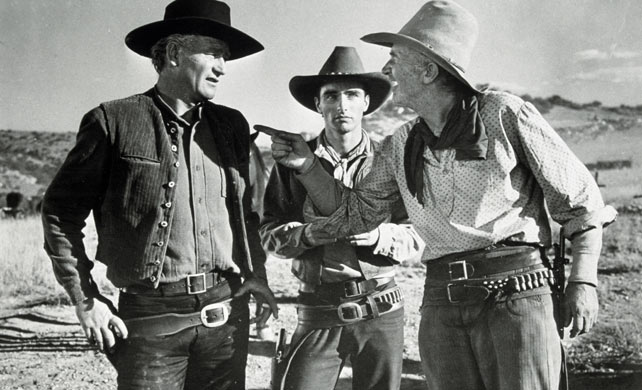 Beyond all of the above, RED RIVER also has lush black-and-white cinematography by Russell Harlan (RIOT IN CELL BLOCK 11) which conjures up the inspiring scale of the Old West, and a typically rollicking old-coot performance by frequent Wayne co-star Walter Brennan as a brilliantly-appellated character named “Nadine Groot.” RED RIVER is a textbook example of the way the old Hollywood movies managed to Trojan-horse psychological sophistication and big ideas into terrifically entertaining mainstream entertainments. The only reasonable excuse to miss out on this lovingly-produced Criterion release of such a classic film is threadbare pockets. 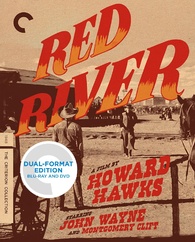 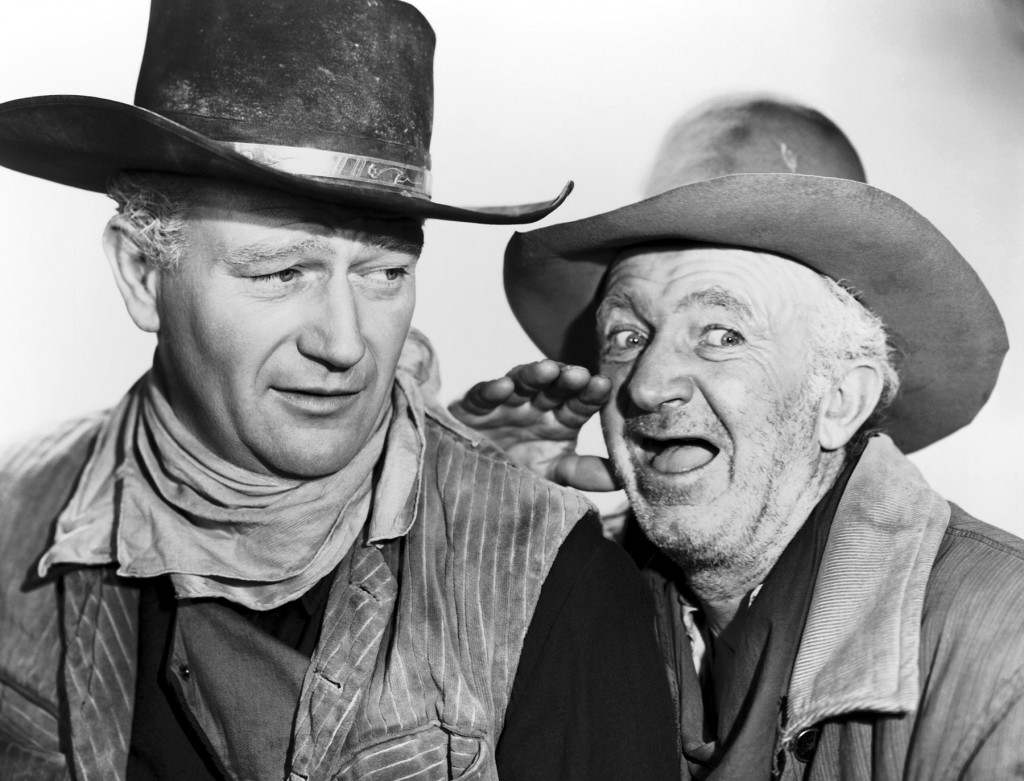