Attention Portland! On Wednesday, September 30th at 7:20pm, our Trailer Trash specialist, Mac Bell, will be presenting Roger Corman’s FORBIDDEN WORLD! Please stop by if you’re in the area, but even if you aren’t, you can still stick around for the rest of the article! 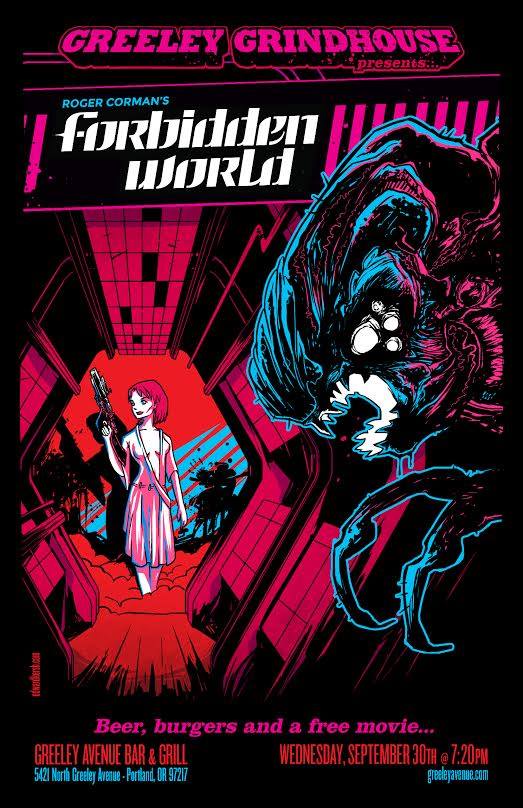 During a return trip to Earth, galactic troubleshooter Mike Colby (Jesse Vint) is awakened from hypersleep to investigate some mysterious goings-on at a research station on the desert planet of Xarbia. Greeted with a mix of snarls and lusty pants by a group of research scientists, Colby stumbles upon a messy situation involving genetic engineering and a failed test subject labeled “Subject 20.”  An attempt to solve a galactic food crisis by splicing human genes with an experimental DNA strain has resulted in the creation of an ever mutating monster dubbed a metamorph. In between sex sessions and steam baths with the station’s luscious female staff (June Chadwick and Dawn Dunlap), Colby searches for a way to destroy the beast. How he ultimately brings down the creature is truly one for the books. 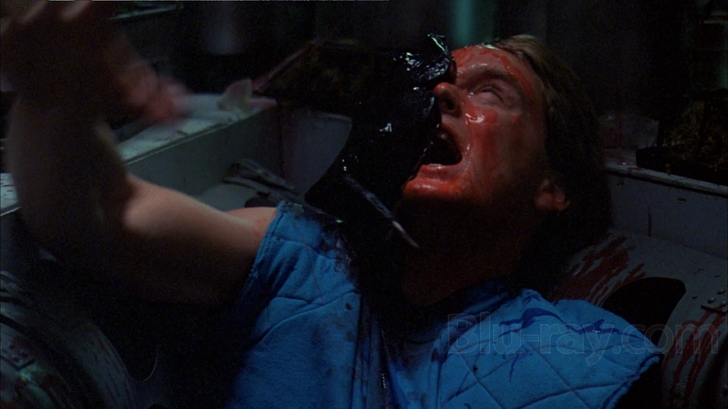 If you’re going to rip off Ridley Scott’s ALIEN (1979), then this is the way to do it. Open up the Roger Corman exploitation cookbook and load your stew with sex, nudity, gore, violent deaths, and futuristic shower scenes. And oh yes, make sure to include a shit-eating grin monster that looks very similiar to H.R. Giger’s creation in the Ridley Scott film. 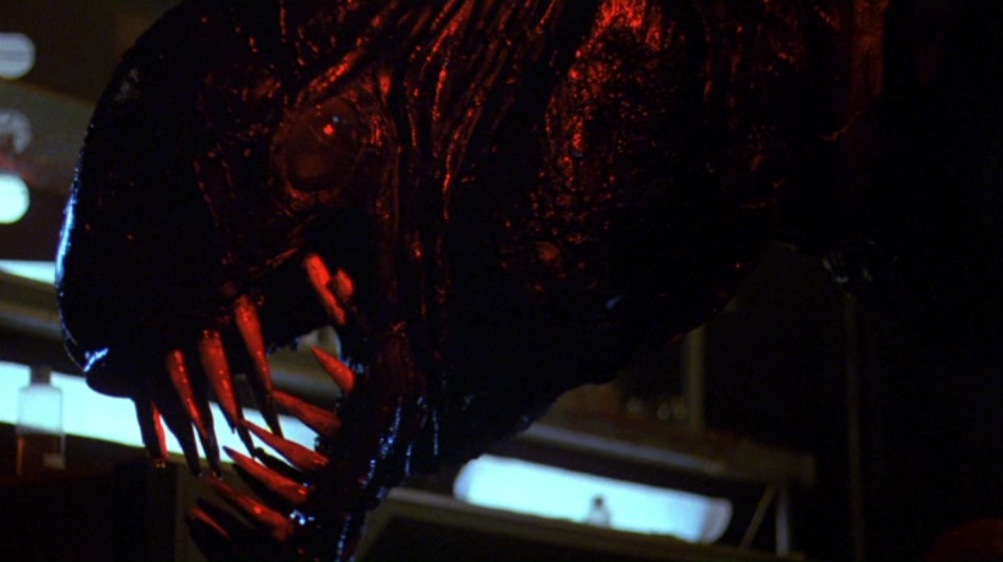 Add an electronica score (the type that was so wonderfully prevelent in early 1980s horror films) by first time composer Susan Justin and you have yourself a perfect piece of sci-fi/horror trash. Made on the cheap by a team of creative and hungry filmmakers who knew how to make the most out of the Corman buck, FORBIDDEN WORLD delights with its imaginative gross-out set pieces and solid B-movie acting. 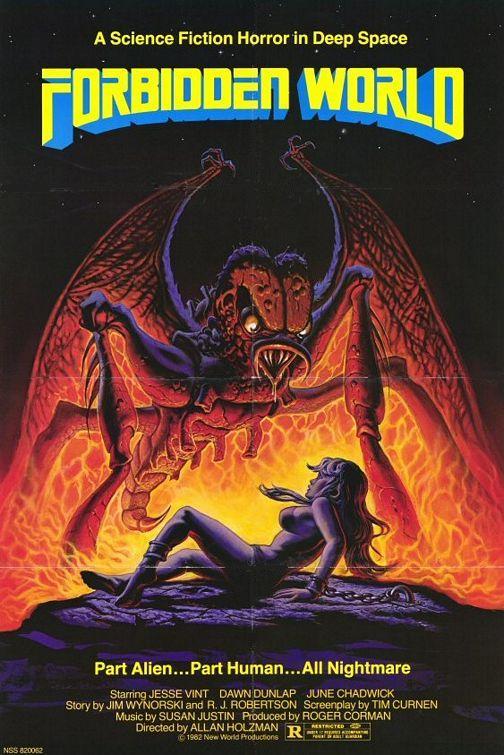 Bundled together in a tight 77-minute package, the film plays better than Corman’s other ALIEN clone, GALAXY OF TERROR (1981), primarily because it doesn’t take itself as seriously and ultimately, holds up better because of it. Fans of low-budget, R-rated monster movies can’t go wrong with this sleazy treat. 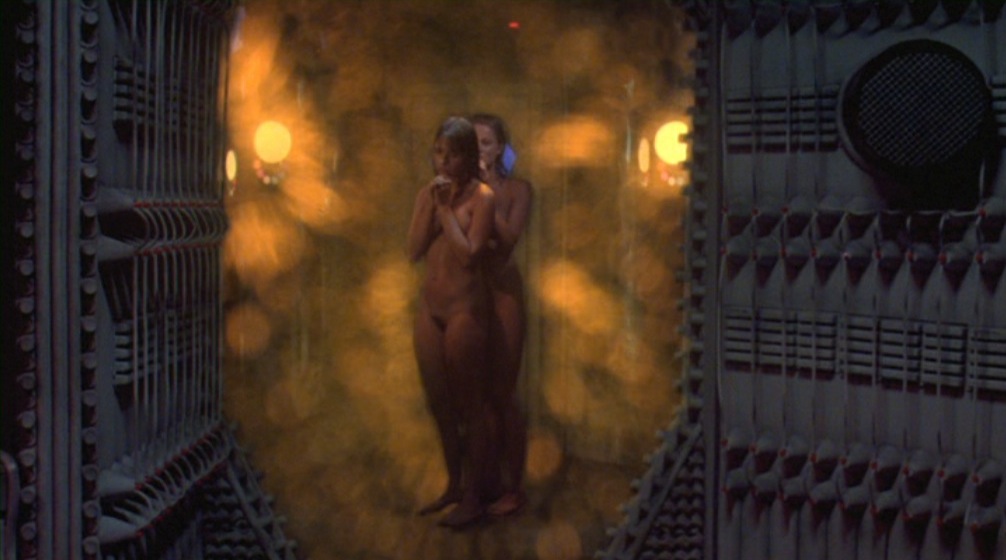 Discovering that a cancer sandwich is the only food item Subject 20 isn’t likely to handle well within its steady diet of human goo, mad scientist Cal Timbergen (Fox Harris) forces Colby to cut him open and remove a tumor the size of a grapefruit from his chest. Sans morphine for most of the procedure, Cal screams a good one as the growth is ripped out of his body.  Upon Timbergen’s instructions, Colby then feeds the tumor to the metamorph during a climatic battle, resulting in its death and in one hell of a mess as it vomits pink goop all over the research lab. Not nearly as subtle as Wells’ germs taking down the Martians in WAR OF THE WORLDS, but just as memorable. 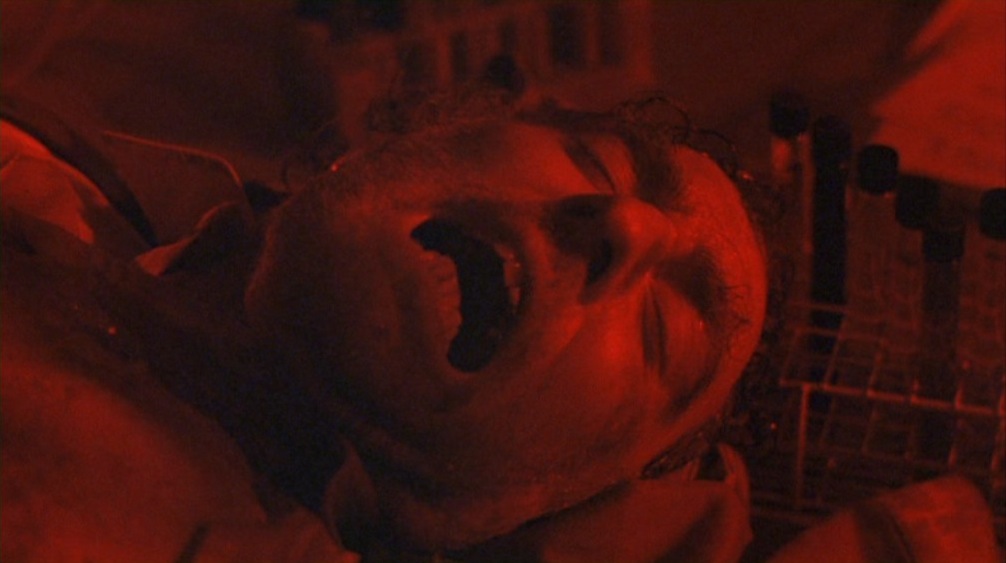 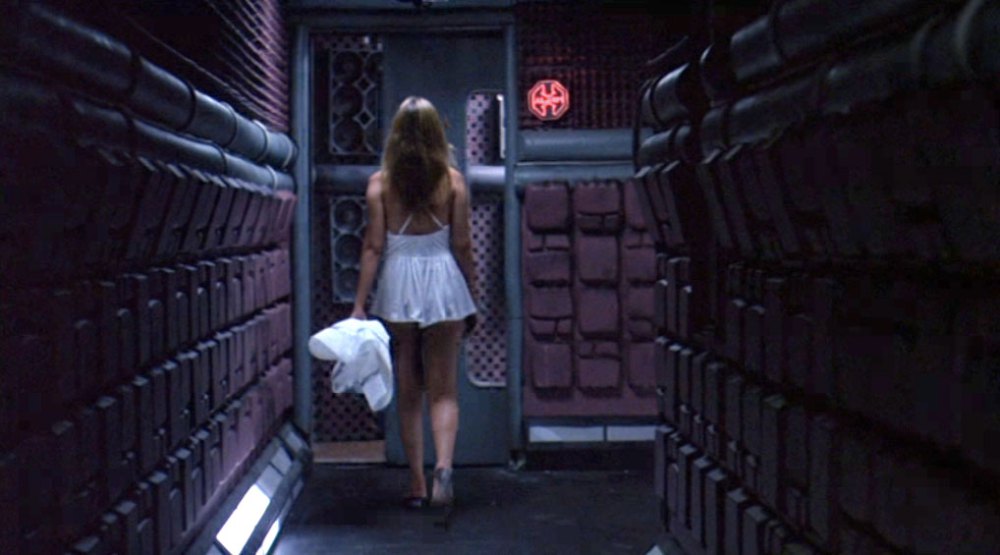