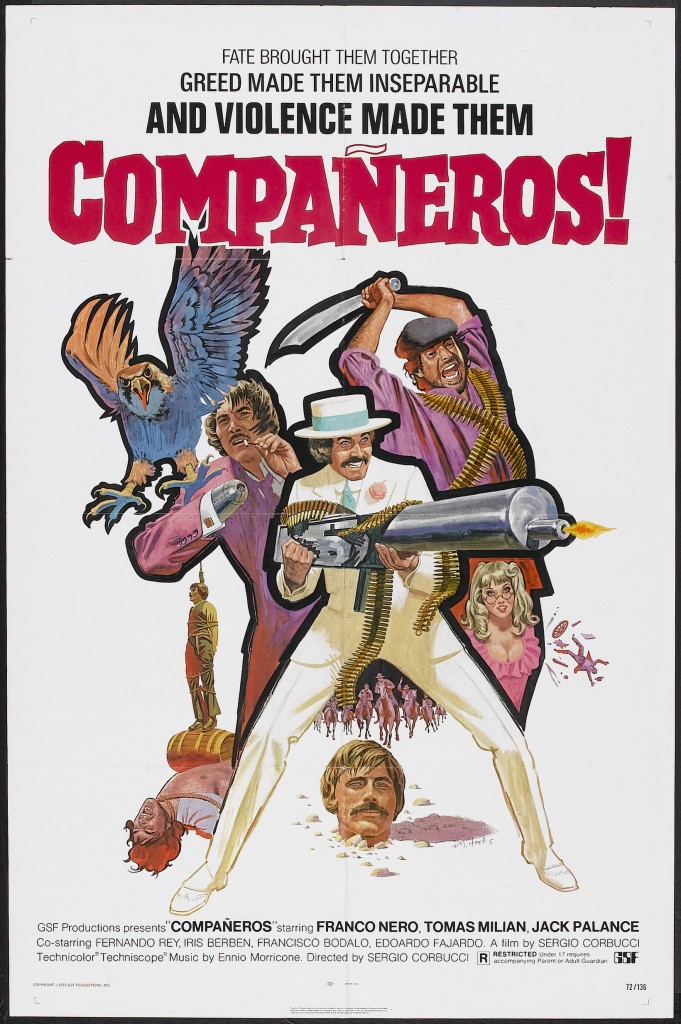 With DJANGO, Sergio Corbucci made the single most influential “spaghetti” Western outside of A FISTFUL OF DOLLARS, and with THE GREAT SILENCE, Corbucci made a straight-up masterpiece, regardless of genre. But DJANGO is pretty damn grisly and THE GREAT SILENCE quite possibly has the downiest down ending of any movie I’ve ever seen. With COMPAÑEROS he had a little more fun.

COMPAÑEROS borders on slapstick, quite frankly. The odd-couple pairing of the two heroes is apparent before either of them says a word: Cuban-born Tomás Milián, as he so often did, plays a Mexican, in this case a beret-wearing revolutionary, whereas the very Italian Franco Nero goes very blond to play very Swedish. So stolid and stoic in most of his notable performances, Nero is uncommonly animated in the role, where he plays a mercenary come to Mexico during the revolution and reluctantly paired with Milián’s character, who nicknames Nero “The Penguin.”

There is, no doubt, plenty to be said about Italian filmmakers using American genre trappings to make a period film about Mexican politics, but that isn’t as fun to talk about as Jack Palance’s character, an American who is out to destroy Nero. This is one of the strangest performances in the entire genre, which, let’s face it, is a strange genre to begin with. Henry Silva was pretty weird in THE HILLS RUN RED but I’m pretty sure Jack Palance out-freaks him here. Palance plays the part with a wooden arm, which he lost when his pet hawk pecked it off to save him from a crucifixion (long story, but it’s why he hates the Penguin). That might be a somewhat atypical tale which is why Palance’s character carries the simple name of “John.” Another thing to know about John is that he’s a total stoner. Homes beat Cheech & Chong to the movies by eight years.

At one point John gets the better of his two enemies, and has them buried up to their necks in sand. This is surely upsetting to those in that predicament, but to the rest of us that is never not funny. COMPAÑEROS is maybe the single best guys-buried-up-to-their-necks-in-sand movies in a highly limited subgenre that also includes CREEPSHOW, THE SCORPION KING, and ONE CRAZY SUMMER. This movie truly is an odd duck – sorry: penguin – but it’s as fun as the Ennio Morricone theme song is rousing. Just try to get it out of your head. Don’t worry, you won’t want to.