THE DARK KNIGHT, released on this date in 2008, was one of the first movies I ever wrote a word about online. As far as the public record is concerned, I never have gotten around to writing anything about 2005’s BATMAN BEGINS, and it’s looking less likely by the day. In terms of internet-time, it’d be like opining on stegosaurs.

What follows is a condensed version of two separate posts I wrote on the same movie — you’ll see as you read it how, even in 2008, I was trepidatious about voicing any reservations about such a critical and popular prize-hog. As some found out the hard way, my initial instincts weren’t too far off the mark.

People were in a frenzy over these movies before they even arrived in theaters. And then things got even worse.

Now in 2016, it turns out all of that was only a start. Batman’s fighting Superman on screen, and THE DARK KNIGHT RISES now looks demure by comparison. Our great culture war today, for some uncanny reason, is being waged over GHOSTBUSTERS. And let’s not even talk about what’s going on outside the theaters, because there’d be no end to it.

For some reason, while many people seemed to be comparatively lukewarm-to-positive on BATMAN BEGINS (I dug it, by the way), there are many who seem to take THE DARK KNIGHT and THE DARK KNIGHT RISES even more seriously than they do those two presidential elections that happened in 2008 and 2012.  Let’s put it this way:  I’ve never met an “undecided voter” when it comes to Nolan-Batman fans.

Maybe it’s fitting that fearsome madness should erupt around a character who primarily exists as a storytelling prism by which to examine madness and fear.  But he’s also a character whose best stories involve conquering those twin demons, and that, I think, is why he means so much to so many of us.

So these are my opinions about some Batman movies.  That’s all they are.  You can agree or you can disagree.  I’m sure I’ll hear about it either way. Here goes…

About THE DARK KNIGHT, an ocean’s worth has been said and written.  My pontifications may be just another drop in that ocean, but it’d have to be a pretty damn sincere drop.  I love Batman.  Have done ever since I was shinbone-high.  This is a character close to my heart, so what the hell, here it is, my two cents on THE DARK KNIGHT:

Mostly, I totally loved it, and I still do.  There were a lot of great moments, and when I say great, I mean astounding.  Seeing it on IMAX, the full-screen city establishing shots and most of the action sequences reclaim the meaning of that overused word “awesome.”  And having gone in the first time knowing as little about the plot as possible, I was rewarded, because this movie has the power of surprise. I did as good a job as I could do of blocking out such knowledge prior to the fact, but it wasn’t easy.  The pre-release thunder was deafening.

But it’s not perfect.

It comes so close. THE DARK KNIGHT is the most like Icarus of all superhero films; it just almost touches the sun.

We all know by now what’s so incredible and superlative and timeless about this movie – Heath Ledger’s uniquely intense and committed portrayal of the Joker, about which I can write absolutely nothing that hasn’t already been said by more influential writers; the portrayal of Batman by Christian Bale, just as good yet way underrated by comparison; Wally Pfister’s crystal clear cinematography, which again is even more breathtaking when seen on IMAX screens; the deceptively simple, sharp production design by Nathan Crowley; the fantastic score by Hans Zimmer and James Newton Howard — a marvel of simplicity with its ominous theme for the lead character (that cresting wave of just two notes) and its even more ominous theme for his nemesis (that dirge of just ONE note) — and of course, the overall vision of Christopher Nolan, a director uncommonly interested in thought experiments and in engaging the widest possible audience with them.

By all rights this should be my favorite comic book movie ever, and in many of its many incredible moments, it almost seizes that title.  But the flaws hold it back, for me.  They are sizable flaws or I would not have honed in on them.  There are three in total.

1. Two-Face coming up out of nearly nowhere.

Everybody noticed this problem; that’s how you know it’s a problem.  The movie did a great job setting up valiant district-attorney Harvey Dent (Aaron Eckhardt)’s rise and fall, but then abruptly fast-forwarded him into the murderous Two-Face in the third act and [spoiler] killed him off.  Why?  Because somebody had to die.  SOMEBODY had to pay for [eight-year-old spoiler] what happened to Maggie Gyllenhaal.

Obviously there was initially a plan to keep the Joker in these movies, so when real life events made that impossible, it was apparently deemed necessary by the powers that be (whether they be the Nolans or the higher-ups) that the other major villain had to die.  This is part of the weird, hypocritically-puritanical morality of big-budget Hollywood movies.  For some reason, the vast majority of these major comic book movies don’t seem to be narratively satisfied until they have blood; until they kill off a villain at the end.  The Jack Nicholson Joker, the Danny DeVito Penguin, the Willem Dafoe Green Goblin, the James Franco Green Goblin, the Alfred Molina Doctor Octopus, and so on — all killed off, even at the weighty expense of the merchandising opportunities of the future.

So now this new Batman franchise left itself with the terrible conundrum of having killed off a well-developed villain character onscreen, when the remaining well-developed villain character survives onscreen, but has been tragically lost offscreen. I wish the Nolans had been able to create an entirely new villain for THE DARK KNIGHT‘s sequel. They made Ra’s Al Ghul compelling, and who else besides the most devoted fans and the working comics folk remembered him before BATMAN BEGINS? A new villain would have been — and remains — the answer. The most important character in this series has always been Batman, and the first two Nolan movies were smartly built around him. The third one got too cluttered with characters, and now — with Batman recast — they’re exponentially complicating the problem by first adding Superman and soon, the entire Justice League. The new Joker is getting shuffled in with an entirely different group of protagonists. It’s a multi-car pile-up, really. If superhero movies keep needing to one-up (or one-thousand-up) themselves each time out, they start losing the focus on the guy we came to see. It’s happened time and again.

2. The vacuum where a love interest should be.

The other major problem with THE DARK KNIGHT, and I hate to say it because I really have liked her in other movies, is Maggie Gyllenhaal.  The character is what it needs to be, but the performance is a dead zone.  If the smart, sarcastic, lively Maggie Gyllenhaal from STRANGER THAN FICTION had shown up for THE DARK KNIGHT, than there wouldn’t be a problem. But in this film she feels entirely disengaged, apathetic, bored. I didn’t believe for a minute that both Bruce Wayne and Harvey Dent would be so ferociously into this dull woman, and I didn’t feel her loss to be as tragic as it very much needed to be. On a narrative level, this movie needs the audience to fall in love with Rachel Dawes so that when we lose her, we understand why it sends Batman on the path he takes at the end.  In that role, neither actress who’s played it has cut the mustard.

Why do these comic book movies so often have so much trouble finding an equally compelling female lead? Strong man need strong woman. Would we care as much about STAR WARS if Carrie Fisher didn’t bring cojones to Princess Leia? I don’t think so. Don’t cram a love story into my Batman movie if you can’t make me care about the lady involved.

Without that, no, you don’t have the greatest comic book movie ever. You have a very good comic book movie, but not The Greatest-Ever Comic Book Movie. That’s hopefully still to come.

Dif I have a suggestion? Yes.  Just off the top of my head: Michelle Monaghan continues to strike me as an easy answer to a whole lot of problems.

This is a tough argument to make, because it’s also one of the things I appreciate so much about the Nolan approach to these movies.  These are films built to house expansive ideas, about fear and heroism and governance.  I respect that. It’s a far nobler thing, in every way, than the standard overheated empty-headed blockbuster. In a world of four-and-counting TRANSFORMERS movies, I can’t believe I’m about to complain about a movie being too smart.

But it gets to be a little much, I think. For my tastes, anyway. There’s SO much talk, so much speechifying.  It’s not as if the terrific action scenes don’t make up for it, of course, but I feel like the movie is weighted down with a lot of weighty talk.  Nowhere is this clearer than the prison barge scene, where the Joker threatens to blow up one of two ferries, one carrying civilians and one carrying inmates.  After several fraught moments of dramatic pauses and much debate, the inmates make the first move to act — but properly. This is all very well-written and I do get what Nolan is trying to do — to portray the city of Gotham and its people as much as their caped protector. But, to me, that doesn’t change the fact that it’s a long, very talky sequence in the middle of what, at its core, had better be an action movie.

In this movie, everybody’s got a whole lot to say about masks and capes and chaos and order and family and legacy — does anybody else feel like they’re auditing an undergraduate lecture in moral philosophy being given a guy in a Batman costume, or is it just me?

In light of these three not-minor complaints, I quietly suggest that this DARK KNIGHT is not exactly the perfect movie I heard tell of before I went in to see it, that best-of-year, best-of-decade, flawless masterpiece to be raved over for the last couple weeks and onwards until eternity. It’s a strong B-plus. It’s a flickering A-minus. There’s just a little bit of all-the-way excellence missing there. This time around though, my eyes, mind, and butt, and the A-plus grade of the movie itself, coulda used about twenty minutes shorn from the run-time.

And I’m going to stop there for now, because we’re on the internet after all. Here on the internet, people get threatened with death, or worse, for writing less offensive sentiments than the simple suggestion that THE DARK KNIGHT may not actually be the be-all and end-all of superhero movies. (Psst: It ain’t even top three.) The best is yet to come. It’d better be, or what else are we doing flocking to more and more of these things every year? 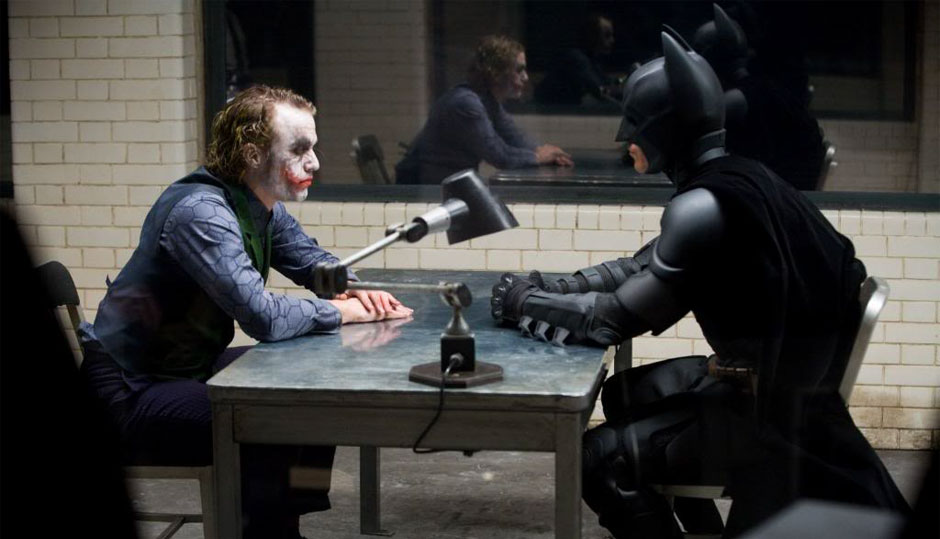 Find me on Twitter and shout at me there:  @JONZILLA___