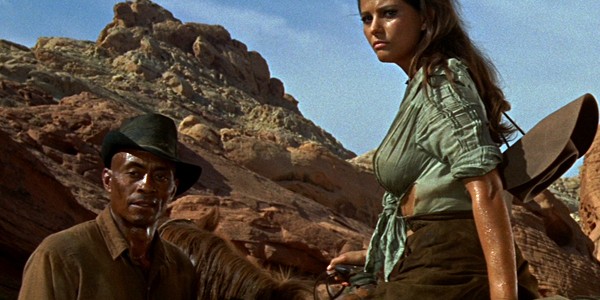 THE PROFESSIONALS is a politically-charged white-men-in-Mexico Western that starts out bombastic and boistrous and manages to maintain that confident stance throughout its runtime. The opening vignettes introduce the four lead characters in their most characteristic arenas.

Rico Fardan, the reserved, pragmatic, always-prepared leader, is shown testing out a new machine gun that you know full well you’ll eventually see him use, due to the fact he’s played by Lee Marvin.

Hans Ehrengard, the frontier-era horse whisperer, is shown punching the shit out of an animal abuser.  That’s quintessential Robert Ryan, doomed decency and temperamental violence often in the same character.

Jacob Sharp, the archer, is  bringing a live captive into town for sentencing.  As played by Woody Strode, he’s a proto-DJANGO[UNCHAINED-style], a calmly-effective bounty hunter in an unfriendly time for guys who look like him.

And Bill Dolworth, the devilish explosives expert, is first introduced in bed with a woman who we quickly find out is another man’s wife, because the guy is about to walk in the door and Dolworth is pulling on his longjohns and diving out the window.  Burt Lancaster, one of the greatest Hollywood leading men ever, could play noir and he could play arthouse drama, but here he’s the comic relief and the leading man all in one.

Burt Lancaster, Lee Marvin, Robert Ryan, and Woody Strode.  That is kind of an all-star super-team of old-school movie tough guys.  If I have to bring up THE A-TEAM to get some of you youngsters to go watch this lesser-acknowledged classic, then that’s what I’m going to do.  It’s clear where that popular 1980s action template came from — the grizzled and grey veteran soldier, the horndog ladies’ man, and the two other guys who handle all the transportation.  Four guys with their own individual and shared histories take on a dirty job no one else is able or ready to handle.

In THE PROFESSIONALS, these four rough riders are hired by big-business tycoon Ralph Bellamy — you know him best from a weirdly similar role in TRADING PLACES — to rescue his young wife from a marauding revolutionary who has taken her south of the border.  Bellamy perenially played a lovelorn shnook but here he’s an intriguingly nastier sort of character.  In the great Hollywood tradition of casting great stars in ethnically incongruous roles, Jack Palance plays the revolutionary, “Jesus Raza,” and the Tunisian-by-way-of-Italy bombshell Claudia Cardinale plays the Mexican-born “Maria,” an old flame of Raza’s, as it turns out.  If you’ve read my writing before you already know how I feel about Claudia Cardinale. Or you could just look at a picture:

The movie works just fine on the level of supreme entertainment, but if you read Richard Slotkin’sGunfighter Nation, as I did when I was lucky enough to learn from him as an undergraduate, it becomes apparent that THE PROFESSIONALS is reflective of the era during which it was made.  The Professionals are comparable to the American Green Berets, an elite military-trained fighting force, who are sent into a foreign nation for dubious reasons and in the course of their adventure they become disillusioned with their mission.  Very potent stuff, but it’s buried under a rollicking mainstream Western facade.  The subtext is there if you want to think about it, but you can also just sit back and enjoy.

Since I’m a huge Robert Ryan fan, I do wish he had a little more shine in the movie.  According to some interviews on the Blu-Ray, Ryan wasn’t well during filming, which could explain it.  (I’m also a Woody Strode fan but unfortunately Woody Strode being underused in a film is somewhat more routine occurrence.)  Ryan and Strode, as the horse wrangler and the team scout, are really playing strong support to the buddy-movie pairing of Marvin and Lancaster, the gunman and the dynamite setter.  Ryan does play an interesting contrast to his frequent noir antihero persona, though.  This is one of his most thoroughly decent roles – Ryan’s horse expert is tender and protective of every horse the group encounters.  He’s one of those guys who seems to care more about animals than people, and who can blame him, in a movie where one species is clearly more consistently trustworthy than the other.  Many of this movie’s heroes have abandoned ideals for commerce when it begins.  What makes the movie ultimately so thrilling and rewarding, then, even more than the banter and the gunfights, is to watch them rediscover actual virtue.  That these Professionals end up refusing a hefty payday for the right reasons and manage to stick it to a corporate fatcat in the process is arguably even more satisfying today than in 1966.  Besides, who can resist the following exchange:

“Yes sir. In my case an accident of birth. But you sir, you’re a self-made man.”