First things first: The Predators have been revealed to own Predator dogs now. I just want to say that it warms my heart to know that Predators are dog people. If it had turned out that they were into cats, I don’t know that I could take them as seriously. Their main competitors, the Aliens, are sweet on cats, and that’s why I rooted for the Predators during those last two awful films. (It’s a fact that the Aliens like cats. This is what explains the survival of Jonesy from ALIEN through ALIENS. Notice how Ripley has to fight her ass off to survive, but Jonesy just cutes his way through to cryo-sleep.)

But I’m getting ahead of myself once again. PREDATORS is the latest (and best yet) attempt to light a fire under 20thCentury Fox’s PREDATOR franchise. The original 1987 film is a modern action classic, about which I have written emphatically several times before. I’m not as keen on the 1990 sequel, but it has a great human cast and is hardly an embarassment. The embarrassments kick in by 2004, when the Predators are forced to face off against the Aliens (Fox’s other great movie monster from the ‘80s).  ALIEN Vs. PREDATOR is not good, and ALIEN Vs. PREDATOR: REQUIEM (‘Requiem’ for whom, by the way?) isn’t even visible – it looks like it was filmed through a barrel of ink.

So with this revival, the studio went to Robert Rodriguez, who reportedly had a script sitting around since the 1990s.  Rodriguez produced here, and after some work on the script credited to Alex Litvak and Michael Finch, Nimród Antal was hired to direct. I liked his previous movie, ARMORED, and I was enthusiastic about the cast these guys assembled. Obviously things had to be different this time around – you can’t have a bunch of guys as massive as Carl Weathers and Bill Duke and Arnold running around, because that would just seem too comical in this day and age.

PREDATORS is still pretty comical, make no mistake, but the director keeps it moving and the cast keeps it real. Adrien Brody plays the main lead. He’s an interesting, off-beat choice, and he plays the part seriously enough that you almost don’t notice that we don’t learn his character’s name until the final scene. That’s the kind of character development we’ve got here, not that I’m complaining. By the time Laurence Fishburne showed up wearing a Predator suit, I knew that this was the movie I wanted.

(That’s a bit of a spoiler, sorry. You knew from the trailer that he was in it, but I won’t reveal when or why it happens. Anyway, sorry. I won’t do it again.)

The way-obvious high-concept of PREDATORS is that a batch of humanity’s toughest bastards are dropped onto an alien planet as sport, to be hunted by the title character. There’s the lead tough guy (the aforementioned, surprisingly convincing Adrien Brody.) There’s the tough lady sniper (CITY OF GOD’s Alice Braga.) There’s the La Eme enforcer (the great Danny Trejo), the Yakuza assassin (Louis Ozawa Changchien), the death-row inmate (The Shield’s awesome Walton Goggins), and the Sierra Leone death squad officer (MOONLIGHT‘s Mahershalalhashbaz Ali). There’s the giant Spetznaz (Oleg Taktarov) and the tiny doctor (Topher Grace), who is seemingly out of place. Somewhat hilariously, each character comes armed with personality guns – each one of them has weapons that help to individualize them since the script doesn’t have time to. (By the way, my spell-check died a little in the course of this paragraph.)

Interestingly, a lot of these characters stick around a lot longer than you might expect, especially considering the bloodthirsty efficiency of the original film. PREDATORS is definitely the kind of movie where you can gauge how much longer the running time is going to be by how many main characters are still alive. In that spirit, PREDATORS seems to have the hope that you don’t think about it too deeply.  The movie is really one long chase scene, punctuated by sporadic explosions. It is probably a few scenes too long, and it definitely should have ended one shot before it does. But that’s movies in the 2010s. I did consider this: It may have been intriguing if the story had explored the disparate backgrounds of this international gang of cruelty-dispersers, but then again it may also have seemed ridiculous. A PREDATOR movie is probably not the place to look too probingly into the Sierra Leone situation.

On the flip side, that lack of character development does start to strain the tenuous believability that a movie like this needs to maintain to work perfectly (the way that John McTiernan’s original film thoroughly does). You either need to keep character touches entirely out of the picture (a la PREDATOR 1987), or work a little harder to justify some of the inconsistent behavior we see here. Bottom line: All of these people are way too nice. When one of their number is left mortally wounded and suffering, they stand around and debate if they should help him. At various junctures during the movie, various characters go back to save characters they should have no problem abandoning. Even Walton Goggins’ [thankless] character, a racist rapist, at one point expresses sympathy for one of the team.

SIDE NOTE: It’s a bit of a bummer that Walton Goggins, over seven seasons of The Shield, miraculously made Shane Vendrell, on the page a bigoted, misogynistic redneck criminal, into one of that show’s most sympathetic characters, only to be demoted by this movie to a racist rapist. No, he doesn’t rape anybody in PREDATORS, but he talks lovingly of the act. I think he actually says the line: “If I get out of this alive, I’m gonna go rape some bitches.” I have to say that I didn’t expect that, and I’m not sure it was necessary. I like a hard-R action movie, but I don’t need it to be nasty. For the record, he also calls the Predator a “space-faggot.”

Aside from those quibbles (or virtues, if you see the world a little differently than I do), I had a whole lot of fun with PREDATORS. There’s just something simple and pleasing about the concept of a space alien hunting mean people. There are a lot of fun action scenes and some nice twists on the mythology. I like that PREDATORS acknowledges the existence of the original – it doesn’t name Arnold’s character Dutch specifically, but it does reference the intelligence report that he would have filed after the first movie, and in fact that knowledge gives the characters some well-reasoned Predator-fighting information. I liked the entire cast, particularly Brody and Braga, and I got a kick out of the fact that, with the casting of Topher Grace, someone who looks a lot like me (and probably a lot of guys reading this right now) was running around fighting Predators. I liked the production design – they really made Hawaii look like an alien planet! – and the score, which was played by the score from PREDATOR 1987 (with a cameo appearance by the score from JAWS). 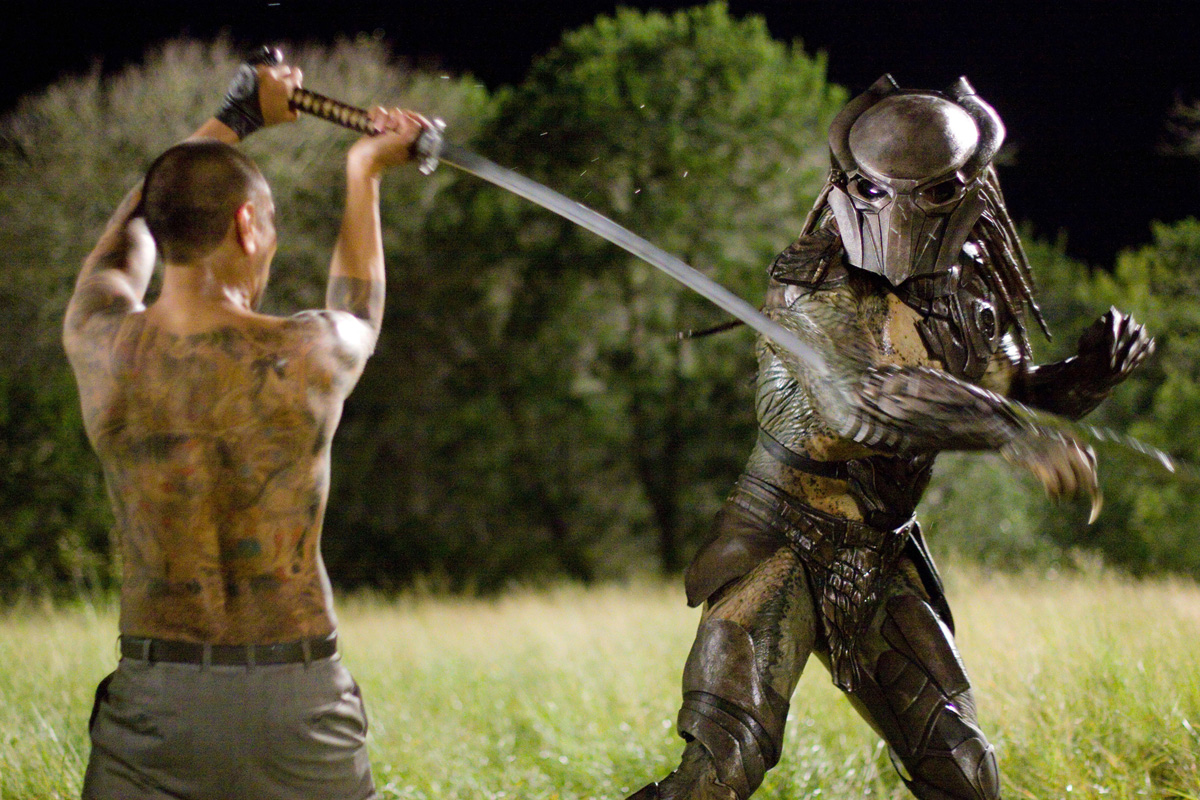 Most of all, I liked the movie that PREDATORS made play in my head. I know I said that it’s best not to think about it too much, but I couldn’t help it. Let’s think this through: All of these different tough guys were brought to this alien planet, right? Well, what’s the selection process? More to the point: How did the abduction process work? That’s kind of an amazing movie, if you try to imagine it. Walton Goggins is in his cell, in his prison oranges, then the doors clang open. He wanders out into the yard, and then a Predator shows up and shanks him with a tranquilizer and takes him to the alien planet. Or Topher Grace is hustling around the hospital, bursts into the ER, pulls open a curtain to see what he expects is a patient, and then a Predator rears up out of the bed and throws a net over his head. Or how about this one:  Danny Trejo is riding around Tijuana, doing badass Danny Trejo things. He stops in a bar and then a Predator shows up and drops a mickey in his tequila. Next stop: Alien planet and Predator dogs.

PREDATORS suggests this whole bizarre backstory of Predators studying and profiling and sneaking around and kidnapping the main cast, and then throwing them out of a plane. As much as I enjoyed the version of PREDATORS that Nimrod Antal and company made, I think I like the one they suggested even more. How about that idea for the sequel? They could call it TO CATCH A PREDATOR… Okay, I’m done.  Thank you, good night.