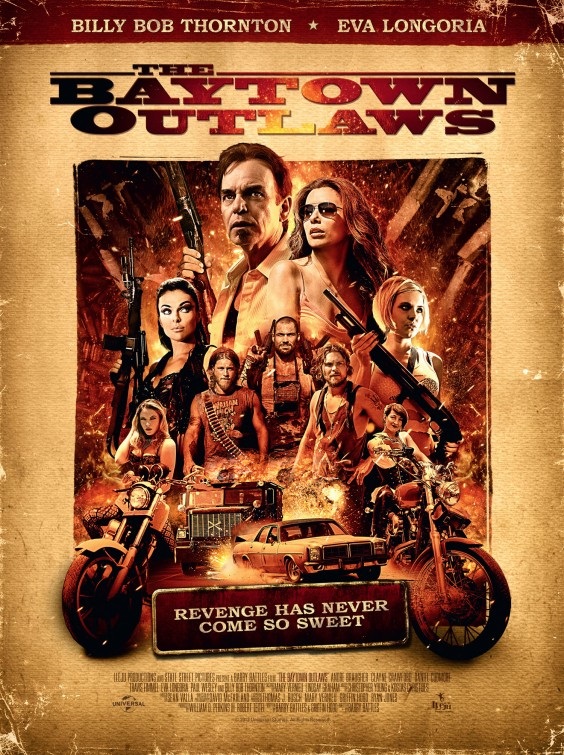 Midway through THE BAYTOWN OUTLAWS, there is a high-speed chase down a country road. Three hired killers who drink heavily and casually joke through murders as they wear Confederate T-shirts are being pursued by another band of killers known as the Nubian Pirates, black guys in a van so armored-up it resembles a galleon on wheels. The bounty is a seventeen-year-old mentally disabled boy confined to a wheelchair.  The trio who have the kid loudly taunt their pursuers as they race down the narrow freeway.  A parked police cruiser watches the two vehicles fly by, and the deputy sitting shotgun activates the siren – only to have his commanding officer promptly switch it off and go “Nope, no, uh-uh, no way.”

Anyway, that’s the moment when I realized that this was my kind of movie. “Cops got better things to do than get killed.” Right?

It took a while to figure out that I liked the movie, because THE BAYTOWN OUTLAWS really pushes it.  A racially-charged shootout with a handicapped person at the center of it all is not normally the kind of thing I can readily endorse.  I’m a die-hard Yankee, most-of-a-Jew and a social progressive, and here comes a shit-stirring way-the-fuck-down-South barnburner to test my delicate Northeastern moral barometer. 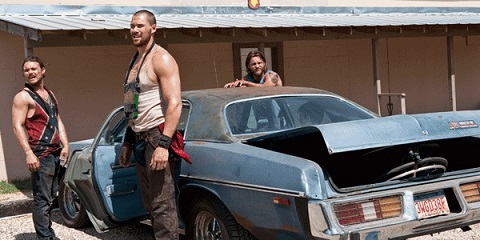 No, it isn’t responsible. And yeah, normally I do have a big fucking problem with that Confederate flag. It all comes down to the spirit of the thing. I happen to believe that if you pay close enough attention, you can kinda vibe where a movie’s soul is coming from, and I get the sense that writer-director Barry Battles and his co-writer/producer Griffin Hood are just mischief-makers having fun being transgressive, and to that I can relate. Turn on the TV and you’ll see plenty of shit, far more popular than this movie will ever be, that is born out of actual spite, cynicism, and hatefulness (what up Seth McFarlane and Chuck Lorre?). THE BAYTOWN OUTLAWS may invoke troubling imagery, detail prodigious acts of violence, and dip into the usage of words like “faggot” and “retard”, but I just don’t get a sense of true nastiness there. Am I being hypocritical? Fucking Family Guy and Two & A Half Men enrage me to the point I’d like to see those entire writing staffs chemically neutered, and yet this movie gets a pass because it entertained the shit out of me? I don’t know, people. Let’s bookmark that question because I’m considering watching THE BAYTOWN OUTLAWS again already.

I feel like if you enjoyed HOBO WITH A SHOTGUN, you’re going to love this one. It’s the same kind of deal. True grindhouse material – guns and motorcycles and knives and arrows and babes in bustiers and fire and sick, sick humor – all revved up past the limits of reason and decency by a cast who is more than willing to play.  My homey Vern picked up a kinship between THE BAYTOWN OUTLAWS and Joe Carnahan’s SMOKIN’ ACES and so did I.  (That’s a compliment coming from me.)  The same kind of enthusiastic, restless creativity is at work. It’s not the most coherent movie, but that’s because it’s bursting with unusual, infectious energy. 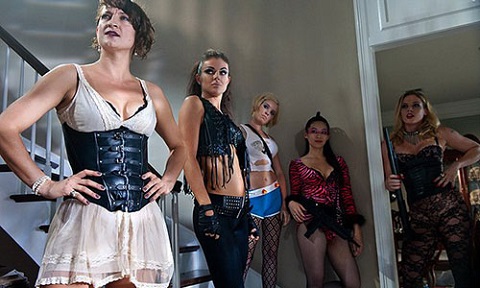 Quick recap: The Oodie brothers are a trio of beer-swilling miscreants who aren’t smart at all but are remarkably talented at violence. The oldest is Brick (Clayne Crawford from JUSTIFIED and ironically, SMOKIN’ ACES 2), the middle brother is Lincoln (Daniel Cudmore, Colossus from X2), and the youngest is McQueen (Travis Fimmel from VIKINGS). These are actors who you’d probably recognize but you probably don’t come into the movie knowing them and liking them, which makes it more interesting, because you get room to dislike their characters. Lincoln, the giant, probably comes off best initially because he’s mute from getting his throat trampled on back during his amateur-wrestling days. He offers up sparse dialogue courtesy of a Speak N Spell he wears as a necklace. (Yeah, it’s that kind of movie.) 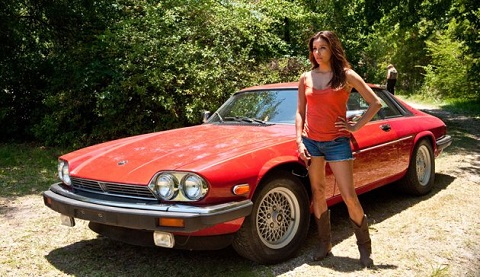 The story kicks in when the brothers get a visit from Celeste (Eva Longoria), who wants to hire them to get her godson back from her louse of an ex-husband, who has kidnapped him. The guys usually only kill, not rescue, but she offers enough dough that they change up their policy. The ex-husband is Carlos (Billy Bob Thornton), a profane and malevolent scumbucket who almost runs away with the movie because, after all, he is Billy Bob Thornton saying awesomely creepy things to people. The brothers find the boy, Rob (Thomas Sangster), and discover he is mute, mentally disabled, and confined to a wheelchair. He’s heir to a fortune, which is why Carlos is holding him (and why Carlos killed his parents in the first place, to be needlessly spoiler-y.) I think one thing that helped the movie for me is that Thomas Sangster is so good at playing the character in an inoffensive, instantly-ingratiating way. Some of the characters say terrible things about him, which is unfortunately believable, but those characters are either corrected, or killed. On the continuum of Hollywood actors playing disabled people, Sangster as Rob is less Sean Penn in I AM SAM or Justin Bartha in GIGLI, much more… what do ya know… Billy Bob Thornton in SLING BLADE. 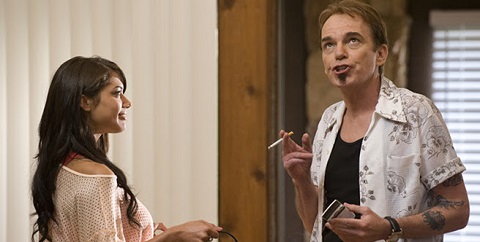 Lincoln and Rob bond instantly. Brick and McQueen follow suit at their own rates. This is such a weird thing to be existing smack in the middle of a movie about hired killers and exploding heads that it can’t help but appeal to me.  Obviously as the movie continues, you find that these stupid rednecks are bad by nurture, not nature, and they become almost tamed as the movie continues. Their “handler” is the county sheriff, played by the great Andre Braugher no less, who it turns out raised the brothers to be his own hit squad, killing off the local criminal element so he can relax instead of endure the arduousness of policework. A subplot ensues wherein the sheriff is investigated by an ATF agent (Paul Wesley, the one from THE VAMPIRE DIARIES who looks like a healthier Justin Bieber) – there’s a hell of a lot going on in this movie, and I haven’t even really mentioned the cavalcade of assassins who Carlos sends after the Oodies once they grab Rob.

The wide-ranging cast also includes Zoe Bell (DJANGO UNCHAINED) and Serinda Swan (CREATURE) as sexy-lady assassins, Natalie Martinez (END OF WATCH) as an illegal immigrant whose decency and timely assistance helps warm the brothers’ hearts, and Michael Rapaport, randomly, who I’m guessing they put in there just so’s us Yankee sons-a-bitches would feel a tiny bit more at home. 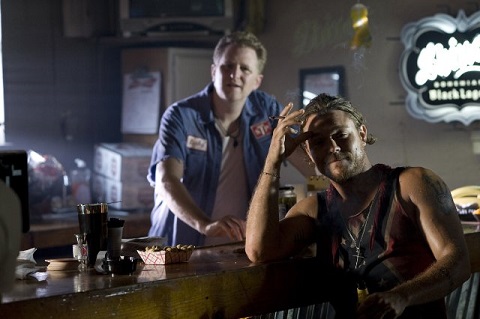 Like I said, a lot going on. It can feel like a big mess sometimes. But it all adds up to a surprisingly entertaining mess, of the sort you want to watch again as soon as it’s done, particularly if you are a reader of this site. Spirit counts for a lot in this corner of the world, and THE BAYTOWN OUTLAWS is one big fun noisy fuck of a spirited movie. 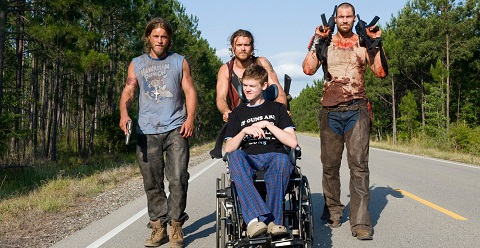