I don’t know much, but I do know that I want a movie called WOLFCOP to exist. I want that movie to be about a rage-fueled cop/wolfman, and I want it to be directed by Lowell Dean (13 EERIE).

Thankfully, this isn’t just some sort of pipe dream; it’s inching ever-closer to actually happening! All it needs is a little nudge from enthusiastic film fans who believe this world just feels a little colder without a lycanthrope lawman out there solving crimes.

I had a brief chat with Lowell about where the project stands, and how you Werewolf lovers can help bring it to life:

Sweetback (SB): It’s been a little over two months since we last spoke with you about WOLF COP. I’ve been keeping up on the project and it sounds like it’s been an absolute whirlwind. Where does the project sit currently, and how close is it to coming to fruition?

Lowell Dean (LD): We are currently in the Top 10 but where we sit exactly fluctuates day to day, hour to hour. There are many factors taken into account – visits to our page, views and comments of our trailer, hearts and sharing of our missions. So many things! We are definitely closer than ever before to getting WOLFCOP made, but the competition is stiff. There are some really great projects in the top 10, so I think it is going to come down to what type of film CineCoup wants to make – and who has the most vocal, passionate fanbase!

SB: One of the really heartening – and somewhat surprising – things about your campaign is that it’s really shown how much passion there is around werewolves and the werewolf mythos. There are werewolf websites, radio shows, facebook groups and podcasts – full of ravenous fans of werewolf films and literature. Have you been surprised at the support from this community?

LD: I had no idea there was this large, untapped werewolf fan base. I was quite surprised… and impressed! It wasn’t until we started promoting our trailer that I even heard about things like #werewolfWednesday on twitter. We all know (based on popular media) that there is a large fan base for zombies and vampires, but you really don’t hear as much about werewolves. They are often of the sidelines of the monster world, present in film and TV but relegated to the shadows or shown as bad CGI puppies. The werewolf community seems to really embrace our retro-spin on the genre and they’ve given us quite a bit of support. I’ve done blog interviews, radio spots, podcasts – all in the name of wolves and werewolves. Lots of howling! 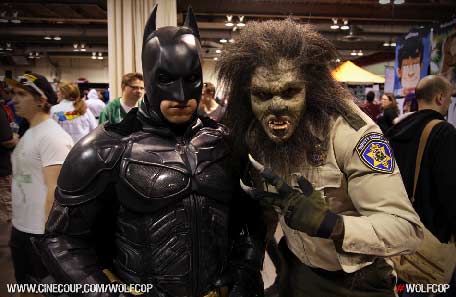 SB: You recently brought WOLF COP to the Calgary Fan Expo? What sort of response did you get from the fans there, and what was the experience like altogether?

LD: The Calgary Expo was a unique experience, and I meant that in the best possible way. There are thousands of fans congregating in one building – many in amazing costumes, all with positive energy. It was a great place to be if you are fan of comics, genre films, or entertainment in general. It was my first time there and I had no idea what we were in for… we must have talked face to face to three thousand people about our film. It was exciting and exhausting! I was impressed to see how quickly people “got it”. You would see them read the title on our banner and then laugh to themselves, then come over to chat to our team, or get mauled by WolfCop himself (who was there in person). There was definite interest.

SB: Here’s the big question: You’re in the CineCoup Top 10. You’ve made it this far. What can readers do to get this movie made?

LD:  NOW is the time for people to join CineCoup, earn some votes and then use those votes for WolfCop. The vote is May 30 to June 2nd. Votes can be earned before and even during the voting period. It is easy to join (especially though facebook) and the missions are simple and fun. Most importantly it is all free!

The direct link to our CineCoup page is: http://www.cinecoup.com/wolfcop

Here’s a quick video on how to get started:

SB: And let’s get those social networking links once again for those looking to keep up on the progress of the project.