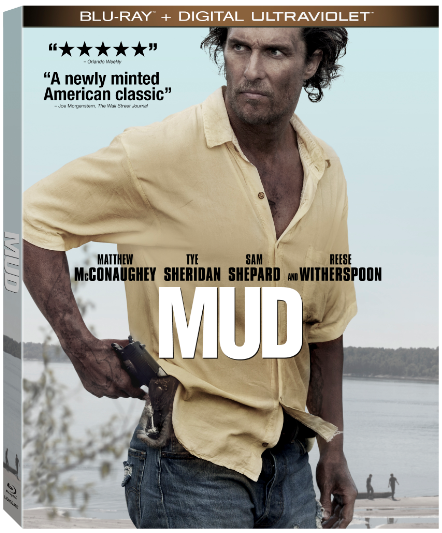 Mud is a timeless adventure about two boys, Ellis (Sheridan) and his best friend Neckbone (Lofland), who find a mysterious man named Mud (McConaughey) hiding out on a deserted island in the Mississippi. Mud tells the boys fantastic stories about his life including how he once killed a man in Texas and now vengeful bounty hunters are after him. He says he is planning to meet and escape with the love of his life, Juniper (Witherspoon), who is waiting for him in town. Skeptical but intrigued, Ellis and Neckbone agree to help him. But it isn’t long until Mud’s tall-tales come to life and their small town is besieged by bounty hunters out for blood.

Written and directed by Jeff Nichols (Take Shelter, Shotgun Stories), and nominated for the prestigious Palme d’Or at the 2012 Cannes Film Festival, the Mud Blu-ray and DVD contain an audio commentary and multiple featurettes that examine numerous aspects of the making of the film. The Mud Blu-ray Disc and DVD, featuring Digital UltraViolet, will be available for the suggested retail price of $24.99 and $19.98, respectively.