James Gandolfini came to my attention when he played Virgil in TRUE ROMANCE. Virgil works for Vincenzo Coccotti (who works for Blue Lou Boyle) who has sent Virgil to find a suitcase full of blow and Alabama’s boyfriend Clarence. Ya’see, Virgil is an evil motherfucker who’s following orders until he decides to give his target a shot at the title and ends up a pile of bashed in flesh on the floor. But let’s back up. Before the main event, Gandolfini’s Virgil gives this monologue: 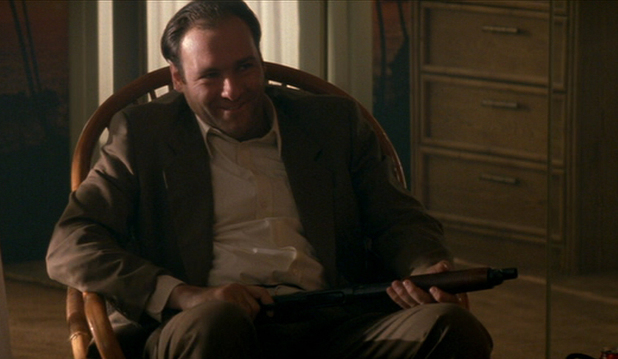 Now the first time you kill somebody, that’s the hardest. I don’t give a shit if you’re fuckin’ Wyatt Earp or Jack the Ripper. Remember that guy in Texas? The guy up in that fuckin’ tower that killed all them people? I’ll bet you green money that first little black dot he took a bead on, that was the bitch of the bunch. First one is tough, no fuckin’ foolin’. The second one… the second one ain’t no fuckin’ Mardis Gras either, but it’s better than the first one ’cause you still feel the same thing, y’know… except it’s more diluted, y’know it’s… it’s better. I threw up on the first one, you believe that? Then the third one… the third one is easy, you level right off. It’s no problem. Now… shit… now I do it just to watch their fuckin’ expression change.

Gandolfini passed away at the age of 51 after suffering a major heart attach while vacationing with his family in Italy. Did I bury the lead? You’re damn right I did. I would rather celebrate the great moments from a brilliant character actor than dwell on his death. He was more than Tony Soprano. Every obituary you read on the guy is going to note that series, and it isn’t wrong to do so but there was a body of work prior to, during, and after that show’s end which is equally impressive. From TRUE ROMANCE, to his portrayel of Bear in GET SHORTY. From the quirky Col. Winter in THE LAST CASTLE to the touching voice performance of Carol in WHERE THE WILD THINGS ARE. There is a lot of Gandolfini to get lost in. Watch THE SOPRANOS again, just don’t let it define his career.

I went back and found Gandolfini’s appareance on INSIDE THE ACTOR’S STUDIO. It’s a great glimpse into the mind of a blue collar actor. Among the highlights are the films that made an impact on him such as MEAN STREETS, JEREMIAH JOHNSON, and WEST SIDE STORY and his remarks on TRUE ROMANCE starting at the 12:42 mark.

The episode ends with this:

James Lipton: “Finally Jim, if Heaven exists, what would you like to hear God say at the pearly gates?”

James Gandolfini: “Take over for a while, I’ll be right back.”