A whole bunch of cool from MGM just landed over at Warner Archives. From the long out-of-print Brian Trenchard-Smith classic SIEGE ON FIREBASE GLORIA to Sho Kosugi in PRAY FOR DEATH, there’s enough here for a few weekends worth of grindhouse marathons. Click the link here to buy some of this good shit. 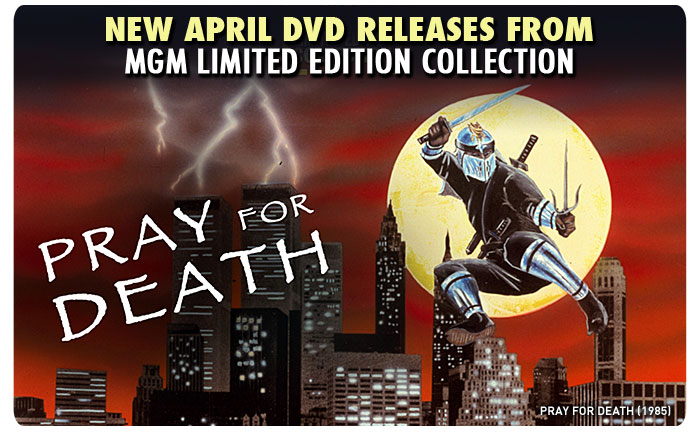 VICE RAID (1959) See “Hollywood’s Bad Gal,” Mamie van Doren play a prostitute who frames a decent cop for the mob. But when her sister is violated by some goons, she starts to question whose side she’s really on. Also stars Richard Coogan.

PHARAOH’S CURSE (1957) Before producers Howard W. Koch and Aubrey Schenck hit the big time and the A-list, their skill and craftsmanship vaulted a series of quickie fillers above the bar set for them by utilizing the budget-free ingredients of good ideas and good casts. Pharaoh’s Curse takes the standard mummy picture set-up and combines it with some blood-sucking terror to create something like The Thing From Another Millenium. With Mark Dana, Ziva Rodann and Diane Brewster.

PIECES OF DREAMS (1970) Cult favorite Robert Forster stars in this sensitive and engrossing tale of a young Catholic priest who falls in love with a social worker. The title track, sung by Peggy Lee, is now a standard, performed by Mathis, Streisand and Bassey, among others. With Will Geer and Lauren Hutton. 16X9 WIDESCREEN

PRAY FOR DEATH (1985) Here’s a simple test: We say “Eighties” and “Sho Kosugi” and you say — NINJA! The Ninja master himself is here to deliver up a deadly delight playing a simple Japanese businessman pushed by gangsters into opening up his can of secret Ninja whuppery. Also stars fellow Kosugi clan members Kane and Shane Kosugi. 16X9 WIDESCREEN

LOST ANGELS (1989) Son of noted playwright Israel Horovitz, Adam Horovitz (aka King Ad Rock of the Beastie Boys) plays a boy interrupted by a spell at a teen asylum. Donald Sutherland plays the shrink with the compassionate chops to pull the lad out of the snake pit. For the uninitiated, Beastie Boys is not a period Corman film. 16X9 WIDESCREEN

COCAINE: ONE MAN’S SEDUCTION (1983) The TV movie that took an entire generation down, down to the ground and caused a sensation doing it. Dennis Weaver plays the coke crazed man-next-door who sees his life crumble due to the Devil’s Dandruff. Also stars a young James Spader in one of his first roles.

SAMARITAN: THE MITCH SNYDER STORY (1986) West Wing fans may want to take note of Martin Sheen’s portrayal of the crusading reformer who gave a voice to the homeless in this made-for-TV biopic. Also stars Cicely Tyson.

THE RIGHT OF THE PEOPLE (1986) After a senseless slaughter during a restaurant armed robbery, a town votes to arm itself to the teeth. With Jane Kaczmarek, Michael Ontkean, Billy Dee Williams, and M. Emmet Walsh.

VIETNAM, TEXAS (1990) A priest fights to free the daughter he sired while on tour in Vietnam from a cadre of gangsters. With Robert Ginty, Haing S. Ngor, Tamlyn Tomita and genre veteran Tim Thomerson. 16X9 WIDESCREEN

FISH DON’T BLINK (2002) A couple on the run from the mob discovers that working for a family run restaurant might be a worse fate than sleeping with the fishes. With Lea Thompson, Richard Grieco, Wil Wheaton, and Dee Wallace-Stone. 16X9 WIDESCREEN

THE SIEGE OF FIREBASE GLORIA (1989) A recon patrol takes a hellish trek through enemy VC territory fighting for their lives as they wait for rescue. With R. Lee Ermey and Wings Hauser. 16X9 WIDESCREEN

VIPER (1988) Investigating her husband’s murder by a band of terrorists, a young widow uncovers a CIA military plot against an Arab nation. With Linda Purl and Dawn of the Dead’s Ken Foree. 16X9 WIDESCREEN

MODERN GIRLS (1986) Three young ’80s ladies are desperate to find out where the boys are. With Cynthia Gibb, Virginia Madsen, and Daphne Zuniga. 16X9 WIDESCREEN